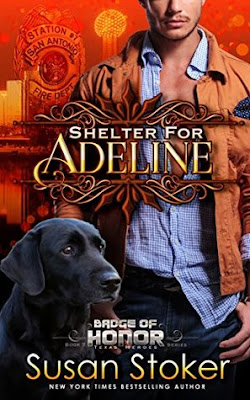 Saddled with a job she hates and a detestable boss she likes even less, Adeline Reynolds could use a break. It doesn’t look like she’ll get one today. Her service dog, Coco, is alerting her she’s about to have an epileptic seizure—and her frustrated blind date has left her to deal on her own. Enter firefighter Dean Christopherson, who escorts her to the nearby fire station, where she can suffer through her ordeal safe from injury and prying eyes.

Dean—known as “Crash” to his friends—didn’t expect to find The One in a diner during his lunch break, but he’s blindsided by the beautiful, brave Adeline. She brings out his every protective instinct—along with the carnal ones. As they get to know each other, Dean’s feelings for Adeline grow fast, as does his irritation with her boss, whose behavior is suspicious at best.

As much as he wants to protect Adeline from the world, Crash has to tread carefully. His overprotectiveness could push her away…and leave her vulnerable to a man whose obsession has reached the boiling point.

Have you ever read a book that flows like a river, in places its gentle as can be and when needed it flows like a raging river, well today as I read Shelter for Adeline, I felt like this book was like this river.
Dean “Crash” to his friends, did not believe he would ever find the one woman who fit him, that is until Adeline walked into the restaurant to meet a blind date.
Adeline has a job she loves and boss she hates, she also has medical issue that she feels has hampered her throughout her life.
Her service dog, Coco, is alerting her she’s about to have an epileptic seizure, just before her date leaves her at the restaurant, and here comes Dean to her rescue and from there on its like a wonderful thing to see happening to both of them.
Will they find a life together, will they overcome what awaits them. Just read the book, its a warm wonderful story and I thank Susan Stoker for the trip that I undertook reading this book.