Today we are spotlighting J.P. Cawood's
Love From Mars!

Signed up for J.P. Cawood's newsletter below for a chance
to win a copy of Love From Mars! She be will selecting 10 winners! 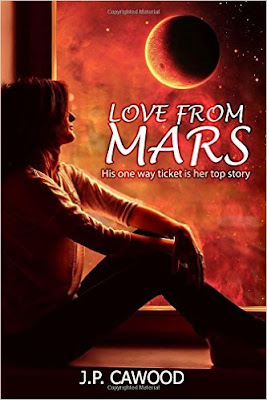 Six people have been chosen to colonize Mars, including the charismatic and noble Ryan Clarke. Emma, a headstrong reporter, meets Ryan at the Martian Six press conference. Despite the fact that he has a one-way ticket to another planet, they can’t resist their undeniable connection. When their secret affair is uncovered, they must suffer the consequences of the scandal they’ve unknowingly created. The day of the mission launch, their whirlwind romance is rocked by another shocking revelation. Can their love transcend all space and time?

Q & A with J.P Cawood about Love From Mars!

Tell us about Love from Mars.
Love from Mars is a science fiction romance following the first six people to colonize Mars. Emma is a determined reporter who hopes to launch her career by covering the upcoming effort to colonize Mars. Ryan is sweet, thoughtful, and about to leave the planet for good. When the two meet at the press conference, sparks fly, and both of their plans are interrupted by a whirlwind romance neither one had counted on.

What initially inspired you to write Love from Mars?
When I heard about the Mars One program, I thought about applying. I remember talking to a friend about it and they thought I was crazy. It got me thinking about what type of people would take a one-way ticket to another planet, and how that decision would affect their loved ones. Then, the entire story played out in a dream. I raced it write it down the next morning.

Tell us little about the characters Love from Mars.
Emma is headstrong and willing to do whatever it takes to excel in her career. She’s all about hard facts, which is a sharp contrast to Ryan, one of the men going to Mars. He has more metaphysical beliefs that conflict with hers. Emma also has a lot of unresolved issues from her past that come to the surface through their relationship. The other Martian Six are all really strong personalities that thrive in a reality TV competition environment, which is how the Martian Six were chosen. As a group, they’re very dysfunctional!

What was the hardest part of writing this book?
I always prefer writing the first draft or two, and then subsequent rewrites become less and less fun because it’s more mechanical and less creative. I did five drafts for this book so toward the end I was definitely excited to call it done. Even still, there’s always things that could be changed. But the most dreaded part of all was the formatting. I love the creative writing, but that’s really not all it takes. There’s so much more to be done! Luckily, the creative part of this book came very easily.

What was your favorite chapter (or part) to write and why?
The third chapter is my favorite because there’s a very romantic date with a unique twist. I won’t give it away, but even writing it, I was swooning. I am a romantic at heart, so I really enjoyed living those moments out with my characters, as if I was experiencing it through them.

What are your future project(s)?
I am currently planning production on an audio book for Love from Mars, as well as for my other book Sam & The Secrets of the Universe. I am also currnetly outlining my third book which is a science fiction for young adults. This new story has been brewing for a while and has seen a lot of iterations so it’s exciting to start locking down the approach so I can start writing soon.

Is there anything else you would like to tell the readers about this book/series?
I think it’s interesting to note that the tale has some surprising twists and turns. The narrative is set against a countdown, and the ending might not be what you expect.

JP Cawood has developed television series & pilots for Syfy Network, TLC, Investigation Discovery, Destination America, History Channel, Lifetime Movie Network, and Pivot/Participant. Now telling stories through books, JP writes science fiction/fantasy because the future is now and imagination is the key that unlocks all great mysteries. As a lifelong student of the mystical unknowns, JP has traveled the world in search of truth, beauty, and goodness. JP has lived in France, Britain, India, and many cities across America.

Giveaway
Sign up for  J.P. Cawoods newsletter for a chance to win a copy of her ebook. (10 winners)
Newsletter