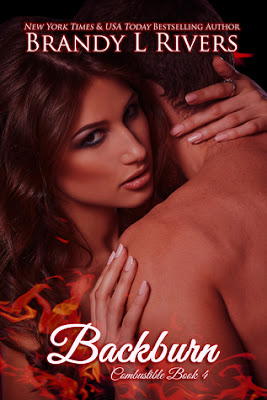 Sometimes to control a fire you have to start one.
A string of arsons has Officer Marissa Cortez willing to pair up with an old flame in order to find the firebug. She’ll do her best to ignore the chemistry that has never died.

He realized his mistake in the midst of danger.

Seasoned fireman, Dave Metcalf, has a sea of regrets. The biggest was pushing his now ex-wife away while recovering from a bad fire. With her illness, his son comes to live with him again, giving him a new perspective.

Watching a comrade go down pushes Metcalf to help in the investigation.

The spark never died between Marissa and Metcalf. They’ll have to work together to find the culprit and end the wave of destruction sweeping Lakeridge.

Oh where do I start with Backburn, it was a wonderful amazing romance. It had a little suspense, little laughs, some tears, lot of hot sizzling sex, it had a little of everything I love in a great read, kept me turning the page.

The flame blazed in Metcalf & Marissa’s passion eleven years ago, but circumstances burned it out, but eleven years later it ignited once again at a chance meeting, and flame was hotter than ever. Marissa is reluctant at first starting a relationship again with Metcalf, but Metcalf never gives up, he knows there is something still there between Marissa and him. I just feel in love with Metcalf’s little boy Ashton, he was a smart caring 10 year old, with everything he was going through with his mother, he wanted Marissa to be part of their life from the moment he knew she maybe his dad’s girlfriend. Now Ashton’s mother, Metcalf’s ex-wife was nothing but a witch (I really want to but a b instead of a w but I am being nice).

If you are looking for weekend read, a page turner, with a little suspense, a few giggles and hot steamy sex I recommend you pick up a copy of Backburn. You will not be able to put it down. Brandy L. Rivers has won a new reader in this gal! As soon as I can I am loading the other three books in Combustile series.

I receieved a copy for my honest review!