Today we are spotlighting Kasey Belle's
New Release A Swing And A Dare!

Enter below for a chance to win 1 of 5 ebook copies of
A Swing And A Dare from Kasey Belle!

Kasey Belle's New Release
A Swing And A Dare! 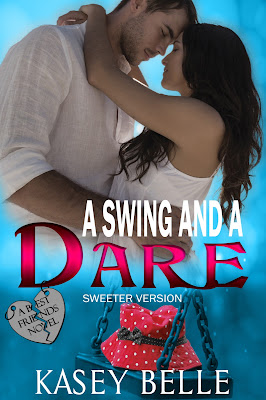 Navy SEAL Jack Claiborne and Veterinarian Abby Sutter have been best friends since the day they met on a school playground at the age of seven. Both have been secretly in love with each other since the opposite sex magically no longer had cooties and too scared of losing the other and their lifelong friendship to admit it.
When Abby is attacked, Jack is forced to face reality and admit, by allowing fear and what-if’s to influence his decisions, he’d failed them both. Jack realizes whether he made it “official” or not, losing Abby meant losing his heart. It meant losing his soulmate and that was unacceptable.
With the help of his teammates, Jack launches the most important operation of his life. The objective: To acquire Abby and a happily ever after for both of them. Failure is not an option, neither is death.
NOTE: This is a sweeter version of A Swing and a Dare, not a “sweet and clean” version. The love scenes are less graphic and explicit. However, it still contains the same plot, sweet, sexy, alpha heroes, and a sassy, strong heroine as the original. All books in the Best Friends Series stand alone. If you want the hotter sexier steamy read, check out the original version. 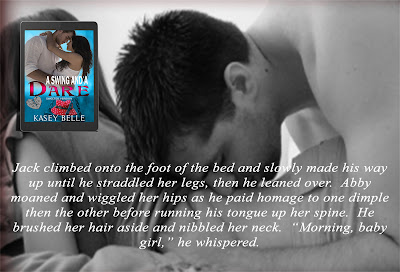 Q & A with Kasey Belle about A Swing and A Dare!

Tell us about A Swing and a Dare: The Sweeter Version, A Sweeter Friends Novel Book 1.A Swing and a Dare is the first book in the “Best Friends Series.” It begins with Abby’s first day in a new school. She meets Jack on the playground when he defends her against a bully. Through a triple dog dare, a broken nose, and a trip to the principal’s office a true friendship is born. They remained thick as thieves all the way through high school and their feelings grew into love. Even though life took them in different directions after graduation, their friendship never faltered, and although it was a secret they kept to themselves, neither did their love for one another. When Abby is attacked Jack realizes he can’t continue to live a half-life with her. She’s his soulmate and he could have lost her without her ever knowing he loved her. With the help of his team, he launches a mission to make her his.

What initially inspired you to write A Swing and a Dare: The Sweeter Version, A Sweeter Friends Novel Book 1.
A snippet of a real life occurrence. That little portion of this couple’s story represented a true fated soulmate relationship. I believe you have to be best friends and have a deep respect for the person you intend to love forever. Sex isn’t what holds soulmates together. It doesn’t help them weather the most destructive of storms. Friendship, respect, a true partnership is the only thing I believe can do that. You can’t truly love someone you don’t like.

Tell us little about the characters A Swing and a Dare: The Sweeter Version, A Sweeter Friends Novel Book 1.
Jack is a Navy SEAL and Abby’s best friend. He’s what I like to call a woobie. He’s a strong, sexy, alpha male whose very presence makes you feel safe, cherished and loved.

Abby is strong woman with a snarky, sarcastic wit. She was a lonely only child until she met Jack on the playground. She loves Jack. He’s her best friend, her anchor, no matter how many miles or continents separate them. She’s willing to forgo her heart’s desire to keep Jack in her life.

What was the hardest part of writing this book?
My other books are paranormal romances and I had a hard time not giving the MC’s super powers. I found myself wanting to turn Jack and his team into shifters or some other preternatural being.

What was your favorite chapter (or part) to write and why?
I actually have two faves. The first is the prologue, which tells the story of how Jack and Abby met as children. It’s so sweet yet typically adolescent, where a well-played dare could earn you an enemy or friend for life.

The second is when Abby finally learns the story behind how Jack got his nickname, Boy Scout. My muse took a rather interesting twist, much to Abby’s amusement. It works well with their dynamic. Abby and Jack don’t allow each other to take themselves too seriously and they have no problem giving the other a hard time if needed.

What are your future project(s)?
I have two books currently in the works right now, author gods willing, one will release in March 2017 and the other in April.

Sealing the Well, book 1 in my new contemporary series, Soulmate for a SEAL is Manny’s story. Manny is Jack’s roommate in A Swing and a Dare. There were no plans on my part to give Jack’s SEAL team their own books, but readers asked when is so-and-so’s book coming out? My automatic response was never, but that little voice in my head I call my muse (so it makes me sound less crazy) had other ideas and Manny found his soulmate.

Unexpected Triad, book 3 in my Copper Creek Pack Series is Kell’s story. Kell Creed is Head Enforcer for Copper Creek Pack and cousin to Declan and Cade the pack Alpha and Beta. Kell meets his match in his new triad partner and mate. It’s going to be an interesting ride.

Is there anything else you would like to tell the readers about this book/series?
All the Best Friends Series books (original and sweeter) are/will be written to stand alone. They won’t share characters or geographical locations. All the books are based on a snippet of a story on how a true life couple met. 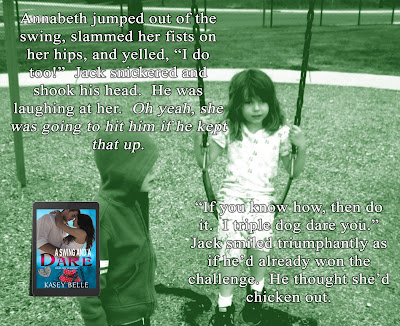 Now an exciting excerpt from A Swing And A Dare!

They exited the bathroom a half an hour later after he had his wicked way with Abby in the shower. He made love to her up against the tile. They washed and teased each other after and he thought briefly about dirtying her up again, but the water turned cold. Looking at her now, standing in the middle of his bedroom wrapped in a towel. Her freshly washed skin still dewy and pink. Her long hair hung in dark, wet waves over her shoulder, the occasional droplet of water falling from the ends. Her silky toned legs and small bare feet invited a riot of erotic images. Jack had firsthand knowledge how those legs felt wrapped around his waist, and how those tiny feet dug into the small of his back as he took her up against the shower wall. Jack bit back a groan, his temporarily sated cock, now at full mast. He wanted her again.
Abby cleared her throat. He met her eyes before she dropped hers to his towel covered erection. She returned her attention to his face. Abby arched an eyebrow, wagged her finger at him. “Don’t even think about it, Jack. I won’t be able to walk later.”
Jack shrugged and took step towards her, causing Abby to step back. “I’ll carry you anywhere you need to go.”
“Yeah, because that’s perfectly normal.”
He took another step in her direction and she retreated a step. “I don’t care what people consider normal. My definition of heaven is you in my arms for any reason. If that’s abnormal–” He shrugged before advancing another step. Abby tried to take another step back, the dresser behind her stopped her progress. She tilted that stubborn chin in defiance.
Jack was definitely up to the challenge. “We were well onto another round when the water heater cock blocked us.” He ran the tip of his finger over the soft skin of her chest just above towel. “You weren’t opposed to it in there” –he nodded towards the bathroom– “but you want me to believe you have a problem with it now?”
Jack’s eyes met hers and those brown depths heated with desire and challenge that screamed I triple dog dare you. Challenge accepted, Abby girl. He leaned in until the tips of their noses touched. Her panting breaths caressed his skin. “Look me in the eye and tell me you don’t want me right now as much as I want you. Tell me baby girl and make me believe it.”
Jack bit back a triumphant grin when Abby let out a needy whimper. He ran his nose along her cheek, breathing in her fresh clean scent. He made his way down her jaw until he was licking and sucking on her neck, her rapid pulse fluttered against his tongue. Abby threw her head back giving him more room to work. Her body trembled, and she dug her fingers into his shoulders. Jack released the towel, and it fell to the floor. He massaged her breasts, pinching her nipples between his thumb and forefinger. Jack kissed his way across her chest. A knock sounded at the front door, Abby froze.
Jack licked her cleavage. “Ignore it.” Jack murmured against her skin. “They’ll go away.” Just as the words left his mouth, the unwanted interloper rapped on the door again, then rang the bell. Jack ground his teeth. Fuck him sideways. Whoever was at his door was going to die.
Abby pushed at his shoulders. “Jack.”
“What?” He pressed his forehead to the swell of Abby’s perfect breast and sighed.
“Do you think it’s your parents already? What time is it?”
They glanced at the bedside clock, he winced. “Shit.” 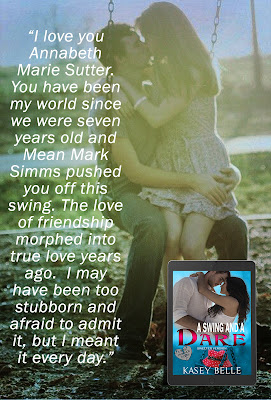 In 2015, with her family's encouragement, Kasey turned a lifelong dream into reality and published her first romance novel, Their Cajun Queen, Copper Creek Pack Series, Book 1, a paranormal shifter ménage. Since then four more of Kasey’s novels have found their way into publication.
Kasey promises her readers few things: sexy, woobilicious alpha males; strong, snarky, sarcastic, sassy heroines; lots of hot, steamy sex, and a happily ever after. In Kasey’s opinion, a good romance, is raw and honest, limited only by the author’s imagination, not dictated by what society deems as normal. Love is love, and all forms are beautiful.
When Kasey isn't writing and perfecting her craft, she is spending time with family/friends or kicking back with a bottle of Moscato. Kasey admits she's addicted to tattoos and books, and won't be seeking help.