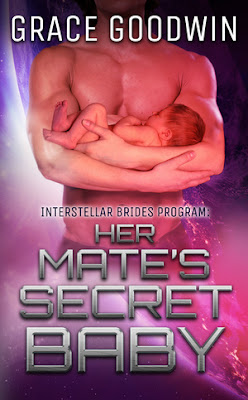 Natalie Montgomery wants a new life. While she may be rich, her life is empty. Her parents were never around, too rich and important to be bothered with a child. And when they present her with a emotionless fiancé, she's done. As a volunteer for the Interstellar Bride Program, she is thrilled to arrive on the hot, desert planet of Trion, and in the arms of a seductive warrior who makes her body burn.

Roark of Trion is not eager for a mate. Danger and the constant threat of war dog his steps. But one look at his new bride, and his mind is changed. Natalie is everything he ever wanted in a woman...so soft, so passionate, so submissive to his every need.
An attack on their outpost leaves Roark fighting for his life. For her protection, Natalie is transported back to Earth. Roark thinks she's dead. But she's very much alive and so is his newborn son. Natalie's anger and regret grows with each passing day her mate does not keep his promise to come for her. By the time he discovers his mistake, it may be too late to win back her heart.

Once upon a time, a young girl was born into an average, working class family. The wee little girl, convinced she was not an average child but was, in fact, a fairy princess, longed to leave the mundane world behind and live her dreams. She grew up, went to school, and when she'd grown too big to wear tutus and tiaras in public without drawing unwanted attention, turned to writing down her fantasies instead.
Now a bit older, her fantasies have grown to include sexually dominant men who know how to ensure a woman's pleasure. Grace believes all women should be treated like princesses, in the bedroom and out of it, and writes love stories where men know how to make their women feel pampered, protected and very well taken care of.
She currently lives in Oregon where she spends her days writing, and her nights in the arms of her very own Prince.