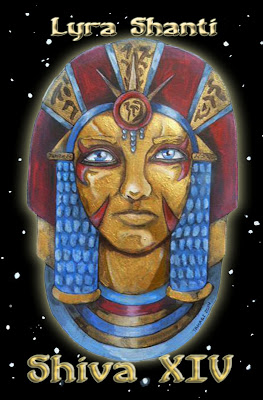 Prophecy rules, science rebels, and the fate of all depends on a boy named Ayn. Predestined to become the great messiah of his people, Ayn must save his galaxy from disease and war. But when an unknown enemy threatens everyone he loves, the destiny he thought was his spins out of control. Conflicted about his true identity, Ayn must choose his path, and before it's too late!

Book One begins with Ayn's birth and follows him as he discovers the world outside the palace he was raised. A coming of age story amidst galactic turmoil, Shiva XIV has action, romance, mysticism, and magical creatures. Join Ayn and his friends as his journey to become a heroic legend unfolds.

Q & A with Lyra Shanti about Shiva XIV!


Tell us about Shiva XIV.
Predestined to become the great messiah of his people, Ayn must save his galaxy from disease and war. But when an unknown enemy threatens everyone he loves, the destiny he thought was his spins out of control. Conflicted about his true identity, Ayn must choose his path, and before it's too late!

Book One begins with Ayn's birth and follows him as he discovers the world outside the palace he was raised. A coming of age story amidst galactic turmoil, Shiva XIV has action, romance, mysticism, and magical creatures. Join Ayn and his friends as his journey to become a heroic legend unfolds.

What initially inspired you to write Shiva XIV?
I was staring at the blank screen, feeling itchy to write, though I wasn’t sure what would come out of me. Out of nowhere, I saw a man in a priest-like robe holding an infant up to the stars in some sort of temple. I began putting the vision into words on the screen. Next thing I knew, I had a prologue and the first few chapters of what would become an epic story spanning four, possibly five books.

Tell us a little about the characters in this book.
The main character, Ayn, was born and raised in the “Holy Temple” of the planet Deius. He was sheltered by priests and told he is the second coming of their God, The Great Adin. He is also charged with saving his universe from rampant disease and greed. This pressure weighs heavily on Ayn as he grows up, and throughout the story, he must confront his true identity.


Helping Ayn make his way through the twists and turns of his complex fate is Zin, the rebellious prince of Ohr. Zin comes from the royal line of a science-based people, but all he wants to do is play music, favoring his heart over his intellect.

There is also Meddhi-Lan, Ayn’s teacher and father figure, as well as Pei, Ayn’s student-teacher and spiritual older brother. Pei goes through a big transformation during the story as he finds himself facing unknown dangers, as well as unforeseen romance.

What was the hardest part of writing this book?There is a moment in the story when Ayn goes through a very difficult situation. Without giving anything away, let’s just say he has to learn what it truly means to be free. Unfortunately, Ayn didn’t want me to write what I needed him to go through. So for awhile, I had “writer’s block.” It was less of a block, though, and more of a character’s refusal. I’m sure I’m not the only author out there whose characters come alive inside their heads, but mine really take over at times. It may sound a little crazy, but Ayn just wouldn’t let me continue the story, and he held my writing hostage. Finally, I gave in and agreed to his terms. Once I promised to give him what he ultimately wanted, he allowed me to write once more. Ayn may seem like a docile messiah on the outside, but he’s actually quite a force of nature!
What was your favorite chapter (or part) to write and why?
For book one, I loved writing the scenes with Ayn and his teacher, High Priest Meddhi-Lan. I find their relationship heart-warming and pure, and it reminds me of the type of father/son relationship I would have liked to have growing up.

What are your future project(s)?
The 3rd book in the Shiva XIV series is coming out this winter, and I am writing a new novel called The Artist, which is a story about a multi-talented artist who seeks to balance his marriage and career while fighting his own inner demons to do it. I’ve also begun a new YA fantasy series. I’m excited!

Is there anything else you would like to tell the readers about this book/series?
Shiva XIV is a unique mix of science fiction and fantasy with a metaphysical edge. With adventure, romance, and mysticism, the epic story takes you to places you’ve never imagined. I have loved every moment of writing the characters and their journeys, and I hope readers can feel that love within each page.

Meddhi-Lan sat upon the floor of his room and opened his private scroll. He remembered the
ordeal of The Bodanya's birth with fondness, yet also with sadness and concern. He dipped his pen, which only the high priests of The Dei could manipulate, into the plasma-ink and gave one touch to the scroll, which was all that was needed. The neon white soon became a visible, clear blue with the words written:
In the year of 12.120.47, our Lord, The Bodanya Shiva, The Second Coming of Adin, was given to us on this Day of Seed, the twelfth of Api.
He then meditated, focusing his thoughts deeper into his memory, trying his best to depict The Bodanya’s birth as accurately as possible. As the pen twitched, ready to write the
words from his mind, Meddhi-Lan mentally blocked the pen's movement as his thoughts could not help but turn inward with worry.
Holiest of Gods, is this your plan? he questioned in his mind. He did not wait for an answer, and was about to scribe more of his testimony into words upon paper, when Pei, his
student priest, knocked gently on the door. “Enter,” said the high priest while still in meditation.
Pei bowed halfway in reverence to his mentor. “My Lan,” he said, “Amun-Lan and some of the other priests wish to speak with you. They have requested that you meet them in The Holy Room.”
Meddhi-Lan opened his eyes, awakening to conscious thought as the plasma-powered pen gently fell onto the smooth carpet of midnight blue. “Tell me, Pei, do you think as they do about the matter in which they are concerned?” the high priest asked as he carefully watched his student.
“I know not,” replied Pei, trying not to offend his beloved teacher.
“You should speak your mind, young Ney,” Meddhi-Lan said while getting up to redress himself in his proper blue Dei robes. He then turned to his student and spoke, dead calm and
direct.
“You are frightened too. Are you not?”
Pei did not like to be referred to as “Ney,” for he was very near to reaching full priesthood, and soon would have the respect of his teacher, as well as the rest of The Dei. Nevertheless, he
understood his place and took a moment to respond, unsure of what his answer should be.
Finally, Pei replied, “Yes, a little, my Lan.”
“It frightens you... because of the unusual nature of his being?” questioned the high priest with his left eyebrow raised.
“Yes... and no,” said Pei shaking his head and feeling naive in his thoughts, which he knew his teacher would undoubtedly sense.
“Yes and no? I assume you are in a state of unbalance – of paradox - and not of the oneness of The Un?”
It was Meddhi-Lan’s way to gently tease his student. Pei was a highly intelligent young man, and near his attainment of awareness, but he still could not look upon his teacher with equal
mind. His robes were of red with no blue along their trimming, and he did not yet shave his forehead or wear the belt of a Lan.
Though he still had many doubts, he was loved like a son by his teacher and was Meddhi-Lan’s favorite among the student priests. “I… do not mean to speak in a paradox, my Lan. I simply have not yet come into the light. I admit, though, it is difficult to understand the meaning of The Un’s ultimate design when a child has been born to us who is so... unusual.”
“Yes, Pei,” said Meddhi-Lan as he gently rested his hand on his student’s shoulder, “and we must expect that there will be some opposition to my pronouncement that he is indeed the
reincarnation of The Great Adin.”
“Because of fear?” Pei asked nervously.
“Yes,” replied Meddhi-Lan, “and also because of the length of time that has passed before his return to us. It has been hundreds of years since The Bodanya has chosen to live and walk
upon our planet - so many years, in fact, that The Council was already in disbelief when Amya gave birth to him.”
“But she was the woman to conceive amongst the white flowers in the time of The Great Adin’s rebirth,” argued Pei unnecessarily.
“Yes, she was,” replied Meddhi-Lan with a slight smile.
“And so the prophecy has been fulfilled.”
“Of course,” sighed the high priest as he placed his unfinished scroll back into an oval chest that hung on the wall. “It has all been written and prophesied, my young student.”
“Then…” said Pei as he forced himself to ask, “why was the Bodanya born with… both male and female flesh?”
Meddhi-Lan winced at the rawness of Pei’s question. He stared at the ancient blue and silver chest on the wall, adorned with the holy markings of The Dei, as if looking for an answer
within its design.
“This was not foreseen… was it, my Lan?”
The high priest slowly turned to face his student.
“No, Pei. It was not.”

Author Bio:
Lyra Shanti is a novelist, poet, playwright, and songwriter who currently lives in Florida with partner and spouse, Timothy, and their two insane cats. Further information about Lyra's stories, music and more can be found at www.lyrashanti.com and www.shivaxiv.com.
Social Links
Facebook  Twitter