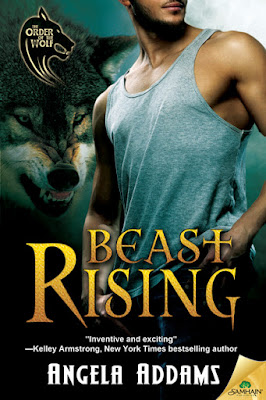 My Huntresses aren’t the kind of girls who like to follow the rules. Neither am I when I can help it. Being the rule breaker isn’t always about stirring up trouble just for the hell of it. A good rule breaker knows when it’s time to toe the line for the sake of the pack and when it’s time to poke the wolves out of their comfort zones.

Here’s an excerpt from Beast Rising that I think shows the Huntresses in rule breaking mode.

They’d decided to play hunt and seek. Aubrey’s idea, as usual. The boys were out and about, roaming the forest, playing, eating bunny rabbits, whatever it was they did during the day, and the girls were bored. Well, bored with training.

“Okay, what exactly are the rules of this game?” Hannah asked as she sheathed her throwing knife into the belt at her waist. She looked skeptical, forever the killjoy.


Darcy sighed. “It’s like hide and seek, but instead we track the boys. See if we can sneak up on them without them knowing.”

“But they’ll smell us from a mile away.” Summer leaned against a tree, looking exhausted.

“Come on! Have a little faith!” Aubrey said. “We’re Huntresses! This is what we were born to do! Besides, it’s good training.”

“And I can cloak us,” Darcy added with a smirk.

“Aren’t you at all curious to find out what the boys are up to when they take off all day?” Aubrey circled the two deadbeats, nudging Summer with the tip of her bow as she moved around the tree. “Don’t you wonder what they look like when they’re running around, how they interact with one another? Whether they stay together at all?”

Summer perked up a bit, pushing herself off the trunk. “Yeah, actually, I do wonder about that.”

“We can track them, but only if Hannah plays too.” Darcy nodded toward the redhead. “You’re the best at it.”

That wasn’t exactly true—Aubrey was getting pretty good at following the markings of other kinds of creatures. She’d been doing it her whole life, but Hannah did seem to have a natural affinity for it. Her magical abilities to read emotions seemed to help somehow.

“I’m telling you, they’d pick up on us way before we pick up on them,” Hannah said with a sigh, her tone suggesting defeat.

“I don’t think so,” Darcy said. “I think they’ll be too caught up in their own activities to notice us coming and I also think that we have an advantage because they won’t be expecting us. Come on, Hannah. This will only be fun if you come along.”

“It might be fun, actually, Hannah,” Summer said, her eyes alight.

Hannah looked at each of them in turn. Darcy guessed, what with her being the alpha’s mate, she felt some duty to keep them in line. But really, what was the harm in a little hunt and seek?

“We won’t leave the property.” Darcy crossed her fingers behind her back. “Promise.” Hannah held her stare for a heartbeat before finally relenting. “Okay, let’s do it.”

“I’ve got to find my knives.” Summer moved with precision around the training area,plucking each of her knives from the targets and trees she’d thrown them in.

“How do you do that?” Darcy watched with growing awe. She knew vaguely where her weapons ended up when she threw them, but was certain there were a few that missed targets that she’d never be able to find.

“I etch on them.” Summer shrugged. “I like my blades. Dy gave them to me. Don’t want to lose them, so I etch a locator symbol on them. It’s pretty handy.”

“That’s fucking brilliant!” Aubrey said. “I’m going to need you to do that with mine.”

“Why would we need to weapon-up if we’re not leaving the property?” Hannah’s voice was full of suspicion.

Darcy had already turned away, which was good because she couldn’t stop herself from wincing. She busied herself with shoving a few more knives in her belt.

“Come on, Hannah, it’s better to be prepared. It’s not like we have protective wards keeping other beasties out.” Aubrey bent to retrieve a couple of arrows, sparing a wink for Darcy.

“That’s true. I should probably do something like that, huh?” Summer gathered a few more knives for her belt.

Darcy shared a knowing look with Aubrey. They were so breaching the boundary. They wiped their lips of any smile before turning to face Hannah.

“We need to be prepared, of course. But we’ll play it safe. We know the property boundaries. Mayhem showed us all. We won’t even go near them. Now get over here so I can dose you all with a little magic cloaking,” Darcy said.

They were a good team, despite Hannah’s hesitation. Between her and Aubrey, they managed to track both Jaylon and Raven without the pair realizing the girls were even there. They instinctively knew they couldn’t speak to one another—not with the boy’s super sensitive hearing. No one said a peep as they gazed at the wolves. Both Jay and Raven were napping in the sun on two large boulders in a clearing. There were remnants of a large deer at the edge of the tree line. Darcy tried not to think too hard on Raven consuming raw meat. She’d make extra sure he brushed his teeth before she called in that rain-check, though.

Aubrey nudged her then motioned for them to get moving. They all wanted to track the big prize. Mayhem.

Darcy nodded, took one last look at the peaceful form of her mate and then edged back through the brush she’d been hiding in. Once she was standing, she could still see Raven through the trees. He looked so peaceful. Content. She wanted to curl up with him and bask in the sun’s warmth.

Aubrey rustled a branch to get her attention, then made a face for her to snap out of her daze.

She checked her weapons then started after the girls.

A scream came at them like a freight train. Long, terrifying. They all stopped. Eyes wide.

“What the fuck was that?” Summer whispered.

“Where did it come from?” Darcy’s body was shaking. The sound of the scream... And then it happened again, this time cut short with a gurgle.

“That way!” Aubrey was moving before Darcy even registered what was going on.

“Wait, Aubrey!” Darcy turned, looked through the bushes for Raven only to see that the boulder was empty, no wolves lying there. “Fuck!”

The Huntresses are stepping up their game. So are the forces arrayed against them.

Embracing the Huntresses could mean death to the wolves who love them.

The Order of the Wolf, Book 7

Mayhem is furious. While he and the boys have been rocking it out on stage at a series of concerts in Scotland, Darcy and Aubrey have been sneaking out for, as they so defiantly put it, "training."

Raven is cut to the bone when he discovers what Darcy's been doing behind his back. But simply forbidding the women from hunting isn't the answer. Though it makes him uneasy, he talks Mayhem into joining forces to train alongside their women.

Training is in full swing when they encounter a pair of ancient Huntresses battling each other with powers Darcy and the girls can only dream about. Taking sides turns out to be a mistake when Darcy and Raven are kidnapped, and an evil plan is put into play to use the girls' powers to unleash Lazarus, the king of the beasts.

The only way to defeat him is for the Order, Huntresses, and Wolves to put their mutual mistrust aside and unite. Or the world could be flooded with an unending river of feral beasts.