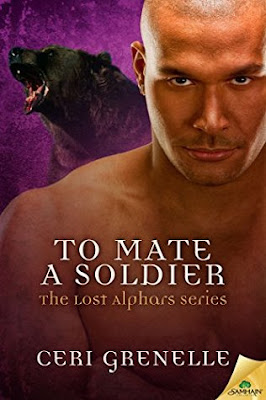 Lottie Braddock has let everyone believe she’s a widow wasting away from mate sickness. In reality, she struck a devil’s bargain to conceal her young son’s true identity—a protection spell that feeds on her life force.

She plans to take one secret regret to her grave—until that regret crashes through her clinic door with one of her children in the throes of a premature shift. Desperate for more time, she sets out to find that devil once again and plead for her life.

Jeremiah Quinn, head soldier of the North American Weres, doesn’t take orders from anyone. But damned if he’s letting the ailing, fragile Lottie make this journey alone. He’s known for years she is his mate, and he’s through letting her push him away.

Come hell or high Magic, he refuses to let her go without a fight. For her life. For her love. For the love of her sons. Even if saving her soul means sacrificing his own.


Warning: Contains a healer who’s sacrificed all she has for her family and a steadfast soldier who isn’t afraid to prove he’s been a part of that family all along.

Lottie Braddock struck a bargain with A Daemon to protect her son Evan who was born with the full powers of a Alphar. She plans never to reveal this to anyone, but desperate for more time with her son Evan and twins she sets out on a voyage to find more time.
Jeremiah Quinn the main soldier of the North American Weres finds himself in love with Lottie and determined to help her on her journey.
The story was well written, but too many characters to keep track and to try and understand what was going on, for me anyway. Can't put more in here as it would give the plot away, but it is well writen and interesting.