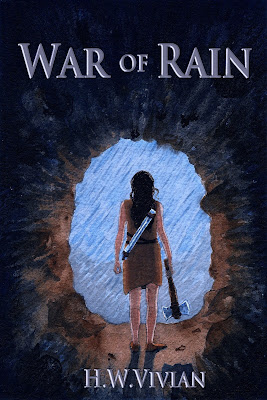 Have faith in the chaos.

Fifteen year-old Miri lives in a desert village called Boreala, which competes with the city of Stratos for Rain – the equivalent of Holy Water. During a confrontation while gathering Rain, Miri accidentally kills a citizen of Stratos, and unintentionally starts a heinous war. Now it is up to her to find the God of Rain, Kalono, and ask Him for an invention that can bring both peace and war before Boreala is destroyed.

Tell us about War of Rain.
It is about Miri, a young girl who goes on a journey to find an invention that brings both peace and war. She had no choice but to do this after accidentally starting a war between her village and another bigger, meaner one. Her journey becomes unexpectedly spiritual.

What initially inspired you to write War of Rain.
I had a dream about this storyline when I was 19. I started writing it, but then put it down while I went through college and building my work experiences. The conflict between Christianity and Islam in the United States during 2014 was what ignited my inspiration, and made me go back to finish this.

Tell us little about the characters War of Rain.
The best way to describe the characters is that they are indigenous people of mixed races in the future. They all look similar to each other, and are scattered throughout the world, but share similar cultural values.

What was the hardest part of writing this book?
Imagining a world without God and spirituality.

What was your favorite chapter (or part) to write and why?
I loved writing all the chapters. Miri’s journey to deepen her spirituality was my journey get closer to my spirit as well.

What are your future project(s)?
I have many manuscripts already completed, and they are all based on spirituality and also philosophy. If readers enjoyed War of Rain, I believe they will enjoy my future publications as well.

Is there anything else you would like to tell the readers about this book/series?
For those who are not very in touch with spirituality, I hope this book, and the two companion novels after it, will help them understand it better, and how different it is from organized religion.

H. W. Vivian is the author of the YA fictions, Chasers and War of Rain. Her latest work, The Goddess: A War of Rain Novel, was released in May 2016, and is an accompanying story to War of Rain. She also writes general fiction under her pseudonym, Alex Chu. Novels written under this pseudonym include Days of Amber and the more recently released Monarchs. Follow her on Facebook and Twitter to receive the latest news on books.