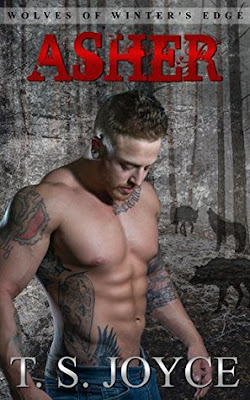 ****Don't miss this thrilling final book in the bestselling Wolves of Winter's Edge trilogy****
Asher Striker is full of dark secrets. His brothers think he’s quiet because he’s moody, but Asher had to learn at a young age that if he doesn’t focus on controlling the power within him, he could destroy everything and everyone around him. All he needs to do is help Gentry and Roman open up Winter’s Edge, and then go back to his solitary life. It would be safest for everyone that way. But when a mouthy, funny, beautiful woman shows up at his inn, Asher begins to rethink where his life should be headed. Ashlyn makes him want things he can’t have. She’s wrecking his focus, but little by little, she’s also breaking down his walls and easing the darkness within him. And now he has to decide whether her fixing him is a good thing, or something that will get them all killed.

Ashlyn Jenkins has a bone to pick with her best friend, Blaire. She’s on a mission to save her from the three obvious psychopaths she lives with now. Sure, the Striker brothers are hot, especially the oldest, Asher, but Ashlyn’s duty is to her friend, first and foremost. That is, until she realizes Blaire is very different from the way she used to be. Now, the more time Ashlyn spends with Asher, the more she wants to unravel the mysteries around him and the life Blaire has built for herself. And when she witnesses the darkness that dwells inside of the quiet, silver-eyed, growly giant, she thinks she might just be able to save him. But Fate has plans for her and Asher that will change the course of not only their lives, but also the town of Rangeley forever.

Wow even the day after am still thinking about the book, the story and the characters. I read the other two book and mind you they were good, I loved them but Asher. The story blew me away.
The story was so intriguing that I just kept reading and reading. There were times I laughed and then cried. Gentry, Roman and Asher a three brothers that have returned home, yet what awaits them is incredible. The pack that has taken over the town is to say the least bad very bad.
Loved all the brothers but my favorite is Asher.
He has so much power and tries hard to control it, but touching well that is not done, Enter Ashlyn who came rescue her best friend, who by now does not need rescuing.
But Asher, his wolf and the rest are totally taken and intrigued by her, Asher knows he should leave her alone, but he can't stay away from her and keeps coming back for more of her. Things as alway come to a head, the Striker brothers their mates find themselves in a battle for their lives.
A lot of things are revealed towards the end, things that will surprise you and astonish you and make the book that much better.
T.S Joyce thank you for a fantastic and amazing adventure, I loved it and look forward to you next book.