Today we are spotlighting Barnaby Hazen's
Seven Eleven Forgotten and
Other Stories! 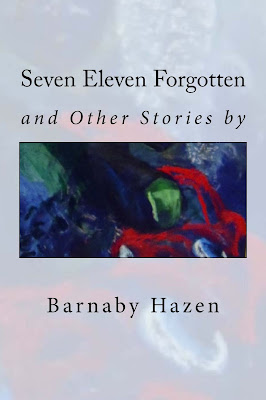 The innovative use of convenience store phenomena weaves these nine strange tales together. The book follows a recurring character throughout the collection, Alex Aronovich, whose knack for romantic folly plagues him from L.A. to Moscow. 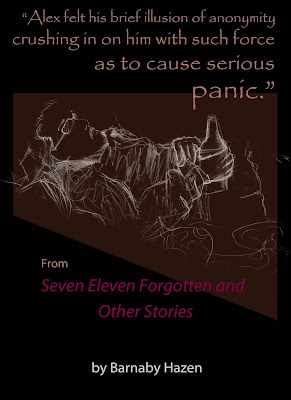 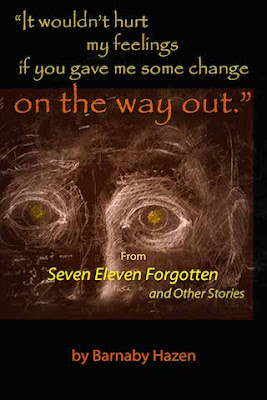 Q & A with Barnaby Hazen about Seven Eleven Forgotten and Other Stories!

Tell us about Seven Eleven Forgotten and Other Stories.


This is a collection of short stories, and one novella. Here’s the thing that’s thrown some reviewers off--I could have sworn I prompted them the same way but no disrespect--there is a through story, about a guy named Alex, and leading to the novella and the title story--”Seven Eleven Forgotten.” The key is, if the name of the story actually has “Seven Eleven” in it (“Seven Eleven Ceremony,” “Seven Eleven on a Boat”) it’s about Alex. The others are just convenience store themed tales.

Is there another common thread, besides the convenience store relationship? I say yes, some reviewers say either yes or it doesn’t matter, and some say no and that’s damning. Think what you will--the collection stands and I’m very happy with it as it stands.

What initially inspired you to write Seven Eleven Forgotten and Other Stories?

It was an idea I came up with a couple years ago, just a way of framing short stories. It was an inside joke because of how often I visited these places, these late night places--often while I was writing. Also, because especially late at night, but also generally, these little stores attract strange stories themselves, and so lately there have been some submissions to the periodical that are actually based on real stories that happened at a 7-Eleven store, or a similar place. I’m excited to see people out in the world attracted to this same idea.

If your readers know of a story like this, whether they are writers or not, they can use this link to submit it to us: http://www.sevenelevenstories.com/submissions.html

Tell us little about the characters Seven Eleven Forgotten and Other Stories.
So as I mentioned, there are quite a few if you read through the 12 or 13 stories--but I’ll stick with the “Forgotten” theme. Alex is very isolated, and we don’t actually learn a lot about the people he is close to, because we are looking mostly through his lens. He is depressed--and he is a drunk. He has taken a decent stab at film-making but when he hit a certain number of disappointments something shut down in him, and he’s just sort of been roaming, and drinking ever since.

He’s got a great friend named Jake. He talks Alex into going into rehab for a bit--he’s very non-judgemental and maybe that’s why Alex has let him get close.

He has an ex named Ana--a sharp spitfire who is maybe let’s say reckless. It’s hard to know what’s going on between her and Alex because both are very guarded by the time they meet, and then have another run in--and another.

Deciding it was done. It went on a very long time--I had no separation of roles in place so I would edit, and that would turn into an added part or two or a rewrite of another section. It was really very dizzying and exhausting. I don’t have any regrets though because I seem better now at compartmentalizing my roles as author and editor. It was a wild ride, it’s funny now but it was very difficult finally letting go of the thing and calling it “Soup.”

Everything after about half way through the novella, “Seven Eleven Forgotten,” was unplanned. I had no idea where it was coming from I just kept going and I had a huge bunch of fun with it because I was letting go and along for a ride myself, almost as a reader.

I have a series coming out called “Misfortunes of T-Funk.” It’s three parts, and it’s about two musicians, childhood friends, writing songs together and knocking on the door of the music industry. It will be out in April and if those anyone signing up for the newsletter to win a copy of Seven Eleven Forgotten and Other Stories will get word about it as it comes out. The first one is free, the eBook anyway--not sure whether I’ll go to print until the whole series is out.

One other thing about this--there will be REAL MUSIC to accompany the book. So as these poor bastards trudge along trying to make a go of it throughout the series, some of their music will be accessible to the reader.

Now an exciting excerpt from Seven Eleven Forgotten and Other Stories!

“To fluent readers, the Cyrillic alphabet is said to differ from the Latin-Roman alphabets in how they are each decoded. While the native Spanish speaker, for example, may look at words and recognize their shapes at a glance, those who read in Russian are reading in blocks, particularly the non-cursive writing most often used for signs and billboards in the cities. Walking around and looking up at all the messages, some lit, some painted, some faded and others inescapably gosh in color and brightness—it can feel as if one is surrounded, especially in one’s first few days off the plane.

Though the same sky is above those words as it is above New York, Los Angeles, or Paris, the colors within the atmosphere of Moscow mingle and taint the eyes. The toxic fumes and endlessly bright lights cities have in common seem to differ from one to the next, yet infinitely more so in Moscow, as the sky reflects back on the messages the signs sent up to that open space at an incomprehensibly fast rate; only to be sent back down making even less sense at the leisure of the atmosphere. The clouds, neither entirely natural nor manmade are therefore illusions of unfamiliar shades of purple, red, pink and black, depending on the mood of the city. One’s own moods and emotions are tiny yet intertwined with the scenery; one’s own thoughts, dictated by the atmosphere and emotions in response, seem more insignificant the longer one gazes; yet those thoughts are the only tool available in the seductive struggle to comprehend where one stands, and what one is doing there.

All the while the smells, the industry, the pastries, the meats; the sewage, the cars, the perfumes and the sweat; the taste in one’s mouth mingles with every molecule the nostrils endure and produces something at the back of the throat—a mixture of manic wonder and desperation as such has been tasted maybe twice in one’s life, yet it is so familiar, so familiar to the tongue it has to indicate something regarding one’s destiny—a great change or even death—it has to be just around the corner. But maybe not this corner; maybe the next.”
Author Bio:

Barnaby Hazen is an author, editor and musician, with two music degrees and many recordings under his belt. He founded the Seven Eleven Stories periodical in 2014. He also writes and edits for an education based journal, The Bud Hawthorne Revue, along with Mr. Hawthorne himself. His first full-length book is out on Amazon: Seven Eleven Forgotten and Other Stories. This book was the founding concept of convenience store fiction.