Girl Breaker
Break On Through Series #3
by
Harper Kincaid 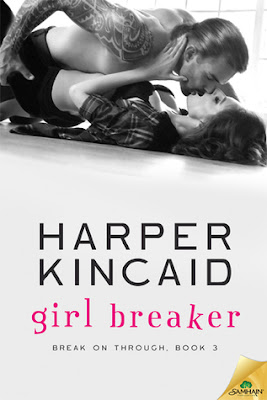 Sometimes the best thing a good girl can do is make a bad decision.

Jessica has always been the girl with her head in the clouds and her nose in a book, only dating the “nice guys”. But when rough-around-the-edges Viking-biker-god, Mad Max, and his precocious little girl move onto her street, Jessica falls hard and fast for both of them.

Max is no stranger to women wanting to share his bed—and he’s always been more than happy to oblige them all. He’s lived wild all his life—that is, until a daughter shows up on his doorstep and he meets a redheaded angel down the block.

There’s nothing more he wants than to claim Jessica as his, to bring the gorgeous spitfire to his bed. But a man like him doesn’t get a happy ending with a woman like her. He’s got a whole other life, one he’s kept secret for good reason.

If Jessica found out what he really is, there’s no way she could love him. He should keep his hands to himself. But he’s Mad Max—he’s never done the right thing, and he’s not going to start now.

Warning: Contains a dominating alpha male who’s a lot more than he seems, and a good girl with a swirl of flavors under her vanilla.

Jessica was a book lover, a day-dreamer & hopeless romantic dreaming off her soulmate. Her life the last year have been one traumatic episode after another, with losing her parents in an accident and her sister’s abduction, but the sunny side of her life was her Viking bike god neighbor Max and his spitfire, lovable ten year old daughter Piper. Jess kept having fantasies about him but knew with the revolving door of women, biker chicks, strippers, etc., going out of his door when his daughter wasn’t at home she wasn’t his type. Or was she.


Max lived a dangerous life before his daughter Piper came into his life when her mother died of cancer. He doesn’t let any women into his life due to his past, but Jess is gradually knocking the walls down, with the help of Max’s 10 year old daughter Piper. And he has been fighting it for months now, he doesn’t want to complicate Jess’s life with his past. Will he keep fighting is feelings for Jess or will he eventually give in and not judge a book by it’s cover.


Girl Breaker was a very enjoyable read it made me laugh especially that little spitfire Piper, I just fell in love with her because she reminded me of my daughter at that age. The chemistry between Jess & Max was hot, just say Max figured out not to judge a book by a cover. Jess may had been prim and proper and never sweared but she was a hellcat when they were together. The interaction between Max and his daughter was awesome, you could just feel how much he loved his daughter and cared for her. Sam, Jess’s sister had me wanting to go through the book to strangle her when she said what she said about Jess and Max’s relationship but she did redeem herself later. I really want to rate this book 4 stars instead 3.5 stars but I just can’t it was told by Jess and how she was feelings, if Max was telling how he felt during certain parts, especially the parts when Jess gave him a piece of her mind and if the ending wasn’t so rushed I was expecting more after the last chapter instead of the epilogue, I would definitely would have given it four stars. Would I read another Harper Kincaid book most definitely.