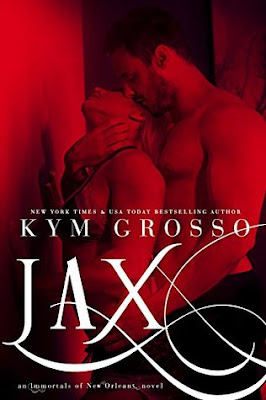 JAX (IMMORTALS OF NEW ORLEANS, BOOK 7)
Agrestis Wolves’ Alpha, Jax Chandler, is on a mission to exact retribution after being captured and tortured by an enigmatic adversary. When the sophisticated publishing mogul rescues a beautiful wolf, he recognizes the woman he’d once believed to be his mate. Captivated, he sets out to discover her secrets and teaches her to embrace submission.

From New York to New Orleans, Jax and Katrina embark on a dark and sensual adventure, discovering sorcery that could eradicate his entire pack. With their lives in danger, they search for clues to release her from the ominous prophesy. Will they survive the predator that comes ever closer to destroying their lives? And will Jax acknowledge the bond to a woman he never imagined he could trust to be his mate?

Was there another Immortal that I could fall for, oh yes and here is the sexiest of the wolves so far.

Jax Chandler Agrestis Wolves’ Alpha, is looking for revange on his kidnaping and that of Katrina Livingston whom he rescues from a fate worse then death.
Katrina was the one that a long time ago he thought was his mate, but things got in the way and they never connected, or did they.
He still finds that despite all the lies and all that happened he is attracted to Katrina and set out on a journey of discovery hoping he can trust her again and find what they felt once.
With Alpha blood running through her veins, Katrina Livingston’s shifter magic has been systematically stolen over time. She now is on the run from who wishes her harm, linking with Jax they both set out on finding out what is harming her and trying to kill Jax. With adventures between New Orleans and New York they set out on a adventure and also hoping that what they felt once was not just imagination but also real.
Will they be the mates they are supposed to be, will they survive what awaits them?????