Stacy will be awarding a digital copy of Riding High to a randomly drawn winner via rafflecopter during the tour. Please visit GoddessFish.com to follow the tour, remember the more you comment better your chances on winning. 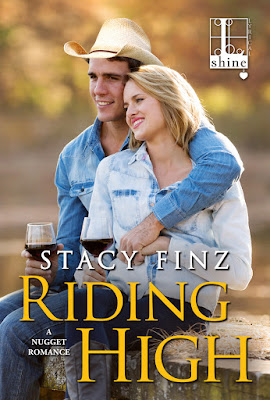 When it's time to get back in the saddle again, there's no better place than the picturesque mountain town of Nugget, California . . .

A financial whiz with her own advice show, Gia Treadwell is passionate about helping people maximize their potential. But when her boyfriend--make that ex-boyfriend--steals millions with an epic Ponzi scheme, Gia is promptly run out of town. It's the perfect opportunity to revisit an old dream--one that apparently involves naked cowboys . . .

Flynn Barlow didn't expect anyone to walk in on him showering at the empty ranch where his family's cattle have always grazed. Even more surprising, the new ranch owner plans to turn it into a residential training program for women who need a hand up. A smart, gorgeous woman with a worthy cause? In Flynn's experience, if it seems too good to be true, it usually is.

Sharing the ranch doesn't mean Flynn and Gia have to get along, but riding together isn't the problem. It's the scorching chemistry they can't ignore. And if they figure out a way to add trust to the mix, they'll soon be sharing more than just a ranch . . .

Unconcerned that she had a firearm aimed at his center mass, he gave her a brazen once-over. Then he motioned his head at the gun. “I don’t think it’s loaded, but you should never point a weapon at someone unless you mean to shoot him.”

“I’ll shoot you.” It was a bluff. If push came to shove, Gia didn’t think she could pull the trigger.

Again, he eyed the rifle with indifference. “Yeah, I don’t think so. Otherwise you would’ve removed the safety.”

“Give me your pistol,” she said. He looked confused. “The one in the bathroom.”

She wasn’t getting anywhere near him. “Back up real slow.”

He glanced behind his shoulder. “Where we going?”

“Yeah? Sounds good.” He flicked his gaze over her, eyeing her from head to toe. The guy thought he was a real comedian. “Why don’t you let me—”

“Not now.” She needed to concentrate and was reevaluating the bedroom idea. But that was where her cell phone was. Gia hadn’t seen a landline since she’d gotten here. She lifted the rifle so that the muzzle was pointed directly at his chest.

He rolled his eyes but mercifully kept quiet. They made it to the master suite without incident and with one hand Gia held the rifle against her shoulder, using the other one to search her purse for the
phone.

Eureka! She punched 9-1-1 with her index finger, put the phone on speaker, and dropped it on the bed so she could resume holding the rifle with both hands.

Gia would’ve sworn she saw her captive snicker. She promptly ignored him and told the operator her situation. The cavalry was on its way, thank goodness.

“You think I could put my shirt on before the cops get here?” 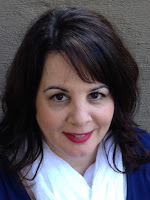 Stacy Finz is an award-winning reporter for the San Francisco Chronicle. After more than twenty years covering notorious serial killers, naked-tractor-driving farmers, fanatical foodies, aging rock stars and weird Western towns, she figured she finally had enough material to launch a career writing fiction. In 2012 she won the Daphne du Maurier Award for unpublished single-title mystery/suspense. She lives in Berkeley, California with her husband.