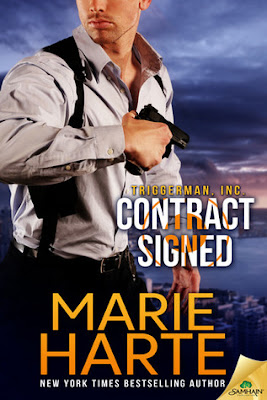 Three assassins and a… baby?

Noel “Ice” Cavanaugh’s method is foolproof. Get in, do the job, get out, melt away without a trace. Chill out until his next mark is assigned. Neat. Tidy. No mistakes.

This time, though, something isn’t right. Two somethings. First a random attack that feels not-so-random. Then he discovers someone’s left a baby on his doorstep with a note claiming it’s his. And the sexy neighbor who found the boy first has too many questions in her eyes to ignore.

When her handsome, mysterious neighbor suddenly asks her out on a date, Adeline Rose has suspicions he’s fishing for “help” with his bundle of…joy? By date’s end, she’s convinced Nick’s just as distant as he seems—until a scorching goodnight kiss ends with sex against the nearest wall, the heat between them burning away all thoughts of careful.

Now Noel has more than one problem on his hands. Splitting baby duty between three badass assassins, figuring out how to fit more time with Addy into his no-room-for-error schedule…and keeping both of them safe from the danger he’s increasingly sure has followed him home.

Product Warnings
Beware a killer with a heart of gold, a baby who needs constant changing, and unrequited love that’s actually quite…requited.

Wow what a read! Contract Signed had suspense, action, romance, laughs and lots of steamy sex what else would you want in awesome suspense romance. Marie Harte has me hooked on the Triggerman Inc series with this first installment. And she also has gained a new reader and fan in this gal.

Noel “Ice” Cavanaugh is contracted assassin to help clean up the world of the evil. Adeline “Addy” Rose is an elementary teacher & Noel’s neighbor. Both have been attracted to each other from afar for a couple years but never admitted until Noel’s acquaintance Deacon ask Addy out and Noel steps up and ask Addy out, and boy do the sparks fly and an inferno erupts between Addy and Noel,

I enjoyed watching the relationship between Noel and Addy develop and all the ice around Noel melting into a lake. He became a totally different man when he finally admitted to Addy there was something there between them. I loves the interaction between the three bad-ass assassins Noel, Deacon and Hammer with the baby nobody would believe they were contracted killers, especially Deacon. Talking about Deacon you can tell there is a storm brewing between him and Addy’s friend Solene, I cannot wait to watch Deacon, the Don Juan of the three, fall. The suspense has me chewing on my nails for the next installment of Triggerman Inc to see what danger has followed all three bad-asses home on their downtime and who truly is the baby’s father.

I recommend you pick up a copy of Contract Signed if you are a fan of Marie Harte or a fan of suspense romance you will not be disappointed, and like me trying to wait patiently until the second installment comes out.