Enter below for a chance to win an ARC of
Las Vegas Sidewinders: Toli & Tessa from Kat Mizera 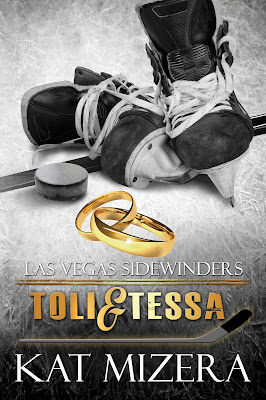 After a whirlwind romance, Las Vegas Sidewinders forward Anatoli Petrov is finally going to get his happily-ever-after. With everyone they love in attendance, he and his fiancée Tessa are getting married—and he's pulling out all the stops to make this an event no one will ever forget.

Tessa Barber couldn’t say no when the sexy Russian hockey player who stole her heart insisted on having the wedding of the year. When someone with an axe to grind shows up and wreaks havoc on their special day, events unfold that make her wonder if Toli is the man she thought he was.

From the bright lights of Las Vegas to the cold streets of Moscow, Toli and Tessa become embroiled in a complex and terrifying web of deceit. Tessa isn't sure who to trust - including her new husband. Toli isn’t sure what’s going on with his wife, but before he can fix his marriage he has to figure out how to keep the situation in Russia under control. Will they be able to figure out the truth or is it a game misconduct for them both?

Since this book is a essentially a continuation of book 4 in the Series, Anatoli, I felt there was more to their story. Toli is probably the most popular character in all the books, so I thought it would be fun to have a second book with him. Especially since he and Tessa had a fairly easy relationship and fell in love rather quickly. Plus no one else on the Sidewinders has had a formal wedding, so I got a kick out of having Toli be the one who wanted a really big wedding.

It also helped to tie up some loose ends from books 4 and 5, even though this isn’t the end of the series. A lot of the storylines and characters were intertwined and this gave me the perfect way to bring it all together. Although there will be a book 7, I’m taking a break from this series for a while and this was a good place to leave it until I get back to it.

Toli is a Russian hockey player who’s lived in the U.S. a long time. He’s quirky, funny and extremely loyal to his friends. He refers to himself in third person when he’s tired or upset, and his fiercely over-protective nature makes him a favorite of both other characters in the books and fans of the series as well. He became single in the first book of the series when he found out that the woman he’d been dating on and off for 18 years was in love with his brother, but handled it with his usual grace and sense of humor. Now that he’s met the love of his life, he’s more lovable than ever.

Tessa is married to her college sweetheart and when she and Toli meet in Book 4, her husband has just filed for divorce out of the blue. She’s a good girl who’s only ever slept with a couple of men before Toli, and desperately wants to have a one-night stand. Things don’t go according to plan and she’s horrified when she finds out that he plays for the same hockey team as the husbands of her two best friends from college (characters we meet in books 2 and 3). She has a little girl, Raina, who’s the love of her life and although she falls in love with Toli, she’s really torn about her daughter growing up in a broken home. Her decision to give her husband a second chance is both stupid and endearing because she puts her daughter’s needs first.

When Toli & Tessa get married in Book 6 it feels like a fairy tale because they’re so perfect for each other. Of course, things never go as planned so there are a lot of twists and turns that show us a lot about the inner strength of the characters. This is romance, so everything works out in the end, but it requires both of them to grow and learn--both about marriage and each other.

Keeping straight all the issues with the KGB/MGB and the Russian mob. There were a lot of convoluted details so I had a bunch of different beta readers going through it to make sure it was easy to understand because I started to get confused in some parts.

There are a couple of parts that I love, but one of my favorites is during the big climax towards the end when Toli is trying to send his son, Anton, to safety and Anton refuses to leave his side even though they believe Toli is about to be killed. The bond between father and son is so strong, and never more so than in that scene. Though he’s only 16, Anton shows the kind of love and maturity you might expect from a child of Toli’s, and it was really stirring.

The Sidewinders are a fictional hockey team, but they’re also a family. I realize this isn’t necessarily reality, but this is romantic fiction after all, and in reality, if you ask any professional hockey player, they will say that the team is their family too. My fictional team just takes that relationship to the next level. The guys have each other’s backs both on and off the ice and their wives/girlfriends are tight too. Not all the women are 22 and a size 0, and the guys aren’t all over-the-top alphas either. I tried to take the fun things of romantic heroes and heroines but tone it down a little to make them characters you can lose yourself in. I’ve got a woman who’s 11 years older than the man who falls in love with her, a female Marine who comes back from Afghanistan with burns over 40% of her body and a widow who’s an ex-stripper that now has a Ph.D. These women run the gamut and I hope you enjoy them as much as I enjoyed writing them!

They moved towards the door and Tessa watched helplessly as Toli paused, turning back to her.
“I need a moment with my wife,” he said quietly, meeting her gaze. “In the hall?”
She nodded, walking out behind him and looking up into his face.
“I may not have another chance to say this,” he said after a slight hesitation, reaching for her hand and bringing it to his lips. “I know I made a mistake, but I love you, Tessa. I never believed there was such a thing as another person making you feel complete—I thought that was romantic nonsense that people wrote about in books and movies. Then I met you and realized it was true. I’m sorry I hurt you and I hope I have the chance to make it up to you.”
“Toli…” Her voice broke and she moved against him, burying her face in his chest. “I don’t care about what you did—we’ll get past it—just go get Anton, okay?”
“I will.” He palmed her cheek with his hand. “Remember that I love you—always.”
“I love you too.”
“If something happens to me, get out of Russia immediately, do you understand?”
She nodded.
“Promise me, Tessa. I don’t know what they want or what they could possibly want from you if I’m dead, but if I don’t come back, you get out of here no matter what you have to do.”
“I promise.”

Kat's a typical PTA mom with a wonderful and supportive husband (Kevin) and two amazing boys (Nick and Max). When she's not writing, she's either scrapbooking or indulging in her second love (after writing) - traveling. Greece is one of her favorite places in the world. She loves that Athens is a big city with a small-town feel. The food, beaches and culture keep her going back as often as possible. She hopes to retire there one day so she can spend her days writing books on the beach.

Kat has been a working freelance writer for nearly 30 years. She sold her first article--a review of a rock concert--for $10 in 1985. Since then she's been an entertainment journalist, waitress, bartender, legal assistant, food critic, magazine editor, substitute teacher, and sports writer. She also spent some time working at A & M Records in Los Angeles.

As you can guess from her series, the Las Vegas Sidewinders, Kat loves hockey. She is also a freelance hockey writer, covering her favorite team, the Florida Panthers, and any other teams that have an interesting story. The rest of the time, she writes novels: sexy, romantic fiction that she hopes makes you as happy as it makes her. There's something enticing about hockey players and romance...