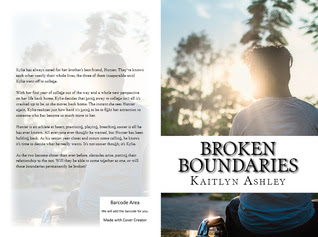 Kylie has always cared for her brother's best friend, Hunter. They've known each other nearly their whole lives; the three of them nearly inseparable until Kylie went off to college.

With her first year of college out of the way and a whole new perspective on her life back home, Kylie decides that going away to college isn't all it's cracked up to be, so she moves back home. The instant she sees Hunter again, Kylie realizes just how hard it's going to be to fight her attraction to someone who has become so much more to her.

Hunter is an athlete at heart; practicing, playing, breathing soccer is all he has ever known. All everyone ever thought he wanted, but Hunter has been holding back. As his senior year closes and scouts come calling, he knows it's time to decide what he really wants. It’s not soccer though; it’s Kylie.

As the two become closer than ever before, obstacles arise, putting their relationship to the test. Will they be able to come together as one, or will those boundaries permanently be broken?

Let me start by saying congratulations to Kaitlyn Ashley on her debut book Broken Boundaries. This was a very short read, if I wouldn’t had been battling a bug I would have had in done in a couple of hours, instead of a day.

I liked the book but what I didn’t like was the first few chapters of repetition between narratives, I would just scan right over it. Maybe I was just a little too old for this book, cause some of the incidents I was shaking my head at, especially the secret for her coming home to go to school closer. When she finally divulged her secret, I was like REALLY you were depressed because of that. I was expecting something much bigger than it was. Plus I just didn’t feel the chemistry between Hunter and Kylie, no build up to what they were feeling, it was bam “I love you”, maybe I am wrong but once again I am from another generation, we usually had a little more foreplay we just didn’t just bam take our clothes off and bam it was over. The end should have made me cry but once again I didn’t feel the characters come alive in the ending I wish I could but I am sorry I couldn’t. I feel the author has very good potential, I wish her luck in her writing career. Oh yeah it was a cliffhanger, be warned.

I received a copy from the author for my honest review!