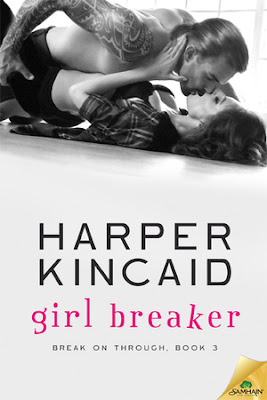 Then his mouth came down, and I immediately opened for him, making him growl. His kisses started off hungry, insistent. It was as if he had been starved and needed feeding. He strengthened his grip on my hair, maneuvering to accommodate wherever his mouth wanted to explore: my lips, my long neck, the underside of my jaw.
“I can’t get enough of you.” His lips and tongue dragged across my skin, making their way down the deep V of my dress’s neckline as he rubbed the tip of his nose in my cleavage. “Jesus Christ, you smell like heaven.” He lifted his torso from mine to lower my dress straps. I lay there, topless, my small breasts heaving up and down under his penetrating gaze. I moved my hands to cover myself, thinking my body must look like a joke compared to the voluptuous women he’d had in his bed. But he read what I was doing and moved my hands away, pinning them under his.
“You’re beautiful. Don’t hide from me, baby.” He swallowed hard, his words sounding like they were getting stuck in his throat. And just like that, I let go of any lingering insecurities that haunted me.
He was like my own fallen angel, one who’d weathered a few storms along the way, with his perfectly mussed, dirty-blond hair and slightly scarred features. I shivered as his rough and calloused fingertips dragged across my skin, from the apple of my cheek on down to the hollow of my throat. He lingered at that spot for a beat, caressing the indentation, his gaze so intense I felt it burn.
“In this bed and from now on, we don’t hide. You got it?”
I nodded, hearing every word he said, but I was just trying to remember to breathe. No matter how much air I took into my lungs, it seemed the oxygen wasn’t getting to my brain because, even lying down, I felt like I was falling. He must have noticed because he placed his palm right in the center of my sternum, and gently pressed down. My heart was pounding like a jackhammer, so insistent and loud that I could see his hand pulsating from its rhythm. I let out a laugh at a higher pitch than I’d like, and he gave a beautiful smile in return.
“I guess I’m a little nervous,” I whispered, and he let out an easy laugh of his own..”
He leaned his weight, chest to chest, resting on his elbows. The pads of his thumbs naturally found their way to my temples, slowly stroking back and forth as he lovingly gazed into my eyes, still with a smile on his face.
“Nothing to be nervous about,” he answered. “It’s just me.”
“But you’re everything,” I blurted out.
He stilled and I immediately panicked. “What I mean is—”
“You meant it. Don’t take it back,” he said. Then, his mouth was on mine and if I had any resistance, his touch melted it away. The way he kissed, it was like he couldn’t get enough of the way I tasted and felt; the feeling made me even more lightheaded than before.
He lifted off me just enough to tear my dress down and away from my body and then strip off his own clothes. When his skin touched mine again…when I felt the weight of him settled on top of me, my anchored and lonely heart shed its barnacles and debris. And as he entered my body, some floating, wandering piece from deep inside finally clicked into place.
I was home. I was home. I was home.


Girl Breaker (Break On Through Book 3) by Harper Kincaid

Sometimes the best thing a good girl can do is make a bad decision.

Jessica has always been the girl with her head in the clouds and her nose in a book, only dating the "nice guys". But when rough-around-the-edges Viking-biker-god, Mad Max, and his precocious little girl move onto her street, Jessica falls hard and fast for both of them. Max is no stranger to women wanting to share his bed—and he's always been more than happy to oblige them all. He's lived wild all his life—that is, until a daughter shows up on his doorstep and he meets a redheaded angel down the block.

There's nothing more he wants than to claim Jessica as his, to bring the gorgeous spitfire to his bed. But a man like him doesn't get a happy ending with a woman like her. He's got a whole other life, one he's kept secret for good reason. If Jessica found out what he really is, there's no way she could love him. He should keep his hands to himself. But he's Mad Max—he's never done the right thing, and he's not going to start now.

Warning: Contains a dominating alpha male who's a lot more than he seems, and a good girl with a swirl of flavors under her vanilla

A woman with the heart of a revolutionary,
The mind of a pragmatist,
And the inappropriate humor of your tipsy BFF...
Born in California and raised in South Florida, Harper Kincaid has moved around like a gypsy with a bounty on her head ever since. Along the way, she has worked as a community organizer, an art teacher, a popular blogger, and a crisis counselor (to name a few). All the while, longing to have the guts and follow-through to do what she really wanted: to write and become a published author. That wish has finally come true and she's tickled hot pink.
When not writing, she adores listening to indie, lo-fi, complaint rock played on vinyl, the theater, well-informed optimism, happy endings (both kinds), and making those close to her laugh 'til they snort. She is a self-admitted change junkie, loving new experiences and places, but have now happily settled in the cutest lil' town, Vienna, Virginia.