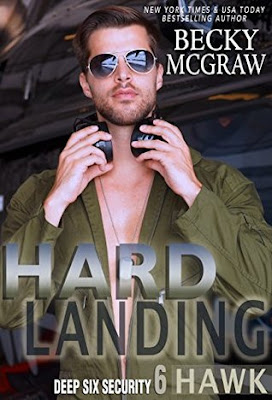 When Maddie Carter comes back from the grave, will Hawk have a fresh start with the one who got away?
Former Army Nightstalker pilot Rhett Hawkins knew the day would come, but he had hoped it wouldn't be until after he was gone. Maddie Carter was destined to die young, because that is just how she lived. She flew by the seat of her pants and flying was all she cared about. He'd learned that the hard way.
But after her memorial service, Hawk just couldn't get the feeling that something was wrong with the recounting of the events that led to the crash and her supposed death. Neither the helo or the other three bodies had been found. It drove him insane until he decided to do some investigation of his own. After getting conflicting stories from her two surviving crew members, he knew he had to go the full distance to settle his mind. It wasn't because he was still in love with her or anything, he just needed closure. Or at least that's what he told himself when he took a month off from work at Deep Six to go to El Salvador.
Once in Central America, Hawk infiltrates the gang her unit was trying to take down and realizes there is much more going on than the Army knows. Not only is her now blacked-out helicopter back in service, Maddie is behind the stick and under the gun to make drug runs for the gang.
Maddie is not the same, she's scarred, hardened and has no memory of him at all. He has to convince her she needs to be saved, but will he get himself killed in the process? Or will he save the only woman he'd ever asked to marry him?

Former Army Nightstalker pilot Rhett Hawkins was sure that the day would come, but truly had hoped it would not be until he was gone. Maddie Carter was destined to die young, only because that is how she loved, she flew by the seat of her pants.This book shows clearly what a good story should have, love, loyalty, service, pain, disappointments, basically what life can dish out its in the book. Maddie is shot down taken by the Cartel, severely injured and has a baby, thank god that Hawk wanted proof of her death and with her brother went looking for for her.Many things still stand in their way for a happy ending, but its worth reading it and seeing what journey Hawk and Maddie go.I received a free copy for my honest review!Review by Jara