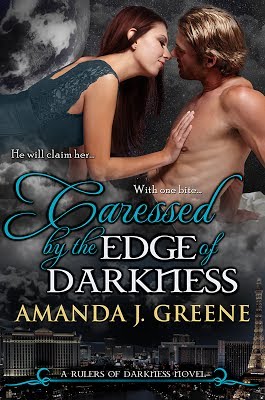 Hardened by centuries of torture, former blood slave, Gabriel Erhard, is driven by an insatiable need to destroy his enemies. Violence darkens his battered soul, leaving no place for mercy in his world. Gabriel’s only desire is vengeance—until he finds her.

Seized by vampires, bound as a slave, and placed on the auction block, Jordan Culver is instantly entranced by the dangerous male who claims her. Jordan’s new captor vows to set her free, but his haunted gaze burns with savage desire and his wicked kiss makes her crave his touch and...complete surrender.

While Gabriel battles his enemies, he will break every sacred law to achieve his ultimate goal—uniting the Outcast Society and creating a new vampire Clan. But the distracting human with mesmerizing violet eyes jeopardizes his plans. With very soft whisper she evokes his tormented memories, testing his sanity and challenging his every boundary. Can Jordan help him overcome the miseries of his past and find a future with her?

What started as hmmm I am trying to figured out book, it turned into something that I could not put down.
The story evolves around Gabriel Erhard and Jordan Culver. Gabriel hardened by centuries of torture is now drive to destroy his enemies, this same want for revenge darkens his soul and leaves no room for mercy. All he wants is revenge that is until he finds Her.
Jordan was seized by vampires, she is now bound as a slave and is placed on a auction block, but a handsome man rescues her from this fate, but her new captor vows to set her free, but his gazes at her show a desire she never seen or felt, and his kisses make her want this man more then anything.
Gabriel now not only battles his enemies but also must keep Jordan safe, she is begins to mean more and more to him and still he can't phantom why.
Will Gabriel win over his enemies and will he be able to keep her safe, read the book its a great story and the characters are superb.

Amanda J. Greene creates paranormal romance for ravenous readers. She lives in Southern California, where she enjoys escaping the rewarding but hectic world of writing by spending time in the sun and sand with her military husband and their two dogs.