Release Day Celebration: It Started with a Whisper Box Set by Various Authors

Lady X's gossip sheet tells all and it leaves everybody talking.
All new material out January 23rd – It Started with A Whisper Box Set
Follow the blitz and enter to #win a $15.00 Amazon Gift Card 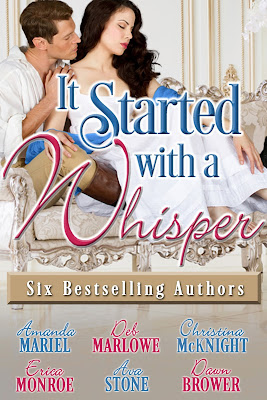 
Rumors, gossip, and secrets all have a way of unraveling at the worst possible time. Follow each story as it leads you through a path of mystery and intrigue. Lady X's gossip sheet tells all and it leaves everybody talking. The rumors have the potential to ruin lives and with each whisper a new scandal arises.

Will those who find themselves the subject of her scandal sheet escape unscathed and discover who Lady X is along the way?

One Moonlit Tryst by Amanda Mariel Lady Tabitha Pemberton wants nothing more than to enjoy her first season without becoming attached, but when Lady X writes of a forbidden tryst between Tabitha and Colin Brooks, the earl of Harcourt, everything changes. Now Tabitha must choose between her reputation and her desire to remain unattached.

Love Me, Lord Tender by Deb Marlowe Lord Tensford has an old title and an empty purse. He knew it would be difficult to find a Society bride, but after Lady X heeds baseless rumor and brands him Lord Terror, it's next to impossible.
Until he comes to the aid of Lady Hope Brightley, causing Lady X to re-dub him Lord Tender.
Now he's a laughing stock and a fortune hunter. But Lady Hope means to repay him and help him find a bride. In the end, will she turn him over to the perfect mate? Or ask him to . . . Love Me, Lord Tender?

The Lady Loves a Scandal by Christina McKnight Many years ago, Gideon Lyndon, Viscount Galway, made a grave mistake. On the verge of rectifying this misdeed, he finds himself faced with his greatest challenge yet: winning back the woman he has loved since the moment he met her. But after a year of silence, convincing his headstrong paramour Sybil Anson to take him back will not be easy. Especially since he can't even explain why he left--not if he wants to keep her safe.

The Scandalous Widow by Erica Monroe Bow Street Runner Gabriel Sinclair has spent the last three years trying to forget about smart, beautiful Lady Jemma Forster, Countess of Wolverston, who broke his heart when she married his best friend. Her husband's death thrusts Gabriel and Jemma back together, as they work to find his murderer. Their investigation takes them into the darkest, most dangerous parts of London. They're perfect partners for solving crimes, but can they be partners in love too?

How to Land an Earl in Ten Days or Less by Ava Stone Known for his silver tongue, Reese Delacy, the Earl of Darling, wagers that he can make any girl fall in love with him in less than a fortnight. Unfortunately, the boast catches the ear and subsequently the pen of a notorious gossip columnist, making Reese a pariah in short order. He seems doomed for failure until he meets a Bermudian beauty who is seemingly unaware of the scandal.
With control of the Caribbean salt trade hanging in the balance, Miss Cara Beckett, left her home to solicit the support of parliament, never imagining she'd become embroiled in a reckless wager.

A Lady Hoyden's Secret by Dawn Brower Lady Helena Carter has a secret. She dare not reveal it and court her own ruin--or incur the wrath of Lady X. Oliver Hunt, the Marquess of Dashville has problems of his own regarding the Lady of Whispers, and only Lady Helena can help him. As they cross paths, desire sparks between them. Their budding romance is tested as secrets are uncovered, and the revelations will either bring them closer together or tear them apart forever.