Siren In The City
(Texas Sirens #2)
by
Sophie Oak 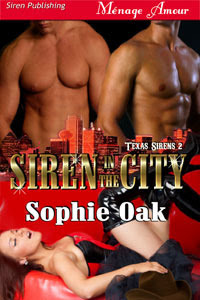 A call from his mentor forces Jack to revisit the club where he discovered his sexuality. Jack's half-brother is in the city and interested in a little blackmail. Can Jack handle two defiant subs and a brother in need of tough love?

Sometimes all it takes to find the way home is a little love and a lot of bondage.

Ok this is not the type of book I ever thought I would read, but heck was it a good story.When the Dom's away...the subs will play! Jack and Sam married Abby. That was suppose to be forever, but since Jack took a bullet meant for her, he has somehow distanced himself from her and from Sam.This was not what she and Sam had wanted, now she wondered if Jack was tired of her worried hi still loved them both. A call from Jack's mentor sends him to the city, things take a turn for the unexpected, Jack's half brother is in town and bent on blackmailing him and his Mentor.Can he deal with this and with both of his sub's coming to town and being defiant. And a few more surprises thrown in to make the story far better then it is.I received a free copy for my honest review!Review by Jara