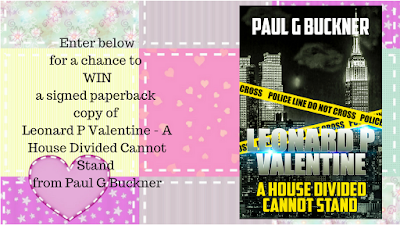 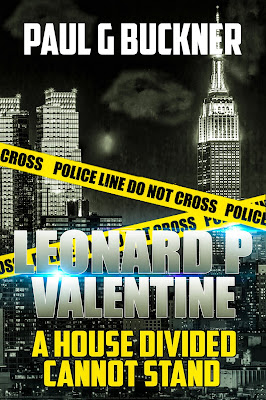 When one of the most important and influential men in New York City is murdered in the diner where Leonard P Valentine works, Leonard is forced to decide between telling the cops all he knows and risk retaliation or playing dumb and giving up nothing. The gritty detective, Frank O’Conner isn’t making it easy on him when Leonard chooses the easy way out. O’Conner suspects Leonard knows more than he’s telling. A lot more! Armed with a quick wit, a sarcastic sense of humor and a photographic memory, Leo fights for survival on the tough city streets. A beautiful blond investigative reporter not afraid of anything tracks him down, and soon the pair is working together, but can this unlikely pair survive long enough to bring down the ruthless killer and expose the real puppet masters pulling the strings? Find out in, "A House Divided Cannot Stand."

Synopsis:
Leonard P Valentine is no ordinary short-order cook…
Leonard P Valentine is a street savvy, short-order cook at a New York City diner, known by its regulars as “Greely’s Slop Shop.” An orphan, never knowing his father and a mother he can’t remember, Leonard bounced around a string of money hungry foster homes before finally escaping to the streets on his 18th birthday. An introvert by nature and fluent in sarcasm, Leonard enjoys being a fly on the wall in a crowded room. Invisibility and a quirky sense of humor are his defenses.

After witnessing a mob assassination of the powerful County Commissioner, William Wood, Leonard finds himself at the center of the investigation as the police's sole witness, a place uncomfortable and unwelcome.

When the young and sexy investigative reporter, Lexi Osborne steps onto the scene, Leonard is drawn into a secret world of blood money, corruption, power, and influence as the pair work together in an attempt to bring the vicious murderer to justice. Leonard soon finds himself falling for the quick-witted and feisty reporter. But what could Lexi ever see in him? After all, he’s just an invisible short-order cook at a greasy spoon diner.

Danger and intrigue follow Leonard around every corner keeping him looking over his shoulder not knowing who to trust or who to count on. Then he meets Detective Frank O’Conner, a hard-nosed cop with a healthy respect for the law. Leonard must decide if the detective is an ally or just another cop on the mob’s payroll.

I’ve been a huge police detective tv show nut since Magnum P.I.and Simon and Simon. I have always wanted to write a mystery series with young characters that, by pure happenstance, get involved in solving crimes. I think one of the biggest reasons for my love for the genre is because of the emotional ride and the adventure, the thrill or rush like being on a roller coaster. Good versus evil where the lines seem to blur. Why do they blur? What makes the lines so difficult to see? Until you are put into a particular situation, you may never understand. I wanted to create a series of real to life characters that are relatable and fun as well as someone that we may choose to live life through vicariously even if only a few hours. Seeing what they see, feeling how they feel. Experiencing the entire journey through their eyes. A good mystery is more than a solving a good puzzle. It’s also about the characters that solve it with us as we become their silent sidekicks.

Tell us a little about the characters in Leonard P Valentine - A House Divided Cannot Stand.

Leonard P Valentine is a young, energetic, adventurous and exciting young man; 22 years old, brown hair, thin and a bit lanky. He grew up in state care mostly, lots of foster homes so he has a bit of a fence he’s built out of sarcasm and a ‘leave me alone’ attitude, yet he’s curious and friendly. Leo has a great memory for details which helps him with so many facets in life. An introvert, but likes being around people.He’s complicated.. While he’s not much of a conversationalist, he still has a need to be in the middle of the action. Hopefully, no one notices him. That’s the way he likes it; invisible. Truthfully, though he doesn’t admit it because he doesn’t completely understand it himself, but he’s scared of being alone.  Just shy of six feet tall. He’s usually wearing faded Levis with red chucks and a t-shirt and lives alone in a dingy apartment.

Lexi Osborne is a young rookie reporter from the local newspaper covering the story of the murder. Leonard in smitten by her, but doesn’t feel that he’s even in her radar because of their socioeconomic differences. She comes from a white-collar professional world and...well, he doesn’t. She’s looking to crack the case and get the scoop to prove to her boss that she has what it takes to be an investigative reporter. Her unfiltered curiosity may just get them both killed.

Frank O’Conner is a Hard Nosed Detective is hell bent on cracking the case and doesn’t seem to mind stepping on toes. He’s fair, but cuts no favors. He’s tough as nails and doesn’t back down from anyone including the mob. He can be trusted to do the right thing. What he deems as righteous, so one must be careful trusting him.

The ending! I knew how I wanted the storyline to play out, but there were so many different options that fit naturally.

Chapter 1, the opening sequence has to be my favorite by far. Introducing a cast of young, energetic characters with vibrant and robust personalities was a lot of fun.

What are your future project(s)?
I’m currently working on the second book in the Leonard P Valentine series. Even more, young and exciting characters are in store for fans!

His meaty jowls disappeared, and the back door slammed shut again just as the bells from the front door rang again. For a Monday night, this place was beginning to be a lot like Grand Central Station or something. At first, I thought it might be the lady from earlier coming back in because she had changed her mind, but after a quick glance, I knew better. Normally, I would have averted my eyes and pretended not to notice until they took a seat, but it wasn’t hard to figure why I froze in my tracks this time. Maybe it was the scent of her perfume or the click of her heels on the peel and stick tile. Whatever it was, she was one of the most beautiful gingers I had ever seen. I was glad for the high counter top between the kitchen and the dining area on account of she couldn’t see me staring at her and see the drool running down my chin.

She was an older lady, maybe in her late thirties or early forties, dressed in a short black skirt wrapped tight around her hips and a white blouse underneath a small black jacket. Her long, red hair had big curls flowing out over her shoulders from under a black fedora. The kind of hat you would see a man wear with a pin-striped suit, only she wore it cocked off to one side and looked a hell of a lot better than any fella could’ve pulled off. She had a two-strand pearl choker around her neck with a black and white broach in the center of it. The high heels she had on were shiny black and must’ve had taps on them because I’ve never heard anything on this floor before, except for the squishing sound of shoes being peeled off the sticky surface when you tried to walk on it.

I didn’t dare move because I didn’t want her to see me staring like a puppy ready to play fetch. I froze in place. I must’ve looked like a pervert; I’m sure because I felt like one at the moment. She looked around but didn’t see me leering like a jackass from my hidey hole, my sniper’s nest. It’s a good thing too because I think I went slack-jawed at the same time that my pants got tighter. I’m glad I have this wonderfully hand-crafted, made-in-Pakistan, grease stained apron on over my white t-shirt hanging down to my knees; otherwise, I would’ve, undoubtedly given my ‘glad to see you’ swagger away. And those lips… wow, was all I could think of. Ah, those plump…shiny…red…delicious lips... sorry, I lose focus sometimes.

Paul G Buckner is a Native American author and active outdoorsman. He has traveled to and lived in many places from east coast to west and resides in Claremore, Oklahoma.  Paul attended Northeastern State University where he graduated with a B.S. in Business Management and a Masters of Business Administration. He spent several years developing curriculum and teaching business management principles to Native American non-profit groups and volunteering countless hours of community services.