The Crossing Place
by Karen Ankers 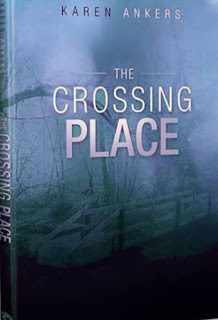 The Crossing Place is a love story with dark edges. A desperate decision made by a young homeless couple has far-reaching consequences and years later, Laura finds her mundane life disrupted by a series of unsettling dreams. When she meets Paul, a handsome and charismatic past-life counsellor, she refuses to accept his suggestion that these dreams might be memories from a previous life. One particularly difficult dream has her turning to him for help and advice, but revelations about his past make her question whether she is able to trust him. When danger comes from an unexpected source, both Laura and Paul have to deal not only with very real threats in the present, but also doubts and fears from the past.

Tell us about The Crossing Place.

The Crossing Place is a contemporary love story with dark edges, set in Chester.  At its heart is a desperate decision made by a young homeless couple, which has far-reaching consequences.

What initially inspired you to write The Crossing Place?

After reading Brian Weiss’ book, Only Love Is Real, many years ago, I became fascinated by the subject of reincarnation and about love transcending lifetimes.  Then I started thinking about how complicated life would be if lifetimes overlapped.

Tell us little about the characters in The Crossing Place.

There are two storylines working side by side, so there are five main characters.

Laura is frustrated with her mundane life, and marriage to a man she no longer loves.  But she does not expect her life to change so dramatically and so suddenly. She has learned to be independent, but finds herself in a situation she has no previous experience of, and has to decide where to turn for help.

Paul is a past-life counsellor.  Handsome and charismatic, he prides himself on his ability to help people, and finds it difficult to cope when his integrity is challenged.

Sadie is sixteen years old and pregnant when she finds herself living on the streets.  Desperate for a home for herself and her baby, she makes a difficult and ill-advised decision.

Tom is Sadie’s boyfriend.  He tries to do his best for his young family and finds himself drawn into an agreement which will have far-reaching consequences.

The hardest thing, for me, was trusting the characters enough to let them make their own decisions!  There were many times when I tried to make the story go a certain way, only to realise that I was going against what my characters would actually do in those circumstances.  Once I learned to trust them, the story flowed quite easily.

The ending was my favourite part.  Not just because it meant all my hard work was over, but because it felt good that the characters had come to a point where they could continue their life journeys from a more informed standpoint.  I felt as though I had helped them unburden themselves of all the things that had held them back, and  was releasing them to new adventures.

I am currently writing a novel called The Stone Dancers, set in North Wales.  A woman’s need to re-invent herself is challenged by a past she wanted to keep hidden.

A carrier bag rustled in her hand as she opened the door of the small house. Dark inside, musty. As she climbed the stairs, she heard people arguing in the rooms below.
At the top of two flights of stairs, a door at the end of a narrow landing. A small room smelling of damp. A bed. A chair. A table. She put the carrier bag down on the table and turned to the man lying on the narrow bed.
“Tom?”
Too still. Too silent. The baby, lying next to him, started to cry, and she picked him up and rocked him. With one hand, she reached out and gently touched the man’s bare chest. Cold. Still. Pale eyes stared without blinking at the stained ceiling. She took hold of his wrist and prayed for a pulse. Nothing. He was playing a game. Had to be. She had only gone to buy some milk. And he had been fine when she left. If she shook his shoulder, if she shouted loud enough, if the baby cried, if she cried…he would wake. Wouldn’t he?

Laura’s eyes snapped open. She tried to sit up, but a strong hand gently restrained her.
“Lie still for a moment,” a deep voice advised. “Take your time.”
She tried to remember where she was. Loss swam around her like a shadow. She was dimly aware of hands helping her to her feet, putting a blanket around her and guiding her to a chair. She heard a door close gently. Someone put a glass of water into her hands, and she sipped it as instructed. Gradually, she became aware of a man sitting in a chair opposite her.
Looking around her, Laura saw a massage table and a heap of blankets and cushions. And she remembered where she was. She was in another part of the room now, sitting by a tiled fireplace in a comfortable armchair. She realised suddenly that beneath the orange blanket which had been folded around her, she was only wearing her underwear. Pulling the blanket tightly around her chest and over her legs, she took her time carefully arranging the folds of the rough fabric until she was sure that she was properly covered. The man waited patiently, looking away slightly. When she was still he smiled.
“Are you warm enough?” he asked.
Laura nodded warily and put the glass of water down on a low table that stood next to her chair. The world was beginning to make sense again. His words made a kind of sense, although it was an effort to decipher their meaning, as though he was speaking a language she was only just beginning to learn. She had the strangest feeling that she had been on a journey.
She opened her mouth to speak and was alarmed when no sound came out.
“Take your time,” said the man. “Take a few deep breaths.”
She tried again. “What happened?”
“Well, that’s what we need to find out.”
“Where’s…” It was frustrating, trying to find words again, trying to remember how to speak. “Where’s the other man?” She was speaking slowly, forming each word carefully, as though she was drunk, but the man did not seem alarmed.
“Oh, I expect Steve’s gone to put the kettle on. He’ll be back in a minute. He seems to believe a cup of tea is the answer to most things.”
Laura’s mother had been much the same. It felt good to be back in a world where people made cups of tea. She remembered the women who had been part of her childhood landscape—the grandparents, aunts, neighbours. Women whose tea drinking and knitting had been the constant background against which she had been able to grow.
“You got him a bit worried,” continued the man. “One minute you’re lying still and the next you’re shaking and crying.”
Watching him, Laura remembered where she had seen him before. He had watched her through the window while she hesitated in the frosty garden. He sat very straight in his chair, long legs crossed at the ankle, hands resting on his knees. In his thirties, she guessed. Dressed in faded jeans and a white shirt. Dark hair, almost black, reaching to his shoulders. A hint of tiredness around eyes that watched her thoughtfully, not seeming worried about her examination of him and in no hurry to rush her. She felt her breathing slow and deepen and her senses sharpen.
“I’m sorry,” she said at last.
“Don’t apologise. These things happen. Is there someone I can call to pick you up? Your husband, perhaps?”
“No!” Too loud, Laura told herself, too shrill, too desperate. She took a deep breath. “I’m really sorry if I’m causing any problems. I’ll be fine in a moment.”
“Why don’t you tell me what you saw?” the man asked.
“Why?”
“Well, if nothing else, it’ll pass the time until Steve comes back with the tea.”
“It was a dream.”
“What sort of dream?”
“I don’t know.” She shrugged. “Just a dream. I must have fallen asleep. Don’t you ever fall asleep and dream?”
There was something about his quiet patience that irritated her as much as she found it comforting. Part of her wanted him to be as confused as she was. She stared at him, wanting to get a reaction. Something. Anything. Just a movement. She had never seen anyone who could sit so still. The child in her wanted to make him angry. As her awareness of her surroundings sharpened, she noticed how handsome he was, which annoyed her even more. She wasn’t going to play the helpless victim to a man she had never met before.

Karen Ankers lives in Anglesey, North Wales, where she draws inspiration for her writing from Wales’ mythic landscape and from the Celtic storytelling tradition. She started her writing career as a poet and has had poems published in various magazines and anthologies. Her first poetry collection, One Word At A Time, was published last year and she regularly reads at local spoken word events. She also writes one-act plays, in which she tries to give a voice to those usually ignored and unheard. These plays are published by Lazy Bee Scripts and have been performed in the UK, America, Australia and Malaysia. The Crossing Place is her first novel.