Anya will be awarding a $15 Amazon or B/N GC to a randomly drawn winner via rafflecopter during the tour. 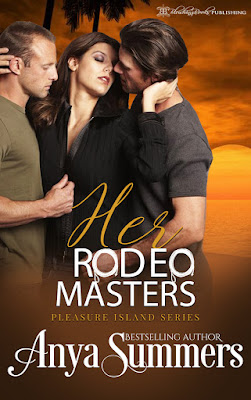 Ivy Phillips is on a mission. She’s an investigative reporter for the Pasadena Tribune, and is hoping to write the story of the century by infiltrating Pleasure Island claiming to be a submissive. Except, when she gets there, she inadvertently finds herself auctioned off for charity and now has two hunky cowboys who want to own her body and soul.

Dax Johnson and Nate Banks have been a rodeo team – and lovers – for years. But they’ve yearned to add a sweet submissive to their union. When they meet Ivy, Dax knows she is the one for them, and the duo set out on a seductive campaign to win Ivy’s affection.

But when the truth is revealed, will their newfound relationship survive? Or will the two cowboys ride off into the sunset without her?

Publisher’s Note: This is the ninth – and final – instalment of Anya Summers’ bestselling Pleasure Island series. While we recommend all the books, it can be enjoyed on its own.

Ignoring the roiling mass of coffee churning in her stomach, she approached her boss. Don gave her a ‘what now?’ scowl.

“Sir, let me do this and not the horoscopes. I really think there’s something here. There’s a club that has a private section,” Ivy explained.

“That’s not news, Ivy, that’s Hollywood spilling over up interstate 210. Most of the posh clubs within fifty miles of downtown Los Angeles have a VIP section,” Don said, shaking his head, his frustration with her palpable.

“Yes, but I know that this one is different. My instincts—”

Don gave her a patronizing glower. “Ivy, you’re a great writer, which is why I hired you in the first place, but investigative reporting is not the right fit for you. I’ve been in the news business longer than you’ve been alive and I know a thing or two. I need you to trust me on this and do the job I’ve hired you to do.”

She flinched. “Just give me this one chance. Let me investigate this, and if I’m wrong—”

“If you’re wrong, you go back to writing what I assign you, no more questions asked,” Don finished for her.

“We’ll see. You still have to do the horoscope pieces this week, along with the rest of your workload,” Don said, not giving her an inch of space.

“I understand. Thank you, sir,” she said and walked toward the conference door.

“Don’t thank me yet. Because if you truly fuck up and harm a business without sufficient proof, you won’t be writing anything—you’ll be unemployed,” Don threatened.

The spurt of confidence she’d felt deserted her as the realization sank in. She’d just bet her career on the off-chance that she had a story.

Ivy slunk back to her office, her knees shaking. She ignored the evil smirk from Stuart and the pitying glances from the rest. She could do this: she could be an investigative journalist, just like her father. Back in her workspace, she sat at her desk and stared at the letter from Dungeon Pleasures. There was no time like the present to shake up her life and dive in. Tonight would be the perfect night to begin her investigation. And, if fear slithered through her system at the thought there was a chance she could lose everything she’d worked for, she shelved it for later.

She didn’t have time to be a wimp. This was her ‘go big or go home’ moment.

Anya is a bestselling and award-winning author published in multiple fiction genres. She also writes urban fantasy and paranormal romance under the name Maggie Mae Gallagher. A total geek at her core, when she is not writing, she adores attending the latest comic con or spending time with her family. She currently lives in the Midwest with her two furry felines.