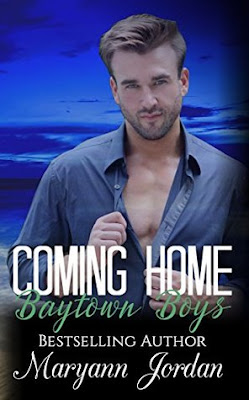 Military duty called them away to war zones, but after tours overseas, the group of friends found their way back home as men, seeking the peaceful little seaside town. Now, the band of brothers, together once more, work to provide a place for less fortunate veterans to call home.

Mitch Evans left his career as an FBI agent after his father retired as the Baytown Police Chief. Returning home to take up the mantle, he was glad to be back with his family and the Baytown boys. The bonus? Reuniting with his childhood friend and teenage crush.

Victoria Bradford came back to Baytown to run the Sea Glass Inn after her grandmother’s death. A simpler life was what she yearned for. When the new Police Chief showed up on her doorstep, her heart skipped a beat as old memories came rushing back.

When one of Tori’s guests died from poisoning, Mitch was determined to stay objective while solving the murder. Then the evidence pointed to Tori as being the intended victim and another attempt was made on her life.

Mitch, desperate to find the killer before he strikes at Tori again, calls upon the Baytown Boys to assist, as he vows to protect her.
****Due to scenes of an explicit sexual nature and language that some consider crude, please be warned - for 18+ only! If you do not like alphas with heart who fall instantly in love with strong female characters while dealing with real life issues...again be warned!!*****

There is not much to do in a small town when you are growing up, and most of the boys wanted out of the town, they wanted to see the world.
Mitch Evans is one of the boys that left the town, served in the Military and then became an FBI agent, after his Father the Chief of Police had to retire Mitch came back home to take the mantle that his Family held for ages.
Victoria Bradford is another who returned to Baytown to run the Sea Glass Inn after her grandmother’s death. Its a life she yearned for and when the new Chief of Police shows up her heart skips a beat and old memories return.
When one of Tori’s guests dies from poisoning, Mitch was determined to stay objective while solving the murder. As they grow closer and Mitch's and his team work starts to point that the poisoning was meant for her not for the guests.
Mitch is trying really hard to find out who is the killer to save the woman he loves, will he save her or will he loose her again.
Great story great characters.