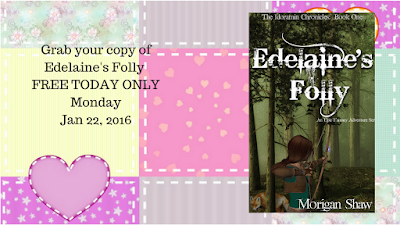 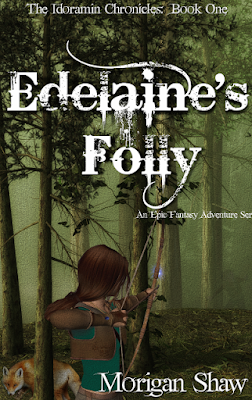 The long days of peace have ended... an old darkness has returned...

Cali Flynn’s life is over.

At least that’s how she sees it. Thrust into a destiny she doesn’t want, a family legacy she never knew, and forced to trust in an unknown strength she doesn’t understand.

An unseen threat, hidden and lost to legend for generations,emerges from the shadows. Now, Cali must accept this life she's charged with, learn her own strength, and forge a path forward. But how can she with the fifteenth-year winter approaching and dealing with the tragedy that came upon them like a thief in the night?

If Cali can’t find a way to bring everyone together and convince them of the looming danger, Edelaine, and all Idoramin, could be lost forever.

Characters that draw the reader in, believable and real. Lands both beautiful and treacherous. Races both familiar and unique. This is the world of Idoramin.

Sword and sorcery fantasy fans of works like John Flanagan’s Rangers Apprentice series, J.R.R. Tolkien’s Lord of the Rings trilogy, or George R.R. Martin’s Game of Thrones, Fire and Ice, will fall headlong into the world of Idoramin. A brilliant read for anyone middle-school age and up.

Tell us about Edelaine's Folly: Book One of the Idoramin Chronicles.

Originally, Edelaine’s Folly started out as a standalone book. There was another story I was working on, and the further into that story I wrote, the more I saw that there was a lot more these characters had to say. More than that, there was an entire history and backstory that was as good (if not better, if I’m being honest!) than what I was working on at the time… and that backstory became Edelaine’s Folly.

It brings readers into the world of Idoramin and let’s them see what happens when a world that has been at peace for ages is suddenly facing the reality that an ancient evil might still be in their world. They are struck by tragedy that starts an avalanche of events that none of them ever expected, or could have ever imagined being part of their lives. And how does a person react when their life is not only devastated by a tragedy, but then they are tasked with forgoing the life they had imagined for themselves to live out one that is now forced upon them.

What initially inspired you to write Edelaine's Folly: Book One of the Idoramin Chronicle?

My son - cliche maybe, but it is very true! When he was younger we used to tell each other this ongoing, epic tale, that we made up on the fly. It was a fun little tradition we had. Over time it started to take on a life of its own, and we wanted to bring as many others into the world of Idoramin as we could. We are both huge geeks, love playing MMORPG games, love anything fantasy, so this was just the next logical step.

Tell us little about the characters in Edelaine's Folly: Book One of the Idoramin Chronicles.

Cali is our main character. We get to meet her and take a glimpse at her life, a normal, ordinary life in a farming region of Idoramin known as Edelaine.  Like a lot of us at her age, she doesn’t really have a big plan for her life, but she knows what she likes to do, and sees herself following along in the footsteps of her family. She has some dear friends that help her along the way, while they are all dealing with their own grief and loss, and all of the other emotions that come along with a life-altering tragedy. In Cali’s case, she not only has to come to terms with the events that happened, but she also has to learn to live with a family secret, one that has been part of her family since time immemorial.

Oh wow, that’s actually a tough question!  There are two things that stand out for me. First, I had to give up a little bit of control over the story itself to Cali and her friends. I started this book with a very clear vision of what I thought was going to happen… but sometimes characters tend to take on a life of their own, and as a writer, I’ve learned to trust them when they speak up. ;)

The second part was I think probably what someone like Peter Jackson contended with when he was trying to make the decision between making two movies, or turning it into a trilogy. There is so much story that needs telling from Idoramin, that right now the series looks to be (at least) another five to six books.  In fact… little teaser - and an exclusive announcement right here on Two Crazy Ladies Love Romance… Book Two will be out quite soon!

Once Cali and the others took over the story-telling, the entire thing was my favorite! But there is one particular section that was extremely difficult in the telling. It was very emotional, yet very fast-paced, and I can only hope that it has even part of the emotional impact for a reader as it did on me as the writer.
What are your future project(s)?
The Idoramin Chronicles looks to be keeping me busy for the foreseeable future. Right now, Book Two will be available to readers very soon, and - my muses willing - I am planning on Books Three and Four this year as well. (Yes, I am already stocking up on coffee.)

What readers don’t know yet… and I’ll go ahead and make this another Two Crazy Ladies exclusive… there is an entirely different fantasy series that is in the pre-planning stages for after the Idoramin Chronicles are done… I don’t want to give too much away on that one though, but it has some really interesting twists.

Absolutely! Actually, for fans of the Idoramin Chronicles, I would love to invite all of them over to my website to sign up for behind-the-scenes access to dive deeper into the world of Idoramin. There are goodies available to folks in the Idoramin Chronicles Newsletter that aren’t found anywhere else…. There could even be some original artwork and other ‘neat-o’ kinda things in there!

Since I have set up a rather ambitious publishing schedule this year, I am opening up a few more spots in my beta readers and launch team.  For fans of Idoramin, they can apply to join the beta readers team and get access to review and help shape upcoming books BEFORE they are published.  And if anyone is interested in that, they can do that on my website as well, which can be found at:  http://www.moriganshaw.com/

Much is lost in history, especially so, when that history becomes mere legend over the eons. What is the urgency or importance of preserving a fae-tale used to scare children into their chores, I dare ask?

Yes, but what form would you have Time take in this mortal realm, young Cali? Time is a precious and precarious thing, it creeps along, there one moment and gone the next. See, of all the patrons of The Mother, Time is the one that can, and does, in its own way, directly affect everything in this world.

Morigan Shaw grew up in the foothills of the Appalachian Mountains in West Virginia, dreaming of one day becoming an author.

After a successful career in web development with multiple Fortune 500 companies, governmental agencies, and local non-profits across the U.S., she realized her dream, jumping headlong into writing and hasn’t looked back since.

She currently lives with her son and cats in West Virginia, where she continues to write, draw, paint, cook, and enjoy the outdoors.