Mating The Alpha
by Candace Ayers 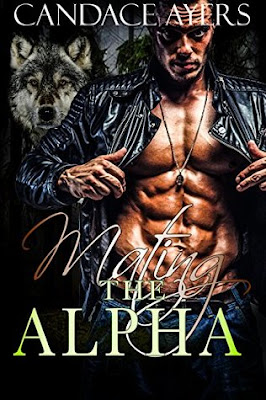 Dr. Lexi Green has seen strange things in the local ER, but this takes the cake. After eight gunshot wounds to the chest, this guy shouldn’t be alive much less giving her a wink on his way out the hospital doors. WTH?

As next in line for Alpha, making him the most powerful wolf on the East Coast, Shane has no time for women – especially a human. Not with his reign being violently contested by the anti-human shifters. So, why is it that he can’t resist the sexy ER doctor?

WARNING: THIS BOOK CONTAINS GRAPHIC SCENES OF A SEXUAL NATURE AND IS NOT INTENDED FOR READERS UNDER 18.

In her career as Dr. Lexi Green has come across many things and some that baffled her, but this one was definitely one for the books. A man has been wheeled into the ER with eight gun shot woods and a knife in his throat, and he winked at her, that should not have happened.
Shane is next in line for Alpha, that makes him the most powerful wolf on the east coast, but he has no time for woman specially a human one. But the attraction is there, but there are a few obstacles that line the path for them and their feelings will they overcome them?
A quirky quick read and a fun one too.