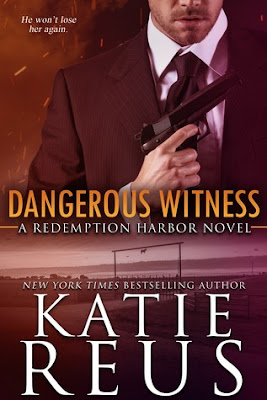 When the woman he loved walked out of his life, Brooks Alexander was certain she did so willingly—with the cool two-million his father had offered as incentive to walk away. So when he learns that Darcy didn’t take a dime of his father’s payoff, Brooks realizes he made an epic mistake. He’s determined to make things right and reclaim his woman. Except neither task is as easily accomplished as he first thought.

Now her life is in his hands…

Wedding planner Darcy is no stranger to disappointment when it comes to the men in her life. When Brooks accused her of taking his father’s bribe, she was devastated that he thought so little of her—and realized he never knew her at all. So she walked away with her pride intact and her heart broken. Now, months later, an overheard conversation puts Darcy in the crosshairs of a dangerous criminal with powerful connections. With nowhere else to turn, she has no choice but to put all her trust in Redemption Harbor Consulting—and its cofounder, the man who broke her heart.

Brooks Alexander made the biggest mistake in his life, he believed the woman he loved accepted a bribe for two million dollars to leave his life, after a while he realized his stupidity and now he is determined to reclaim her and make things right, but soon he realizes that this task its not the easiest thing to accomplish.

Now her life is in his hands…

Wedding planner Darcy is is used to disappointment when it comes to the men in her life. When Brooks accused her of taking his father’s bribe, she was hurt and devastated that he thought so little of her. But managed to walk away and salvage her Pride.

Now several moths later she comes in the cross hairs of a dangerous criminal with very powerful connections, and with no where to turn she has not choice but to put her trust in Redemption Harbor Consulting—and in Brooks the man who once broke her heart.

Will Brooks manage to keep her safe and gain her trust again, will she allow him back into her life,
to find out just read the book, its a great story, and wonderful characters.