The Bastard's Bargain
(The O'Malley's #6)
by Katee Robert 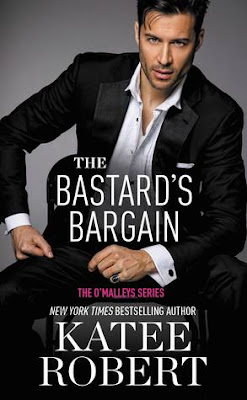 When Keira O’Malley was a child, she used to picture her perfect wedding. The flowers. The dress. Her husband. But nothing could have prepared her for saying “I do” to Dmitri Romanov—cold, domineering and always one step ahead of everyone else in the ever-shifting power plays of New York City. She agreed to his bargain to secure peace for her family, and she may want the bastard more than she’d ever admit, but she’ll be damned if she’ll make this marriage easy for him.

Dmitri knows better than to underestimate Keira for one second. Molten desire smolders between them, a dangerous addiction neither can resist. But his enemies are already on the move, and he needs every ounce of his legendary focus and control to keep them alive. Keira could just be his secret weapon—if she doesn’t bring him to his knees first.

Katee Robert left the best for last in The O’Malley Series in my opinion! I was fortunate enough to read two previous books in the O’Malley Series (The Wedding Pact book 2 Carrigan O’Malley/ James Halloran story & Forbidden Promise book 4 Sloan O’Malley/Jude MacNamara story) As in the first two books I read The Bastard’s Bargain had suspense, hot steamy sex, hot alpha males, and take no crap from those alpha males females except in the bedroom, well I should say Keira O’Malley was different than her sisters in that department she took no crap in that department too.

Dmitri Romanov had a score to settle with Aiden O’Malley, Keira’s brother, a wife and a sister that he “stolen” from him and what a way to pay him back but marrying his babysister Keira.

Keira O’Malley was addicted to drugs & alcohol, she hadn’t had a sober twenty-four hours since her beloved brother Devlin O’Malley was murdered. She has been drawn to Dmitri since the first time she saw him. When Dmitri offers her a “bargain” he doesn’t start war with her brother if she marries him she takes him up on his offer. But unknown to both of them is what to come a cosmic combustion between the two.

I recommend you pick up a copy of The Bastard’s Bargain and find out why this gal couldn’t put it down.