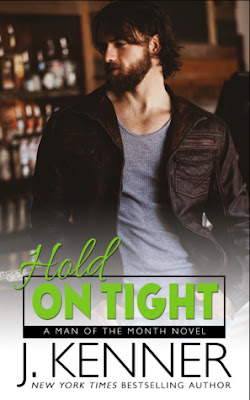 A hard body. A dangerous past.
Meet Mr. February.Reality-TV star and reformed bad boy Spencer Dean doesn’t trust women. Not after his fiancée, Brooke, left him at the altar five years ago, breaking his heart and hardening his soul.Now, Brooke is close to a deal for her own show that will launch with the remodel of a popular Austin bar. The problem? The network insists that Spencer step in as her partner. He’s tried to forget her—but he can’t deny that he still wants her. More than that, he wants to punish her. And so he agrees, but only on terms that are provocative, demanding, and wildly sensual. It’s the perfect set-up for extracting revenge. But he doesn’t expect to fall for Brooke all over again…Revenge never looked so hot.**Hold On Tight is part of a binge read series by New York Times, USA Today, Wall Street Journal, Publishers Weekly, and #1 International bestselling author of the million copy Stark series, J. Kenner. Each novel in the series is a STANDALONE romance with a guaranteed HEA!But even so, you won’t want to miss any in the series. Because then you can answer the question…Who’s Your Man of the Month? When a group of fiercely determined friends realize their beloved hang-out is in danger of closing, they take matters into their own hands to bring back customers lost to a competing bar. Fighting fire with a heat of their own, they double down with the broad shoulders, six-pack abs, and bare chests of dozens of hot, local guys who they cajole, prod, and coerce into auditioning for a Man of the Month calendar.But it’s not just the fate of the bar that’s at stake. Because as things heat up, each of the men meets his match in this sexy, flirty, and compelling binge-read romance series of twelve novels releasing every other week from New York Timesbestselling author J. Kenner. “With each novel featuring a favorite romance trope—beauty and the beast, billionaire bad boys, friends to lovers, second chance romance, secret baby, and more—this series hits the heart and soul of romance.” — New York Times bestselling author Carly PhillipsComplete Title List:Down On MeHold On TightNeed You NowStart Me UpGet It OnIn Your EyesTurn Me OnShake It UpAll Night LongIn Too DeepLight My FireWalk The LineAnd don’t miss Bar Bites: A Man of the Month Cookbook by J. Kenner and Suzanne M. Johnson, featuring recipes, slices of life, and all new scenes and short stories!

Revenge is never good, never was and never will be, thus said the book was not that bad, interesting plot and end.Spencer Dean is a Reality-TV star and reformed bad boy, and he does not trust woman at all. specially after his fiancee left him waiting at the alter 5 years ago.h Spencer Dean doesn’t trust women. Not after his fiancee.Brooke is close to a deal for her own show that will launch with the remodel of a popular Austin bar. There is only one tiny problem, the network wants Spencer to work with her, oh Lord is that going to work.?For years he tried to forget her, but the one thing he can't deny is that he still wants her, and he wants to punish her, so he gives in and agrees and the terms are well interesting to say the least.I received a free copy for my honest review!Review by Jara