2CLLR #WednesdaySpotlight w/Giveaway: The Governess Next Door by Nina Mason


The Governess Next Door
by Nina Mason 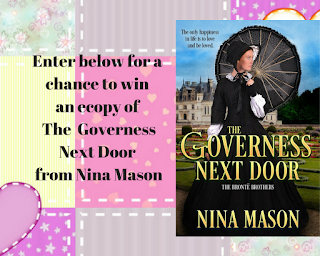 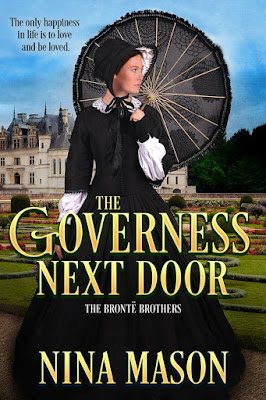 A decade ago, Raphael Brontë, a cousin to the Brontës of literary fame, sold his heart to a wealthy French Countess, whose patronage allowed him to pursue his dream of becoming an important painter. Now that she is dead, he fears he lacks the capacity to love—which is just as well, since he must forfeit the fortune she bequeathed him if ever he chooses to marry.
Prudence Middleton, a proper English governess, abandoned her dreams of finding happiness in marriage when her father’s desertion forced her to work for a living—to support herself as well as her mother and sister back home. Now, she is on her way to France to prepare a willful young woman for her debut—a task that seems as hopeless as ever escaping her lonely and degrading existence. Unless, of course, she meets a man who has money, along with all the other noble qualities she desires in a husband.
When the handsome, charming, and wealthy Count in a neighboring chateau takes an interest in her, she begins to believe her prayers have been answered—until she learns Lord Brontë has a secret He is not, says her ruthless coquette of a pupil, what he appears to be.
When forced to choose between her heart’s desire and her duty to her dependent relations, which will Prudence put first? Or will she find a way to have it all? 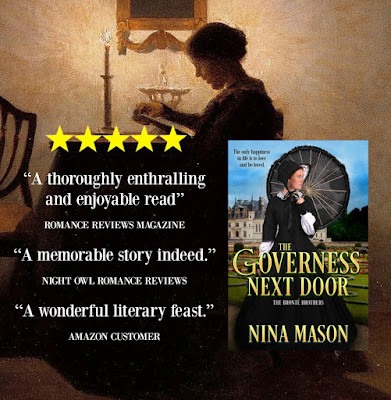 Tell us about The Governess Next Door.

The Governess Next Door is the first in a new romantic historical series titled The Bronte Brothers. The brothers featured in the four books are the fictitious cousins of the Bronte sisters of literary fame. The stories are set around 1850, at the height of the Age of Romanticism, and are inspired by the works of the Bronte sisters.
What initially inspired you to write The Governess Next Door?

My idea was to write books in the style of an inspired by the works of the Bronte Sisters. Governess, inspired by Jane Eyre by Charlotte Bronte and Agnes Grey by Anne Bronte, tells of the romance between an English painter living in France and the governess who comes to tutor the headstrong young woman in the chateau next door in the social graces in preparation for her debutante ball.


Tell us little about the characters in The Governess Next Door.

The hero is Raphael “Raphe” Bronte, a struggling English painter who has lived unhappily for the past ten years with his wealthy patroness. When the countess dies, she gives him lifetime residency in her chateau as long as he doesn’t marry.

The heroine is Prudence Middleton, who is forced to work as a governess to support her mother and sister after her father abandoned his family for his mistress. The only way she can escape her hateful life is to marry for money--but she also wants to marry for love.

The anti-heroine is Lady Angelique, the spoiled and selfish girl Prudence has been hired to improve. The anti-hero is Lucien, the nephew of Raphe’s dead patroness, who wants his aunt’s fortune for himself.

Making the story both true to Victorian times and accessible for modern readers. I do a tremendous amount of research for all my books and Governess was no exception.

Originally, I released the book under the title Jane Grey, and then re-released it with a new title, cover, and several revisions that tightened the story and brought the romance forward. One of the scenes I wrote for the new version is one of my favorites. In it, Raphe, who is giving Prudence and Angelique drawing lessons, poses privately for Prudence in the nude. In the scene, she struggles with her attraction to him while attempting to draw him.

I have two books coming out in the next few months. The first is The Captain of Her Fate, the first in yet another new series titled The Other Bennet Sisters. Captain is set in the Regency period and tells of the romance between a crippled former Navy Captain who distrusts women and a young woman desperate to marry anyone other than the odious cousin her abusive father has arranged for her to marry. The Captain of Her Fate will release on March 20 and is currently available for pre-order on Amazon.

The second book is the fourth and final installment in a paranormal/fantasy series titled Knights of the Tarot. The last book, titled Knight of Swords, will release on May 15. At present, I’m still writing it.

Prudence surveyed the group of paintings before her with awe. They were nothing short of brilliant, one and all. He’d revealed them to her, canvas by canvas, with one notable exception: his work in progress, which remained under a sheet on his easel.

As she wandered over to examine more closely the large canvas he’d propped atop the mantle shelf, Angelique’s hint whispered in her ear, threatening to wreck her happiness.

He’s not what he pretends to be.

Pushing the thought from her head, she examined the painting, which depicted a young woman in a purple dress. There were flowers at her feet—symbols no doubt, but representing what? The end of spring? The end of innocence? Perhaps the girl was about to get married and the flowers represented the maidenhood and family she was leaving behind. Only on closer inspection did Prudence notice the second figure—a man, hidden in the shadows, with his head bent over the woman’s left hand.

“What’s the story behind this one?”

Raphe came up behind her and looked over her shoulder. “I call it The Miller’s Daughter, after the poem I recited for you just now in the parlor.”

Prudence smiled. Her instincts had been correct, for the poem told of a young couple’s wedding. “Does the painting also have a deeper significance?”

“It does, you clever girl. It’s meant to represent how difficult it is to marry for love when so many pressures are put upon us by society and other people.”

His statement struck a dissonant chord within her. “Did you know Lord Deveraux has you in mind for Lady Angelique’s husband?”

Despite her great fear of the answer, she asked, “Is there any chance he’ll get his wish?”

Puzzled by his answer, she turned to face him. “What’s that supposed to mean?”

He walked to the window and looked out, hands clasped behind his back. After a painful few moments of silence, he said, “There’s something I haven’t told you…because…well, because I was afraid if you knew, you wouldn’t want me.”

Fear swelled within Prudence. It was the secret to which he referred. It had to be. Pulse racing, mouth dry, she said, “Well, don’t leave me dangling in the wind, Raphael. What is it you haven’t told me?”

After an unbearable silence, he said, “Fabienne and I were never married, she only told people we were for appearance’s sake. And after she died, I saw no reason to give up the charade.”

“And, therefore, I had no legal claim on her estate when she passed on. Hours before her death, she changed her will, leaving me life tenancy at Coeur Brisé and an income sufficient to support myself and the estate. But there was a condition attached to her bequest. Everything would go to Lucien if I ever took a wife.”

She turned away from him, hurt and angry. “And you pursued me, knowing this? And almost compromised me, discerning full well you could never offer me marriage? Oh, Raphe. How could you?”

“How could I not when I knew, almost from the moment we met, that you were the sort of woman I could fall in love with?”

“I could strike you,” she let escape like steam from a boiling kettle. “So help me God, I really could do violence to you right now.”

“Then do, if it would make you feel better. But please, hear me out. Because there are two paths still open to us—if you will only keep an open mind.”

Prudence, her mouth pinched, regarded him warily. “I will not be your mistress, if that is what you are thinking.”

He scrubbed a hand down his face. “I stand ready to confess that it is—and I do wish you’d listen. For one, there is not the same stigma attached to kept women here in France as there is in England. And for another, I could support you in style. Just think of it, Prudence. You could give up governessing and live like a countess—and there would still be plenty left to send back to England for your mother and sister. And, best of all, we could be together as man and wife in all but the eyes of the law.”

“And therein lies the problem,” she said. “While it may be true that mistresses are looked upon with more favor here in France, my family is in England. How could I ever face my mother and sister after being your whore?”

Fire flashed in his eyes. “Don’t say that. Never say that. You would not be my whore. You would be my wife…in everything but name.”

Prudence would not hear his arguments. Living in sin with him was absolutely out of the question, however much gilt he might apply to the indecent arrangement. “And when you grew tired of me? What then? I could not return to governessing…or thrust my disgrace upon my family. My only option, therefore, would be to go into another gentleman’s bed. To whore myself for my very survival. And who but you would have me for his mistress when I am plain and skinny and flat-chested?”

“You are beautiful to me, Prudence—and I would never grow tired of you, so you have nothing to fear in that regard.”

“And if you died, Raphe? What then? How would I support myself? What line of work would be open to me except to be a whore in some filthy brothel where the patrons didn’t give a fig who they rutted atop so long as she had a quim?”

“Stop this,” he cried, tearing at his face. “Please, you are breaking my heart.”

“No more than you have broken mine, you selfish bastard!”

Flinging herself at him, she began to beat upon him with her fists. She felt as though there was a cyclone whirling inside her, a spiraling tempest powerful enough to strip away what little remained of her hope and dignity. She would never escape governessing now. She would never know the love of a husband—nor have children of her own. She would die a dried-up old spinster whose spirit had been beaten down little by little until nothing was left but an empty shell.

Nina Mason is an incurable romantic who strives to write love stories that entertain and edify. A research fanatic, she goes to great lengths to ensure the locations and time periods in her books are accurately portrayed (and thanks the Powers That Be for the internet). Born and raised in Southern California, Ms. Mason lived in Oregon briefly before moving to Georgia, where she lives with her husband, daughter, two cats, and a Westie named Robert. When she isn’t writing, she makes historic dolls, fairy babies, and putters in her ever-expanding garden.