Two Crazy Ladies Love Romance #WednesdaySpotlight w/#Giveaway: A Wolf and the Trouble with Boxes by Lucy I Harrelson


A Wolf and the Trouble with Boxes
by Lucy I Harrelson 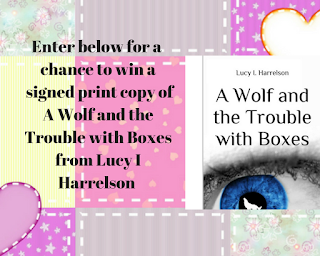 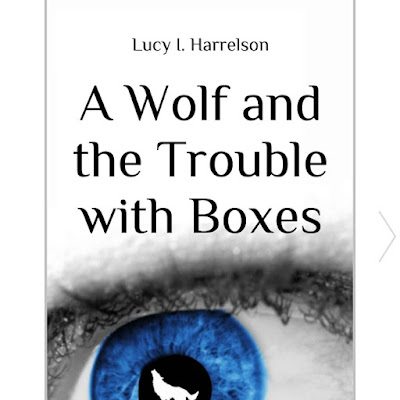 The only thing hotter than August in South Georgia is the heat between a sexy cowboy and a strong woman.
Throw in a curse and a little magic and the sparks start to fly! When rodeo star Ashton Lanyard walked into Katherine Lowell’s office, Kat thought it was just business as usual. She had no idea that she was about to be catapulted into a world of curses and magic that she never knew existed. Ashton was in town to get married, but that wasn’t all he was up to. During his time in the military, Ashton had stumbled across an ancient treasure trove filled to the brim with chests and boxes of treasures beyond belief. However, the trouble with boxes is that you never know what’s inside—until you open them. Now, Ashton is on the run from fate and he needs Kat, but Kat’s been burned before. Can Ashton gain Kat’s trust before it’s too late? More importantly, is Kat willing to face her own demons to save Ashton and a lost city?

Tell us about A Wolf and the Trouble with Boxes.

It’s technically a paranormal romance, but it centers around a strong female lead, Kat and how she gets roped into helping a former rodeo superstar with breaking a curse.  Lots of steamy romance, time travel, and paranormal elements make it a fun read.  However, it is a fast read!  So, it is perfect for a relaxing afternoon of reading.

What initially inspired you to write A Wolf and the Trouble with Boxes?

I love cowboys and all things that go bump in the night, but Westerns and paranormal seldom intersect.  I wanted to try and write something different than your traditional Western or paranormal novel.


Tell us little about the characters in A Wolf and the Trouble with Boxes.
Kat is a tough as nails business owner with a soft spot for cowboys and her horse Joe.  She has had trouble maintaining relationships in the past, and she is jaded.  When Ashton walks into her barn, she takes one look at his Wranglers and knows she is in trouble.

Ashton is former military, a rodeo superstar, and a very unwilling werewolf.  Did I mention that he looks great in Wranglers?  He needs Kat to help him break his curse so he can go back to his normal, everyday life.

I have two kids and run a livestock auction with my hubby.  We were also in the process of building a cabin (just the two of us), so, finding time to write was the absolute biggest challenge.

Kat and Ashton get pulled into an ancient city that has been trapped in a time bubble for centuries.  I spent a lot of time researching ancient Persian marketplaces and learned so much while writing those scenes!

I am currently working on a series called The Auctioneer’s Wife that follows the adventures of a spunky small town girl who always gets caught up in the troublesome lives of her neighbors.  From fighting the Mob with the local Dirt Road Mafia to infiltrating a local money laundering scheme, Becki ends up over her head quite often.


Is there anything else you would like to tell the readers about this book/series?

“Why not?”  I needed answers.
“I love you.”
And for the second time, I punched him.  I pictured my fist going right through his face.  Aston landed on his butt and skidded across the floor.  Rather than shift and eat me as I feared was about to happen, he started laughing.  He roared with laughter.
“Dang girl.  That was not the reaction I was expecting.  Do you always go around punching guys who proclaim their love to you?  No wonder you’re single.”
I turned my back and reached into the desk drawer for my gun.  I was going to shoot him.  I’d never met someone who made me so angry before.
“It’s not there,” Ashton calmly mentioned.
“What?  What do you mean it’s not there?”  Had he stolen that as well?
Ashton smiled.  “I figured you might react badly, so I asked Jada to put that gun in the safe.”
“Jada knows?”   I couldn’t believe it!
“Not all of it.  I just told her I wanted to propose to you, and she suggested I move the gun.”
I just stared at him.
“Easy there Annie Oakley.  I didn’t tell her what kind of proposal.  But, now that we’re on the subject, here’s my idea.”
Ten hours later, I was on a red eye flight to the United Arab Emirates with a snoring Ashton reclining next to me in first class.  I may love horses, but I’ve always been a dog person, too.

A serial entrepreneur, Lucy I. Harrelson recently published her debut novel A Wolf and the Trouble with Boxes (June 2017). After completing her MBA and a short foray into corporate America, Lucy realized that she preferred to stay close to her roots and currently co-owns and operates a livestock auction in Dublin, Georgia, with her husband Daniel, as well as their auctioneer training facility,  Southeastern Academy of Auctioneering.  Lucy explains how she made the decision to become an author in her latest publication, "Not Everyone's Cup of Tea: Learning to Redefine Success on Your Terms."  This year, she plans to release the first in her "Auctioneer's Wife" series that follows spunky small town girl Becki and her crazy adventures as an accidental private investigator. In addition to writing, Lucy is an avid horse enthusiast and lives on a farm in a cabin she built with her husband—just the two of them—with their two daughters, Ava and Georgia.