Death On A Yacht
by Carolyn R. Bradley 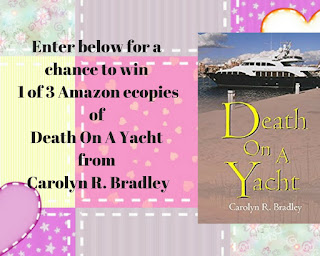 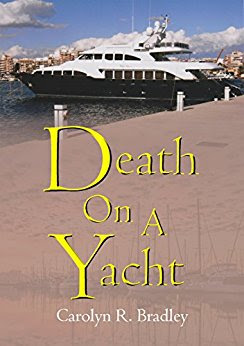 The year is 1998. Sir George Arlington, a despicable and ruthless businessman, who has spent most of his life plotting and scheming against others, is now the target for retribution. He has no idea of the web of intrigue growing around him.

An Italian Contessa, a retired Captain of the Royal Navy, gangsters from the East End of London and those with dark secrets, brought together with four young friends from very different backgrounds, who each have their own agenda, find themselves cruising with Sir George, on a luxury yacht in the Mediterranean. Plots and schemes abound, a death occurs and more confusion is added by a pompous Spanish police officer who resents the inevitable intervention of the British authorities.

What initially inspired you to write Death on a Yacht?

This book started life as a ‘Murder/Mystery radio style play’ and was performed by an amateur group. Everybody had a lot of fun with the characters and plot so it seemed a good idea to expand the story, produce some background information for the individuals and create a classic ’Whodunnit’ book.

Tell us little about the characters in Death on a Yacht.

The main character is one Sir George Arlington. A hard-nosed businessman who cares for nobody but himself; his goal in life is power and money and he is not concerned with the morality of how he acquires this or the number of enemies he makes. He is ably assisted by his even more ruthless accountant. The other characters comprise an assortment of people from very different backgrounds, who during the course of their lives, meet Sir George; they range from an Italian Contessa to criminals from the East End of London and nearly all end up with a reason to want him dead. The only person who really cares for him is his long suffering daughter.

What was your favourite chapter (or part) to write and why?

I think it was Chapter 19 - The Event. This was when all the possibilities and schemes came together leaving the reader to decide what happens next. I enjoyed the challenge of including all the characters from the Yacht in some way or another. I also enjoyed the ending.

I enjoy writing this type of novel; this is my second published ‘Murder/Mystery’. I have completed in draft form, two further books. I plan to start work very soon on the editing process for the third book which has a very diverse mix of characters and takes place in a trendy shopping Arcade in London.

I always try to include an element of humour into what can be perceived as a dark subject. Though all characters are entirely fictional, I strive to I construct the backgrounds and personalities by basing descriptions on a mixture of my own observations through life. It is therefore, quite possible to include the ridiculous and amusing as well as the downright wicked in a book such as this.


Another killing, another pigeon for plucking. As the tortuous process continued, George Arlington glanced idly around the boardroom. He admired the elegant decor for the umpteenth time. He prided himself on the original paintings hanging on the wall, all adding to the scene of opulence. Not that George knew the first thing about Art; they were just there for him to gloat over and be reminded every time that he looked at them, that they were a sign of his success.

He was well aware of the darting glances in his direction but he was studiously avoiding eye contact with the elderly man, one Thomas Danton, who was sitting opposite. The crushed individual was forced to return his gaze to the left, into the steely eyes of George’s cold-hearted accountant; the man who usually did the dirty work. This man was even more ruthless than George but was paid handsomely to be so. George knew who to pay and who to cheat!

‘But, but,’ the old man was stuttering, with the pen still in his hand, ‘you agreed to my son staying to run the company and  you promised that he should remain on the Board.’

‘I regret,’ continued the voice in  tones of pure granite, as the accountant collected the signed contract and signalled to the minions waiting to countersign as witnesses, ‘that will not be possible. Company policy dictates that we buy up competition, incorporate some of the skilled workers into our existing organisations and asset strip the rest. The company we have just purchased from you will be closed.’

The poor man paled. He saw forty years of hard work disappearing before his eyes. He had made the classic mistake of borrowing a lot of money to expand his business, his action based on his expectation of business growth when some unusually large orders had been received, and then of being unable to sustain the amount of sales needed in order to service the debt he had accrued. Vultures like George were always waiting for situations like this.  And yet, the old man had thought, that he had at least saved something for his son. Surely that had been in the agreement? He hadn’t dreamed it, had he?

‘Close the business!’  He gasped as he slumped in his chair and his skin took on a grey pallor.

‘But I understood that my son would have......’ His voice tailed off as the person opposite was shaking his head. George stood up.  He didn’t offer his hand, just smiled.

‘Nice doing business with you.’

‘Curse you,’ the broken man shouted, ‘you will be the death of me.’ Geo  rge’s indifference was patent.

‘My God,’ the old man continued in a tragic voice, ‘if there is any justice in this world, I hope someday it finds you. You are a monster, Sir. You have finished me and ruined my family.’

A week later George read in the paper that a man named Thomas Danton had committed suicide.  He shrugged his shoulders. Not my concern, he thought as he turned to the financial pages. It did not occur to him for one moment that in his outburst in the boardroom, the old man may have prophesied the future. George had no idea of what was to come.

Carolyn Bradley (now writing as Carolyn R Bradley), is retired. She spent most of her working life as a Primary School Teacher in Croydon, Surrey and is now determined to continue her long put off writing career.
When a busy teacher, most of her work was in the form of short stories or plays both for adults and children but she hopes to now continue to produce more novels. Crime stories that keep you guessing are her forté.
Her hobbies include Genealogy and singing Jazz and being a member of the local Seahaven writers' group.