Fur Ever Yours
(Black Paw Pack #1)
by Melanie James 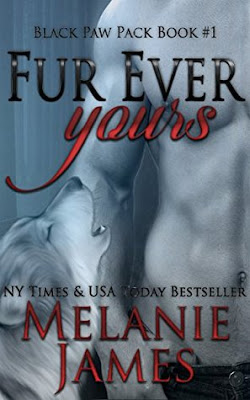 The legends and sagas of the Norse tell tales of mystic warriors, the Berserkers. Heroes with hearts so fierce, loyal and courageous the Gods endowed them with a supernatural gift—the spirit of the wolf. As the time of the Gods faded into the shadows of yesterday, the wolf warriors held fast to their old ways, becoming outlaws in their ancestral lands.
In a new age, in a new land, the packs rebuilt their lives faithful to their sacred ways. In the pack of Black Paw, one man stands above all others, Rafe Erikson. His unquestioned authority and skill have fulfilled all but one part of his destiny, to find his mate. What happens when he learns that his destined mate is bound to the twisted leader of a rival pack?
In the saga of Black Paw, there can be only one choice:
To follow your destiny at any cost.

Two packs, Black Paw. One as good as it could be, with an Alpha that cared for those in his pack and treated everyone as they should be with respect and love.
The other pack Twisted Tail, still a pack but one ruled by fear, intimidation and hatred, its Alpha rotten to the core not caring for those he was supposed to take care of.
Rafe Erikson a descended of the Norse Berserkers, a man with honor who led his pack well, Mina his fated mate manged to escape her pack and found her mate and the help she needed to get away from the old pack.
With the love she found, she also found that the old Alpha would not stop, will she and Rafe be able to stop what is to come, will their love and their pack survive. Wonderful story and great characters.