This post is part of a virtual book tour organized by Goddess Fish Promotions. Deborah is giving away a $10 Amazon/BN GC to a randomly drawn winner via Rafflecopter. Click on the tour banner to see the other stops on the tour. 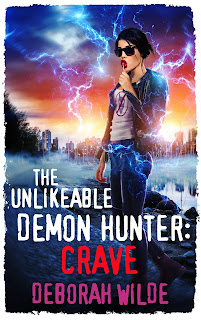 What doesn’t kill you...
seriously messes with your love life.
Nava is happily settling into her new relationship and life is all giddy joy and stolen kisses.


Except when it’s assassins. Talk about a mood killer.


She and Rohan are tracking the unlikely partnership between the Brotherhood and a witch who can bind demons, but every new piece of the puzzle is leaving them with more questions than answers.


And someone doesn’t appreciate them getting close to the truth.


On top of that, a demon known only as Candyman has unleashed a drug that’s harming users in extremely disturbing ways.

After a friend of Nava’s is hurt, she vows to take this demon down. But will life as she knows it survive this mission, or will this be the one time she should have looked before she leapt?

Happily-ever-after: barring death, she’s got a real shot at it.

Rohan parked, cut the engine, and turned to me, his eyes hot. “Know what else I don’t like?”

I licked my lips, remembered that wasn’t an answer and shook my head.

“Making me sit through dinner, watching you in that dress. Cruel.”

“You’ve been copping feels all the way home.

I snickered, but when he slammed his precious car’s door in his haste to get me inside, I may have set a new record for speed-walking in heels.

We barely made it into his bedroom before, mouth on mine, he pressed me back against the wall. His teeth dragged over my lower lip before his tongue slipped inside. He trailed his magic finger blades over my shoulder and bare back, just enough to leave faint marks that I’d shiver staring at in the bathroom mirror later.

Sliding my hand under his shirt, I skimmed my fingers along the ridges of his sculpted abs. He retracted his blades and I broke the kiss to draw his fingers into my mouth, my tongue swirling around each one in turn. Pinching his nipples with my other hand, I rubbed my bare thigh up his leg. His sigh rumbled over me.

A furious ache built to a throbbing pulse inside me.

Rohan sucked on my neck and I tilted my head to give him better access to the sensitive skin. He caressed my cheek with the back of his hand, pinning me with this filthy eye-fuck that made my stomach flutter. “Wrap your legs around me.” 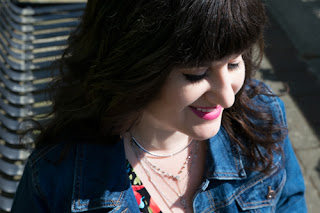 A global wanderer, hopeless romantic, and total cynic with a broken edit button, Deborah writes urban fantasy to satisfy her love of smexy romances and tales of chicks who kick ass. This award-winning author is all about the happily-ever-after, with a huge dose of hilarity along the way. “It takes a bad girl to fight evil. Go Wilde.”

NOTE: This title is discounted for up to 60% until midnight February 26 and the entire series is on sale until then as well.