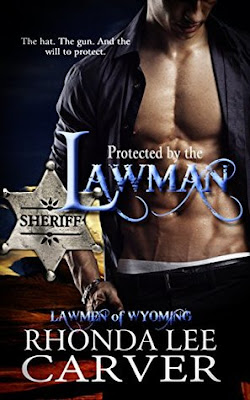 The hat. The gun. And the will to protect.

Showing up to investigate a double homicide, Sheriff Phoenix Cade almost comes out of his boots when he sees the blonde--the only witness to the crime--covered in blood. He'd danced with her a few nights before and had every intention of getting her number until she threw up all over his shoes. Hell, his shoes would wash…

Ria Portman has spent the better part of six years convincing her family and friends that she could take care of herself. The accident took her sight, but it didn’t take her independence. There were a lot of things she’d learned over the years, especially regarding men. They said they could handle her disability, but truth was, they lied. When her assistant and client are murdered in her studio she will have to rely on one man—the one man who makes her want to trust again.

Phoenix is over his ex, but since he caught her cheating he’s compared relationships to playing with fire. It’s only a matter of time before a man gets burnt. Yet, Ria is different. She’s beautiful, smart, challenging, and doesn’t need him…even when she does. He should keep his head on straight because the killers want her dead and it’s his job to keep her safe. However, he’s realizing, a man in love becomes a giant. He’ll protect Ria with a force unlike any that has ever been seen before.

Ria Portman never thought she would hear from Phoenix Cade after the night they shared a couple of dances and embarrassed herself after but after witnessing a double homicide of her assistant and a client who would show up to investigate but none other than Sheriff Phoenix Cade.

Phoenix Cade thought he would never see the woman who intrigued him that night at his friends bar until he walked into her house and found her the witness to a double homicide from that moment he promised himself he would protect her from the killer.

Protected by the Lawman was fast paced, romantic suspense that kept me turning the page. Ria is my favorite kind of heroine she was independent didn’t use her blindness as disability or for pity she was self reliant and smart. Phoenix was a protector but also understood Ria wanted to be self reliant. I really enjoyed watching their relationship develop, they each had been burnt in a previous relationship and didn’t jump right in. An oh Phoenix stole my heart in one scene I know it took a lot from him to do it but he was a gentleman.

If you are looking for a awesome old fashion romance with some suspense I recommend you pick up a copy of Protected by the Lawman, your favorite beverage and a nice comfy chair because you will not be able to put it down.