Realm of the Dragon
(Soul Mate Tree #1)
by Cici Cordelia 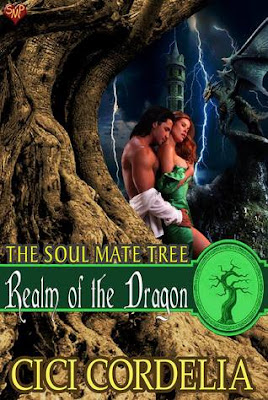 An ancient legend spanning eras, continents, and worlds. To some, it’s nothing more than a dream. To others, a pretty fairy tale handed down through the generations.

For those in critical need of their own happy ending, a gift.

For sheltered Lily Kiers, it’s all too real. Her escape from danger, straight into the arms of her destiny.

Thrust into a realm made of fantasy and unbridled passion, Lily faces violent resentment and jealousy from extremely powerful enemies. Amidst fierce creatures whose very existence defy all common sense, Lily pieces together a past she could never have imagined.

Claimed by Kord, Prince of Battle Draconian, their love will not be denied, even as malevolent forces plot to rip them apart.