Wendy will be awarding a $15 Amazon or B/N GC to a randomly drawn winner via rafflecopter during the tour.. Please visit GoddessFish.com to follow the tour, remember the more you comment better your chances on winning. 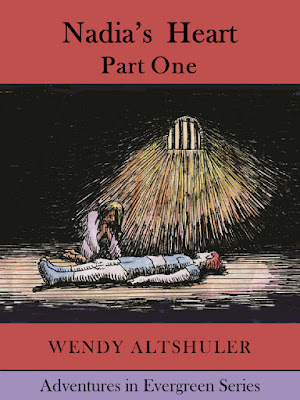 When an amnesiac girl who thinks she has been born without a heart utters a prayer, she is met by a mysterious angelic stranger from her forgotten past. Together they embark on a journey to recover her removed heart, but enter into battle with an Evil Voice on a rampage to remove the hearts of an entire generation of children - and replace them with stones.


Nadia awoke with a start.  She was sitting up in her bed, feeling the cold move through her white night clothes. She breathed in, hearing only the sound of her breath like the wind.   It must have been midnight.   The window had been opened, the shutter shifted slightly in the wind, and now she could see him, standing by the window, waiting for her.

He was dressed in silvery metal which covered his torso, upper arms and thighs.    His hair shone the lightest wavy brown, and his skin was powder white.  Underneath, he wore linen of deep magenta, and though he had not moved, she thought that he beckoned her with his thoughts.

He had.  She heard a voice, but it was more like an echo in her mind.

When she looked at his eyes for an explanation, she turned away quickly, for they glowed white and strange like the moon.  Like searchlights, they knew her, spoke to her, and waited for her to rise.  She felt suddenly challenged, as if her prayer had been answered.


Who was he?  Nadia peeked over the bed, staring at his feet, which were encased in silver boots with tiny wheels.  He hovered over the floor, and now he held his white hand out to her.   She hid behind her hair, which had come undone from all its braids, afraid to take his hand.

She reached out her hand, fascinated, to touch the plate of his back.   And before knowing it, they were outside, in the cool night air, hovering over her open window, shutter in view, then moving, rising above the cabin and through the night air.   She felt her fingertips attached to the metal like a magnet.  It was charged, cold and hot at the same time, but it did not hurt her.   She saw her bare feet dangling below, the ruffle of her night pants around her calves, and the man’s wheels under his feet which turned swiftly and created an almost inaudible whirling sound of movement.  His hair blew slightly in the wind while Nadia pulled hers close around her.

It was hard to tell if the green grass and glints of the town were lit by the moon or by the man’s eyes, so bright was the radiance coming from his gaze.   She felt light, suddenly ethereal and free.

The night sky was black, littered with tiny gleams of stars so numerous that they did not look real.  They seemed close, touchable, but then far away when they blinked in places one would not expect them to.  They traveled past the town, further and higher in the air, further than Nadia had ever traveled.   She did not know the expanse of the world and where they were going, and for a moment, was afraid. Georgeonus turned his head, as if he had heard her thoughts, as if reading her mind.  Perhaps her prayer had been granted.

She didn’t know where she was going, but she knew she could not turn back.

Wendy Altshuler is a writer-producer who explores myth in new media. She writes fantasy novels and creates works in stop motion animation. Her credits include award-winning screenwriting and WGA-accredited representation. With a degree in psychology and a Master of Arts from Columbia University, Altshuler documented the work of international choreographers and wrote and produced regional programming. Her short plays have been performed at Boston Playwrights' Theatre, at regional schools and most recently, Puppet Showplace Theatre. Altshuler's young adult book series has been hailed as "emotionally moving, uplifting and wholesome," and "spirited and haunting. . .with much symbolism and beauty."