Virtual Tour w/Giveaway: To Entice an Earl by Naomi Boom

To Entice an Earl
by Naomi Boom
GENRE: Regency Romance

Naomi Boom will be awarding a $10 Amazon/BN GC to a
randomly drawn winner via rafflecopter during the tour.
Please visit GoddessFish.com to follow the tour,
remember the more you comment better your chances on winning. 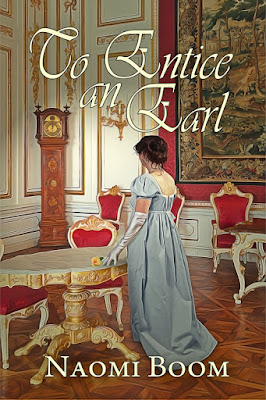 Miss Alexandra Farris lost her heart to her older brother's friend, Lord Maxon Collins, long, long ago. Despite her girlhood attempts to win him, he never noticed her. Now that her first season is underway, she understands why. He prefers willowy blondes, not curvaceous maidens with darker coloring like herself. Rather than wallow in self-pity, she forgets love and focuses on something more attainable—an advantageous match.

Lord Collins is plagued by an uncomfortable feeling whenever he goes near Miss Farris. One of annoyance. And yet, he can’t seem to stop thinking of her, touching her, kissing her...He must act in her brother’s stead, which means he has to approve her suitor and ensure her safety. Unfortunately, he can’t seem to find a worthy gentleman.

Wedding her off should be a simple task, but not if he can’t let her go.

She inhaled and stepped up to him. He was so tall, at least five inches taller than her, yet she would not allow him to intimidate her, not this gentleman she used to pester as a little girl. She peered up at him and planted her fists on her hips. “You cannot possibly imagine I would listen to you, can you?”

His eyes narrowed, and he straightened from his position against the wall which brought him that much closer to her. “I don’t only imagine. I know you will listen to me. You have no other options.”

Their gazes locked, and everything around Alexa faded away, except for the brilliant blue eyes which held her riveted in place. She brought her palm to her
chest to make sure her heart still beat.

It did, just barely.

She finally broke away and whispered, “I have not given him a response yet.”

His responding smile lacked warmth, and he appeared to gloat as he said, “Excellent. I never have liked Lord Edwin and cannot fathom why you do.”

“I happen to be very much in love with him.” She colored. She had just told Lord Collins she loved Lord Edwin. Where was her fan when she needed it most? Next to Miss Cannis where she had forgotten it. And now, she had to endure a most frustrating conversation where she admitted a falsehood. Not a simple falsehood, either. One which competed with the largest untruths of her life.

Her rushed denial teetered on her lips as a stronger gust of wind tore through her hair, causing several more strands to dislodge. She muttered a curse and reached
up to repair the damage the wind had made.

His large, warm hand shot out and stopped her. The humid night air could not compare to the warmth of his hand on hers, nor could it compete with the spasmodic tingles breaking out throughout her body.

She darted a hesitant glance his way where he quickly masked a warm look and took a step away from her. “Leave your hair.”

She swayed from the loss of his touch and the lack of warmth in his tone.

“Are you quite all right?” he asked with a sneer, as if to erase all touches of warmth with harshness. It hadn’t worked, though. She knew better.

Whatever strange demon had overtaken him tonight was not normal and was, quite frankly, vexing to deal with. “I see you can choose to employ good manners when you wish.”

His countenance darkened and he lifted a brow. “You evidently are just fine.”

Q & A with Naomi Boom

For some weird reason, the characters didn’t want to come alive for me which resulted in an inability to write the ending. I wound up getting so frustrated that finally, one day, I had enough. I spent a weekend chopping out unnecessary fluff and working on my character development, and then I finally could write the ending.

I love the heroine. She is nice but still has gumption, so she was enjoyable to write. I don’t think I could ever write a lead role that isn’t flawed, but her flaws made her more realistic and likeable.

Some of the dumbest things inspire me. Just looking at a piece of cameo jewelry makes me want to write. Seeing fashion plates from the Victoria Era. Reading a book. Of course, life can’t be that simple so sometimes I force myself to work, but more often the little things prompt my imagination.

Annie Burrows. She has a novel, Never Trust a Rake, that I have read so many times. Plenty of other authors influence me, but that one particular novel always makes my heart stutter. And now, I just discovered that there’s a Harlequin comic version of the novel. Guess what I need to read?

I am just emerging from a stint in the dreaded world of writer’s block. My problem is I had too much upheaval from moving twice and couldn’t concentrate. I tried forcing myself to write but just ended up re-reading stuff I already wrote. So, my only tip is to say don’t give up. Take a break, re-focus, and it will come. Eventually.

Naomi Boom never expected to love writing. Her inspiration struck while searching for the perfect historical romance novel to read. Nothing sounded appealing, so she decided to write her own. That one novel has morphed into a series, and hopefully many, many more.

She resides in her home state of South Dakota with her husband and toddler. Her dream is to someday find an acreage where she can raise chickens and, naturally, continue her writing.