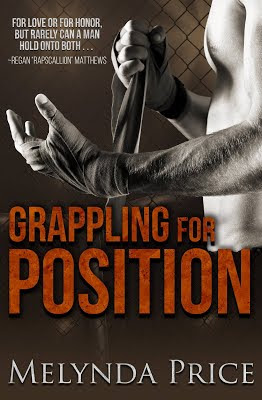 This battle of wills is about to go below the belt…

Willow Scott is sweet, innocent, and untouchable. She’s the epitome of everything MMA fighter Regan “Rapscallion” Matthews has always wanted but will never have. She deserves more than a scrapper from the wrong side of the tracks—the Scott’s charity case.

Unfortunately, Regan’s best friend’s little sister is all grown up and she’s tired of playing by the rules. With a shot at the Welterweight title finally within his grasp, Willow is a distraction Regan can’t afford. But this willful woman is determined to make him tap-out.

Willow has loved Regan since she was in pigtails and braces. She’s all but given up hope of her brother’s friend returning her affection, but she never stopped praying he would see her as more than Kyle’s annoying little sister. If Willow has her way, that’s about to change. Regan must decide if he’s willing to lose his best friend and the Welterweight title for a woman he doesn’t deserve but cannot live without.

When they were finally alone—well, as alone as they could be standing in a hall with students racing from one class to the next—Regan turned his full attention to Willow and felt something inside his chest cramp. “I miss you.” The words tumbled from his mouth before he could bite them back.
Her eyes softened enough to give him a shred of hope she wasn’t completely lost to him. Then she said, “I know how you feel, but it changes nothing.” The resignation in her voice sent his pulse hammering inside his chest. This wasn’t the Willow he knew. This woman was cold, reserved, and resigned to hold on to this wall separating them. “I can’t get over you if we’re always in each others space.”
Get over me? What the fuck? Frustration surged inside him, along with a healthy dose of panic, snapping the frayed ends of his self-control.
“Goddammit, Willow!” He slammed his palms against the wall on both sides of her head, caging her inside his guard. The bang echoed down the hall. She flinched but did not cower, holding his stare with that stubborn determination he so admired—when it wasn’t being used against him, that was.
Desperation clawed at his gut, anger making him reckless. “You need to hear me say it? Is that it?” he barked. “Will that make you happy? Knowing that I’m suffering just as much as you? Fine then, I’ll say it. I love you, Willow.”
She gasped—a sharp catch of breath. Her eyes widened with shock. “Why?”
His brow arched in question. Why? Seriously? This was the reaction he got when he finally told the woman he loved her? Definitely not the response he’d been expecting. But then again, when did Willow ever behave the way he thought she would?
“Why, after all this time, when I’ve finally started to accept that we’re never going to be together, do you suddenly decide you want me?”
She didn’t get it. Did she really not know? “Willow, I’ve always wanted you. It’s just taken me this long to realize I can’t live without you.” What the hell… In for a penny, in for a pound, right? “I don’t know when it happened, but it feels like forever. You’ve always been a part of my life, and I don’t want to lose you now—not over this. But the thought of betraying Kyle kills me. There isn’t much that makes me a good man. If I give up my integrity, what will I have left?”
“You’ll have me,” she pointed out, looking frustrated.
Fuck, she was killing him. He captured her face with his hands, eyes imploring her to understand. “But at what cost, Willow? How can you respect me when I can’t respect myself?”
Her brows tightened, that infamous temper flaring. “So, that’s it? You tell me you’re in love with me, but it changes nothing?”
He didn’t know what he was saying. This wasn’t how this conversation was supposed to go.
They stared at each other in a wordless standoff. Finally, she exhaled a breath he didn’t know she’d been holding and shook her head. “You’re a stubborn man, Regan Matthews, and a fool.”
He could have told her that. Wasn’t any news to him.
“You’re lucky I love you”—an unmistakable note of warning tinged her voice, putting him on notice—“and that I happen to be just as stubborn as you are. I’m not giving up on us, Regan, not without a fight.”
But hadn’t she done that already? Given up on them? It had sure as hell felt like it when she was avoiding him last week and “trying to get over him.” Unless she was calling his bluff. In which case, it totally worked. He’d folded like a house of cards.
Willow stepped closer. Her heat radiated against his chest as her light lavender scent coiled around him, filling his senses, lulling his defenses, and firing up his lust. His hands dropped to her hips—to keep her at bay or to pull her closer he wasn’t sure. She rose to her tiptoes, bringing her lips so temptingly close he could feel her breath brushing against his face. He
froze, waiting for her to close the distance, to take the decision out of his hands because, holy hell, the guilt weighing down on him right now was almost as strong as the lust rocketing through his veins.


What would she taste like? What would it feel like to have her mouth against his? Hot and untethered or sweet and ardent? The one time he’d felt the soft fullness of those lips she’d been sixteen and probably somewhat hammered. Her kiss then had been shy and unpracticed against his neck, but still so fucking hot. It had taken every bit of his strength to push her away that night, and he wasn’t sure he possessed the will to do it again.
He’d never been brave enough to take her into his arms and comfort her again. Hell, the memory was so close to the surface, the feeling of her sweet body pressed up against his. His reaction had been swift and most unwelcome, yet undeniable all the same. It hadn’t been the first time he’d thought of her in a less-than-platonic way, but it had been the first time his body had rebelled against the “Do Not Touch” order he’d given it.
Hesitation hovered between them another few seconds, tension ratcheting up the need to kiss her, to taste her. But she didn’t do it—didn’t bring her mouth into contact with his. Instead, her whispered words kissed his parted lips. “The gloves are coming off, Matthews, and I’m not quitting. Not until one of us taps.”
Oh, fuck me . . .
“Game on.”

Melynda Price a two-time RONE finalist, a USA Today, National Readers’ Choice, and New England Readers’ Choice Award-Winning finalist for her Against the Cage series. A multi-published author of contemporary and paranormal romance, what Price enjoys most about writing is the chance to make her readers fall in love, over and over again. She cites the greatest challenge of writing is making the unbelievable believable, while taking her characters to the limit with stories full of passion and unique twists and turns. Salting stories with undertones of history whenever possible, Price adds immeasurable depth to amazingly well-crafted books. She currently lives in Northern Minnesota with her husband and two children where she has plenty of snow-filled days to curl up in front of the fireplace with her Chihuahua and a hot cup of coffee to write.