Enter below for a chance to win a ebook of Cherry Tune-Up
from Adriana Kraft! 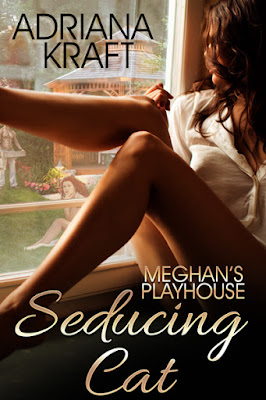 Level headed English Professor Caitlin Shanahan has finally earned tenure and purchased the century-old two-story house of her dreams in the college town of Burntside, Wisconsin—at thirty-four, she'd better face facts: her future is teaching college and writing plays, not falling in love. So why is she so drawn to foxy little hometown actress Meghan Keenan, who's rented her upstairs apartment, or worse, to the girl's gorgeous hunk of a lover Kurt Davis, a carpenter who's never even been to college?

Twenty-year-old Meg has a plan. First she'll seduce the reluctant professor, then she'll share her sexual delights with both Cat and her brawny carpenter, and when she's successfully brought them together, she can make her escape and explore what's beyond the only town she's ever lived in.

Kurt can't stand the up-tight professor who's hired him to build a gazebo and refurbish her old house—the house he wanted for himself. Even if Meg’s scheme succeeds, he knows Caitlin would never look at him twice. No need to go there in his fantasies… 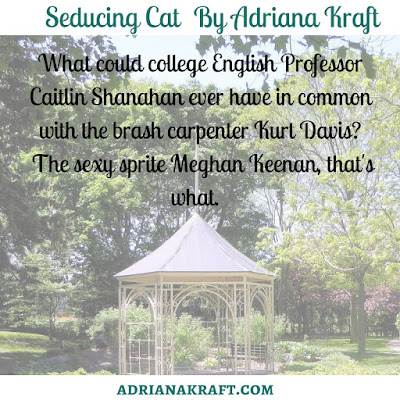 Wringing clammy hands, Cat stood in the small production booth behind the opening night audience. Openings inevitably made her anxious. There seemed no way to prevent it. This was her favorite place to watch the show, because from here it looked as if the cast performed only for her. Besides, no one bothered her when she was in the booth.
The first act had been superb. Meg had the crowd in the palm of her hand, hanging on every word and responding to every gesture, and yet she had a way of not stealing the show. The cast performed well together.
During intermission, Cat had visited briefly with cast members, giving them words of support before returning to the safety of her booth. Successful opening nights were so exhilarating, and this was one of those.
She startled when the door to the booth opened and closed quickly.
“Thought I’d find you here,” Kurt said softly, squeezing into the tight space to stand behind her. “She’s good, isn’t she?”
Cat could barely make out his outline in the dark and quickly returned her gaze toward the stage. His physical presence took up so much of the tiny booth she feared suffocating. “She’s superb. Meg should be in New York. Look at her work the crowd, and they don’t even know it.”
“She has a way about her, all right.”
“She’s a blend of mystery, innocence and eroticism.” She wanted to take back her words as soon as she heard them.
“Ah.” Kurt’s breath heated her bare neck. “She’s all of that, all right.”
“Do you suppose she’ll ever take the next step?”
“Maybe. If she’s supported enough. She’s more insecure about her acting than she lets on.”
“I know. I’ve been trying to help her with those insecurities.”
“I’ve heard. And I gather she’s helping you with some of yours.”
Cat’s heart skipped a beat. She should bite his head off for that comment. But she was suddenly in a joyous mood as the crowd gave the cast a standing ovation. She squealed, “Yes! They loved it.”
“Did you think they wouldn’t?”
“I never know what to think until it’s over. I better get out there.” She turned around quickly and slammed against Kurt’s solid chest. She caught herself on his shoulders, then suddenly felt his arms holding her steady.
In the dark, she couldn’t tell if he was smiling or scowling. And then he brushed his lips across hers. Her breathing stopped. 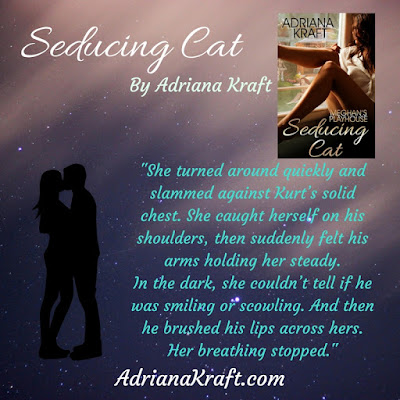 Together we have published over thirty-five romance novels and novellas to outstanding reviews. We love hearing from readers at adrianakraft99@yahoo.com, and here is our website: When It’s Time to Heat Things Up http://adrianakraft.com