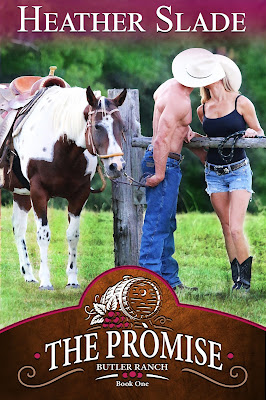 Blurb: Can fulfilling a promise to his dead brother bring love into Brodie Butler’s life again?
When Butler Ranch winery manager Brodie Butler’s brother is killed in action in Afghanistan, his mother enlists him to fulfill a promise she made to her older son. She needs him to find Peyton Wolf, his brother’s lover, and deliver a sealed box to her.
Brodie expects to deliver the news and the box to Peyton then return home to deal with his own grief. But instead of closing a chapter in his late brother’s life, Brodie opens a new one in his own when he meets a woman he could envision himself being with forever.
But would Peyton ever be able to love him like she loved his brother? And could he deal with his guilty conscience for wanting the woman his brother had intended to have as his wife? 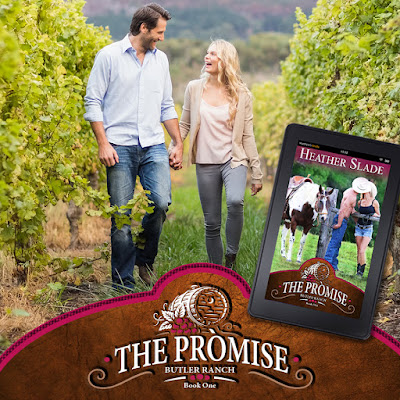 Q & A with Heather Slade:

How did you come up with the idea for this story?
I was getting out of my car in the parking lot of the grocery store in our teeny-tiny town. There was a man walking in who reminded me of someone else, someone who tragically passed away while on a special ops mission in Afghanistan. I came home and wrote, and several weeks later, the story was told. It was one of those books that had to be written. I had a series in mind for quite some time, and the story this encounter inspired, became the first book in the Butler Ranch series.

Is there anything you find particularly challenging in your writing?
Time to write. With two teenage boys and an active family life, getting to carve out time just for me isn’t always easy. They’ve learned, though, that my writing is my job, so little by little they’re interrupting less.

What are your current projects?
Currently I’m working on the second book in the Butler Ranch series, The Truce.

Tell us about your first book. What would readers find different about the first one and your most recent published work?
The very first book I wrote was very g-rated, not that the books I write now are x-rated, maybe r-rated. I like to say the characters in my first book series had sex, they just closed the door.

Is there a message in your novel that you want readers to grasp?
The majority of my books have a “it’s never too late,” message in them. Second chances in love, but also professionally.

Does music play any type of role in your writing?
Music is essential. I write books around specific songs, but I also have very specific playlists for each book I write. If my books are ever made into movies, I have the soundtracks ready to go. With THE PROMISE, I listened to a lot of John Coltrane and Miles Davis.

Are experiences based on someone you know, or events in your life?
A very dear friend of mine was retired special forces working for the agency when he was killed in Afghanistan. While the circumstances of the characters have nothing in common with his life, there about the character he influenced that are my quiet tribute to him.

What books have influenced your life most?
On average I read seven books a week. There have been so many that have influenced me, I don’t know where to begin. The Time Travelers Wife is one of my all-time favorite books. I don’t write books that are anything like it, nor do I share a similar writing style, but there’s something about that book. I probably reread once every two or three years. I can credit that book with making me WANT to write.

Are there any new authors that have grasp your interest?
No new authors come to mind, although I discover new-to-me authors every day. I’ve recently been introduced to Maryann Jordan’s work, which I haven’t read yet, but want to.

Can you share a little of your current work with us?
TRUCE excerpt:
Oh, Lord. What had she started?
It had always been this way with them. She’d challenge him, and then he’d step up and blow her away. Maddox Butler was the least boring man she’d ever met, and the hottest. He’d rocked her world since the first time she laid eyes on him.
She was fifteen, he was eighteen, and it was more than his age that kept him off-limits. He was a Butler—an unmentionable name in the Avila home.
Even then Maddox was all man. Six feet three, with bright blue eyes that danced when he smiled. Mad always looked as though he knew something scandalous that no one else did. His dark hair was short when she first met him, but now he kept his head shaved, just like his older brother, Kade, had.
His rock hard torso would rival any gym rat’s, but his body was that of a man who hoisted sixty-five gallon barrels full of wine like they were a ten-pound bags of potatoes.
His face was chiseled, rugged and weathered from days spent in the vineyard heat—his mischievous smile framed by a dark beard that hid the dimples she sometimes forgot were there. While the women in the Butler family were fair with vibrant red hair, the men wore their olive skin like a suit of armor. His happy trail of dark hair was perfectly place, trailing down from his brawny neck, over his rough-hewn abs to his pelvis.
His splayed hands could cover her ample breasts, their power seeping into her, driving her to the edge with little but their heat, and then be equally gentle when his calloused fingers rolled her nipples.
Alex sighed, knowing those hands would not cover her body tonight. Missing them, missing the fullness she experienced only when Mad’s body penetrated hers, was what kept her coming back to him, even when she knew they were destined to combust.

Do you have anything specific that you want to say to your readers?
I appreciate every, single person who has read anything I’ve ever written. It’s all still a little new to me, so when someone connects with one of my books, or characters, or stories, it is such an honor to me.

How can readers discover more about you and your work?
I’m on Facebook, a lot, probably too much. That’s where I currently talk about my new work the most. https://www.facebook.com/authorheatherslade

Do you have a special time to write? How is your day structured writing-wise?
I have days more than times. I put “Writing Day” on the family calendar, so everyone knows I’ve set that time aside. When I work varies so much. I like to start writing early, just after dawn, because then my day begins on the right track. I also write late at night, if there’s something aching to get from my brain to the page.

Why did you choose to write [genre] stories?
I am a HEA kind of girl. I’m one of those people who is sad and disappointed when I hear about celebrity marriages breaking up. I also love love, so for me, romance was it.

What is for you the perfect book hero?
Strong, smart, confident, attractive men who have a sense of humor and a desire for adventure in their lives.

When you start a book, do you already have the whole story in your head or is it built progressively?
I typically have the general idea, but it definitely builds progressively. I don’t outline because may books never, ever look anything like any outline I’ve done.

When and why did you begin writing?
I started writing the year I hit a milestone birthday. I didn’t give it a lot of thought. A story came to me, and I decided to write it. When people ask me how they can become a writer, my answer is simple. “Write, and then write some more.” For me, I learned that I COULD write a book, and then it became a matter of improving my writing, honing my craft, etc.

When did you first consider yourself a writer?
When I finished my third book, which was the first in a new series. When I finished writing that book, I KNEW I had at least five more in that series that I couldn’t wait to write. Having to write was the deciding factor for me.s

List three books you have recently read and would recommend.
I’m really into Vi Keeland, Penelope Ward and JA Huss right now. I’ve read everything of theirs I can get my hands on in the last couple weeks.

Tell us something that people would be surprised you know how to do.
I was an etiquette instructor at the Air Force Academy for several years, and am also a second-tier (executive) sommelier.

Will you write more about these characters?
Without question. In the Butler Ranch series, there are five books planned, and a spin-off series with six books planned. I’ll be hanging out with these characters for quite a while. Although I also have two more books planned for the Cowboys of Crested Butte series too. Someone once said that she thought I was good at writing families, and not necessarily biological families, families of friends too. I took it as a major compliment, and it’s one of my favorite things about writing . . . getting to hang out with all these characters I love so much, again and again. 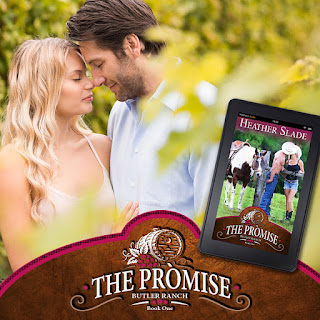 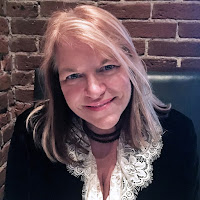 About the Author:
My books are filled with things that bring me joy: music, wine, skiing, families, artists, and cowboys. Not always in that order.

I’m an Amazon best-selling author, and a PAN member of Romance Writers of America. I speak, teach, blog, am an executive sommelier, and all-around entrepreneur.

I grew up an east coast girl, and then spent half my life on the west coast. Now my husband, our two boys, and I happily call Colorado home.