Testimony of the Damned
by K.G. Reuss 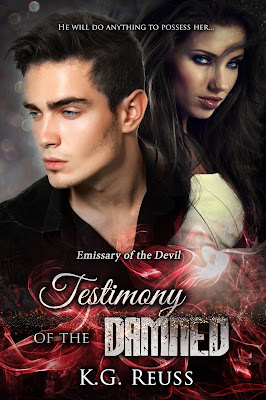 Centuries ago, Brax committed unforgivable sins, killing his lover and himself, and to escape eternal damnation, he made a bargain with the Devil. Now immortal, he roams the earth, corrupting and collecting souls for Hell’s infernal legions in anticipation of the coming apocalypse. And he is very, very good at what he does.

When he is given the special assignment of corrupting Maggie Westbrook, a seemingly timid high school senior who also happens to be one of the Nephilim, children of angels with the purest of mortal souls, Brax believes his goal of commanding his own legion in Hell’s army is finally within his reach. Maggie isn’t just any Nephilim; she’s the lamb who will break the seals that will usher in Armageddon, and her corruption will tip the scales of that final battle towards Hell.

But he quickly finds that the job will be more difficult than he first anticipated. For one thing, he has competition in the form of the demon Corbin Black, whose powers of corruption rival his own. And Maggie is not unguarded, as the Nephilim and host of Heaven will do everything they can to stop him. Most disconcerting, though, is Maggie herself. From the moment Brax first sees her, he is drawn to her purity and innocence, and as he comes to know her, long-forgotten emotions begin to rise within him, emotions he hasn’t felt for centuries…

While Testimony is an epic story of good and evil battling for control of an innocent soul, with the fate of the world hanging in the balance, it’s also the more personal story of a deeply flawed man trying as hard as he can to overcome the devastating sins of his past and find true love and redemption.

Tell us about Emissary of the Devil: Testimony of the Damned.

Emissary is a dark tale about a demon named Brax who basically wants to watch the world burn for the sake of the heat. He hated his mortal life, did some very bad things, and found himself on his knees at the gates of Hell. He was offered a job corrupting and collecting souls for the Devil. He took it and became very good at it. He gets tasked with the job of corrupting the soul of a Nephilim female. It isn’t until he meets her that he realizes that he wasn’t looking for revenge on the world. He was looking for redemption. He finds it in her. He is then faced with a choice. The book is more than a story about a battle between good and evil. It truly is the story of a deeply flawed man looking for his own piece of heaven.

What initially inspired you to write Emissary of the Devil: Testimony of the Damned?

I work in emergency medicine. I see a lot of things--some wonderful, some ridiculously tragic, and some that make me shake my head. Add to it the awful stories on the news and Emissary started to take shape. I always wondered what spurred on the terrible decisions, and what positive energy was involved in the wonderful occurrences. I figured there had to be an angel and devil on the shoulder of the individuals on some of the things. I took the thought one step further and created the demon Brax Shepherd, the very creature who could spur on those terrible thoughts in a human mind. And, of course, with any drop of evil, there has to be good and so Maggie was born.

Tell us little about the characters in Emissary of the Devil: Testimony of the Damned.

Brax is terribly, deeply flawed. He’s arrogant, sure of himself, and bad to the bone. Unknown to him is his softer side--a side Maggie pulls out of him.

Maggie is Brax’s opposite in every way possible. Where Brax sees all the bad, Maggie sees the good. Maggie has suffered in her life but still remains strong.

I had a hard time getting Brax to do bad things and still make him have redeemable qualities.

I loved writing the ending. It was a culmination of everything that had happen. It was the moment of “Does he get the girl or not?”.

I am currently working on a few different things. I’m working on the sequel to Emissary of the Devil. It’s called Gospel of the Divine. I wrote a book last year called The Chronicles of Winterset: Oracle. I just finished the sequel to that (Wildfire). In addition, I’m working on a story called For Ever--it’s a story about a girl who can see the dead. I tend to write fantasy stories. However, I’m trying my hand at a story called Gunny Perkins: /nerd. It’s a YA comedy about a nerdy girl just trying to get it right. I have a few other things going on like The Coyote Council (vampires and hunters), The Boy Who Cried Werewolf (middle-grade werewolf story), The Secret Life of Death (the story of existing after dying), and Oddworld (dragon shifters!). This is just a short list. I tend to come up with different ideas daily so that list may grow over the coming months!

Emissary is very dark. There are some rather unsavory situations that may make a reader blanch. The story may create anger in the reader before it creates anything else. That’s the point. I want the reader to feel the anger that Brax feels. I want the reader’s emotions to evolve with Brax’s. At the end, I want them to feel all the things he feels.

“Do all the girls just fall for you?” she asked softly, surprising me.

“Yes,” I replied honestly, nudging her. “So, what’s your deal? Lesbian?”

“No!” she practically shrieked, and her face burned redder than blood spurting from an open wound. She hopped up and smoothed down her skirt.

“I was only kidding,” I chuckled, watching her discomfort.

“I-I like guys.” She turned back to me, her face still flushed.

“Then I’m sure you know Lance is into you. What’s the deal with that? Not a fan of footballers?”

“I don’t know. I like Lance enough. He’s a nice guy. We’ve been friends for ages, but I don’t really feel that pull for him.”

“Yes. You know that feeling that you get in your chest when your heart flutters whenever you’re near someone you like? It-it feels like a million butterflies are set free within you. Your breathing slows, your lips part, your soul sings for that person, and you just know—you know you can’t be without them even for just a moment because that moment is an eternity. It’s-it’s magnetism.” She sat down beside me again and tucked a stray piece of hair behind her ear.

“So, love?” I asked softly. “You know, you can’t love someone without knowing them. Maybe your argument here is invalid.”

“I don’t believe that’s true.” She smoothed her skirt down and looked at me with her clear blue eyes. “Maybe it’s the unknown that sparks a fire, you know? It’s the mystery. The intrigue. The enchantment in the possibilities. I could love for all of those reasons.”

“An unconditional love regardless of knowing someone?” I asked, miffed. Angels really were a weird lot.

“I suppose you could call it that.” She shrugged, smoothing her skirt again. “I think the world needs a little more love in it without all the knowledge that knowing someone brings. I think it would create a more compassionate world. If we loved before we hated, we’d live in a very different place, don’t you agree?”

“You’re an incredible person, Maggie,” I said softly. Her beautiful blue eyes sparkled with her passion, making me want things I hadn’t thought about in years. Her words held endless possibilities; she made me feel. Genuinely feel. I pushed those feelings down, jamming them hard into the back of my mind, locking them safely away. Maggie was a job. That was it. I couldn’t get enraptured by anything she said or did. She was part angel. This is what they did. They were our opposites. While I tried to corrupt, they tried to purify, although I felt that they were somehow lacking in that department considering I took more souls than they did.

K.G Reuss was born and raised in Northern Michigan. She currently resides there with her husband and her children. When K.G. Reuss isn't pursuing her love for reading and writing, she is working in emergency medicine.