Scarlett Scott will be awarding a Kindle or paperback copy of Books 1 & 2 in this series to a randomly drawn winner via rafflecopter during the tour. Please visit GoddessFish.com to follow the tour, remember the more you comment better your chances on winning. 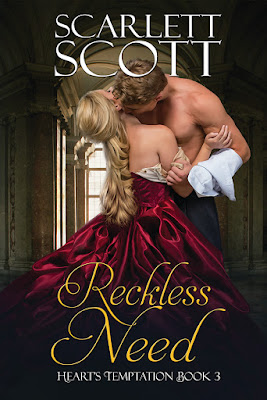 Heath, the Duke of Devonshire, has been living a passionless life of penance after losing the woman he loved. Determined to do his duty, he’s in search of an innocent bride with a sterling reputation. A bride who’s nothing at all like Tia, Lady Stokey.

The Duke of Devonshire may be handsome, but he’s as boring as a bowl of porridge. Or so Tia thinks until he carries her to her chamber and undoes half her buttons while kissing her senseless.

The moment he scoops the delectable Tia into his arms, Heath wants her in his bed, and he’ll stop at nothing to have her there. When they unleash the scandal of the century, they must face consequences that are deeper and far more dangerous to their hearts than either of them imagined. Will they find love, or was the reckless need between them doomed from the start?

Her taper cast a half-moon before him. It stopped just short of revealing him. He debated the wisdom of stepping forward, entering the light. If he had a modicum of sense, he’d spin on his heel and disappear into the darkness from whence he’d come. He would leave her alone. Purge her from his mind. Settle on a nice biddable young lady for his wife. Forget the desire casting a heady spell over him. Never again think about the luscious body hiding beneath her dressing gown. Or peeling the dressing gown from her while he kissed her senseless.

He took several steps forward, stopping only when he was a mere foot from her. Her eyes were wide, meeting his and sending a new jolt of awareness straight through him.“Heath?”

Hearing his name on her lips was his undoing. If she’d called him “Your Grace” or even “Devonshire”, he’d have been able to resist her. At least, that’s what he told himself as he closed the final distance between them, his hands going to her waist as if they belonged there. And perhaps they did. Tonight, if not every other.

“What are you doing here?” she demanded, sounding breathless.

“That should be obvious,” he whispered, his gaze lowering to her seductive mouth.

“You’re mad,” she returned, but she licked her lips, giving herself away.

He knew she felt the same reckless need burning between them. He knew she was equally as powerless to resist. “Perhaps I am,” he agreed, his hands sliding to her bottom, round and firm. Thank God she wasn’t wearing a bustle. He filled his palms with her soft flesh and gave her a gentle squeeze. She gasped. “But somehow, I rather think you don’t mind.”

The hardest part of writing this book was, without a doubt, the research required. Writing historical romance is always very demanding in terms of the amount of research and attention to detail required, and in this case I was fairly unfamiliar with the art of the time period beyond what I recalled from a college art class. I spent a great deal of time researching artists and artistic movements and exhibitions at galleries.

I enjoyed the hero and heroine. The heroine is spunky and bold, and she really shakes up the hero exactly the way she needs to. I loved writing characters who, while complex, seemed to fit together so nicely.

History inspires me the most. Give me some primary sources, and I’m going to come up with about ten new ideas for books in no time. History is so rich with surprising facts and intriguing people.

I’m writing Book Five in the Heart’s Temptation series right now, with Book Four (Sweet Scandal) just having been recently released. At the same time, I’m working on another historical romance series with 3 books in the works. I’d also dearly like to get back to my contemporary romance series whenever I can, but for the moment my historical romance readers are keeping me quite happily busy!

The heroine in Sweet Scandal, Helen, is one of those characters for me. When I originally envisioned her story, I paired her off with a different hero than the one who ultimately appears in the book. As I sat down to start writing, I realized that the hero I’d chosen wasn’t challenging or interesting enough for her. And when I found the right hero, Helen grew and changed over the course of the story in ways that really surprised me and ultimately, I think, worked out far better.

Award-winning author Scarlett Scott writes historical and contemporary romance with heat, heart, and happily ever afters. Since publishing her first book in 2010, she has become a wife, mother to adorable identical twins and one TV-loving dog, and a killer karaoke singer. Well, maybe not the last part, but that’s what she’d like to think.

A self-professed literary junkie and nerd, she loves reading anything but especially romance novels, poetry, and Middle English verse. When she’s not reading, writing, wrangling toddlers, or camping, you can catch up with her on her website www.scarsco.com. Hearing from readers never fails to make her day.