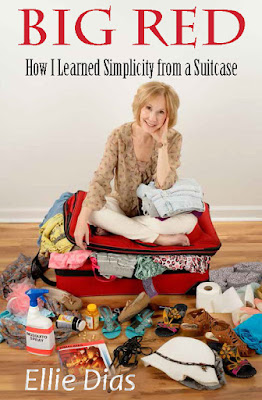 Ellie’s trip to the Himalayas evolved into a spiritual journey of self-inquiry and soul-searching. She learned a lot about herself over the course of 15,000 miles, and her best teacher was Big Red. Every step of the way, she kept trying to tell Dias something.

Seeing others struggle to lift Big Red made her painfully aware that her obsessive-compulsive nature, and rigid concept of how life should be, does not line up with Buddhist philosophy.

Traveling in a land where simplicity reigns, Big Red was a symbol of how attached she was to what matters least. With each opening and closing, each lift and drag, Ellie was more preoccupied with how to hang on to her must-haves instead of being in the moment. She almost lost sight of the meaning of her journey.

Venturing into the unknown was not the perfect journey that Ellie had imagined. Despite months of planning, she was frequently pushed off course by her perfectionism. From the moment Ellie attempted to book her flights, she was confronted with obstacles at every turn. From a bankrupt travel agency to a missed flight, from a snafu at a foreign bank that ends in a tense discussion with the Chinese authorities to struggling through her first few days without luggage, each day seemed to be another lesson in letting go that she had to learn. Life became one long trek through a reality that was mired in the depths of a cosmic education in Murphy’s Law.

In the face of intense vanity and obsessions, Ellie also learned a profound lesson or two from the people and cultures she encountered. Their simple lifestyle only leaves enough time for what is necessary. Everything is linked to their spirituality. Compassion, love, and respect for all sentient beings is ingrained in them.

Slowly—very slowly—Ellie began to get the picture. A bag of trail mix here, a Waterpick there, she began to let go of the things that had weighted her down, physically and emotionally, on her trip of a lifetime. But would it be enough?

Tell us about Big Red: How I Learned Simplicity from a Suitcase.

Hoping to experience simplicity and contentment in the Happiest Place on Earth, I carefully planned my trip of a lifetime to the nth degree. Little did I know that nearly every step would be fraught with challenges, mishaps, and detours. Everything that could go wrong on my trip to the Himalayas, did. From multiple booking problems to a bankrupt travel agency, altercations with Chinese authorities to a crucial missed flight and more, it was a fiasco from the start.

Lastly, it evolved into a spiritual journey of self-inquiry and soul-searching. I learned a lot about myself over the course of 15,000 miles, and my best teacher was Big Red. Every step of the way, she kept trying to tell me something about letting go.

What initially inspired you to write Big Red: How I Learned Simplicity from a Suitcase?

I wanted to take my readers on an exploration of the fascinating and venerable cultures of the Himalayan people. I wanted to give them a real sense of the compassionate nature of these people, how the symbols of their religion are displayed everywhere shaping attitudes, molding thoughts, and how life can be lived with limits to materialism. I feel I have achieved this with my detailed experiences, photographs, videos, and personal encounters with the Bhutanese farmers, Newari people of Nepal, and the nomads of Tibet.

Tell us little about the characters in Big Red: How I Learned Simplicity from a Suitcase.

The story revolves around the interdependent relationship between Big Red and me.

Traveling in a land where simplicity reigns, Big Red was a symbol of how attached I was to what matters least. Each time I opened and closed Red or had to drag her through an airport, Red alerts taught me that my stuff not only took up suitcase space, it took up space in my mind, limiting me from experience the true purpose of my journey. Red made me painfully aware that my obsessive-compulsive nature and rigid concept of how life should be does not line up with my passion for Buddhist philosophy.

What was the hardest part of writing this book?
It was difficult to take a realistic look at myself, admitting to the pitfalls that come with my materialistic ways and extremes; finding the courage to write about my life struggles and failings, past and present. In both situations, exposing bits of my psyche and putting them out there for the public was the fear of being judged.

I enjoyed writing every chapter because each one touched on all three genres: travel writing, spiritual, and humor.

I am completing the second draft of a novel which explores the question, “Is evil genetically driven?”

We come into this world with a genetic blueprint. By our very nature, not only are our physical attributes hardwired into our genes, so are many of our personality traits. There is compelling scientific evidence that in the human genome, which is our complete set of genes, lies a biochemical code for aggression. Mixing science with fiction, this is a story about a young man who discovers a horrific secret—he is born into three generations of male psychopaths with criminal behavior. The genetic predisposition skips him, but fear is set in motion when his young son exhibits signs of a “fledgling psychopath”.

This dark novel does a 360 from the lighter side of Big Red.

The reader will learn how and why the teachings of Buddhism guided me to a different kind of spiritual path after so many years of being completely devoted to the Catholic church.

I have a dramatic vision of the elephant scooping me up with its trunk and deftly placing me on its back, just like in the circus. Instead I step onto the platform with the help of my mahout, or elephant driver. He tells me her name is Mumbai as I cautiously step into the basket. He situates me close to the elephant’s head, straddling her with my legs, which are hanging out the sides of the basket. It almost seems as if he is trying to ensure that all 100 pounds of me can keep the entire basket balanced atop this lightweight of 12,000 pounds. Not possible, I think with amusement and doubt, but he is so intent on making sure I am secure and safe that I don’t worry. As we lurch our way into the jungle I have an adrenaline rush and want to pinch myself. I’m riding a real elephant into a real jungle.

Three hours later we head back. I’m disappointed that we haven’t seen any exotic lions or tigers, or anything else of much interest. But it’s not over yet. My guide asks if I want to ride Mumbai back to home base. I assume he means for me sit behind him on the elephant’s neck. Although this isn’t on my bucket list of things to do before I die, being in the moment, I respond with a yes.

I realize my guide is making no attempt to join me. I assume he’s going to use a rope to lead Mumbai back. No. He hands me the elephant goad he used. Unnerved, I have no idea how to direct an elephant, with or without an elephant goad. This was definitely not listed in my travel itinerary under must-do.

I lean down to hand the guide my camera so he can take my picture. The picture taken, I wait for him to lead the way. Instead he jogs a few feet ahead, snaps one more picture, then takes off running, with my camera. Are you kidding me? What kind of guide abandons a tourist in the middle of a jungle, let alone one sitting atop a 12,000-pound elephant? How the hell am I supposed to find my way out? Fear washes over me. I blow out a series of short breaths. My mind is busy cataloging the possible dangers. What if the elephant gets spooked by one of those as yet unseen Bengal tigers or a sloth bear or a jackal? What if I fall off and get trampled? Surely the guy is coming back?

After a while, my so-called guide still nowhere to be seen, I realize I am alone. Totally alone. On top of a huge beast. In the middle of nowhere. Feel free to laugh if you want. Petrified and fuming, I have no option other than to cling to the elephant’s neck. Something tells me sitting upright and maintaining balance is key. Instead I’m half on, half off her neck, grasping her long strands of hair as we go down a steep hill. The basket tilts at such an angle that I feel as if I’m about to be shot out of a cannon.

As we move forward, holding on with a life-or-death grip, my legs flailing against her sides, I pray that Mumbai has the way committed to memory. Elephants never forget, right?

Ellie Dias is a devotee of Buddhist philosophy, meditation and yoga. Her career has been focused on health and wellness as a biology professor, pediatric nurse, clinician working with families whose babies were at risk for SIDS, and division VP of a women’s health care company. Her debut book, Big Red, was inspired by a solo journey to the Himalayas. It’s a tale of perseverance and humor as she struggles to jettison her Western ways while lugging a 95-pound suitcase jampacked with her bare necessities.

A watercolor and pastels artist, she lives with her husband Ron, and their dog Roxie in Massachusetts.