Enter below for a chance to win ebook of Love in
Carson Falls from Paisleigh Aumack! 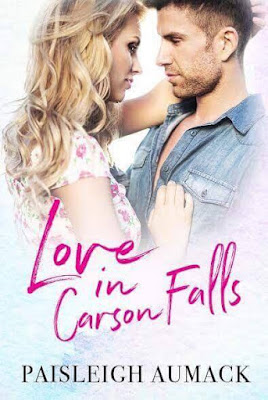 
She never thought life would beat her down. She never imagined the man she loved doing it either. Starting over in a small town was her only option. Once she arrives in Carson Falls, she realizes her life never really began until the locals, one specifically, proves that there are things that can mend your spirit.


He never thought the mother of his child would walk away. He also never thought she would end up dead. Living in a small town his whole life, he knew what his life’s meaning was, or so he thought. Once a stranger from out of town starts teaching his daughter piano, she proves that life has much more in store for him.

This is a story about loss, love, and how music can teach us about ourselves. 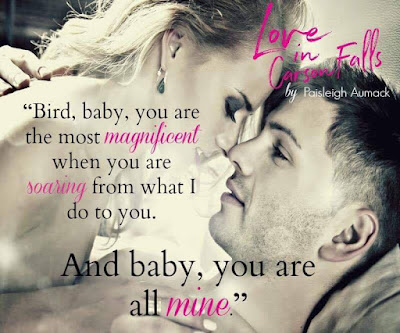 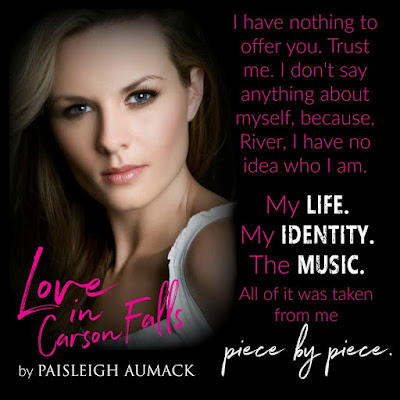 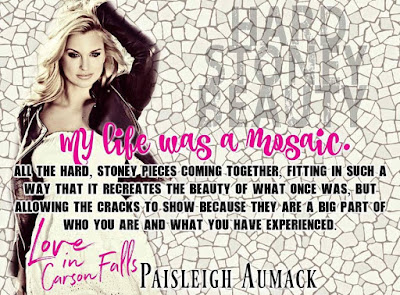 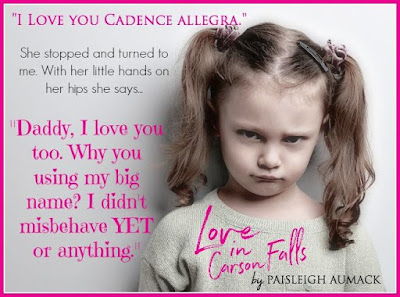 Tell us about Love in Carson Falls.
It’s the first in The Falls Series. Overall, it is a feel good story about how one part of our past won’t and shouldn’t define the rest of our lives. Also, it’s about love, loss, music, and how ending up in a small town can be the exact thing you need to rediscover yourself. Let’s not forget the sexy steamy parts!. {wink, wink}

What initially inspired you to write Love in Carson Falls?

Believe it or not, a song. I heard it and a specific part made my brain overload with ideas.

Tell us a little about the characters in Love in Carson Falls.

Well, the lead male, is River Bradshaw. He is a single father, firefighter, and all around southern gentleman. He is protective, demanding at times, and loves with his whole soul.Arianna Morgan, my female lead, has fallen prey to the dark side of relationships, giving up the most important parts of her. She escapes to a small town to start new and with the help of some important people to her, she gets that.
Cadence (Cady) Allegra Bradshaw is River’s spunky, sassy, wise beyond her years 5yr old.
Penelope (Penny) Sloane is Arianna’s best friend from college who lives in Carson Falls which is why Arianna goes there.
I really could go on with this question forever so I will say there are Braxton, Miss Thelma, Mickey, Rhett, Jury, and some others that you will meet in The Falls.

The actual book took me so long to write because at the time I was working full time. I had some times I was really blocked so that didn’t help either. But once I freed up and was able to focus, the words flowed.

I can’t give full details, but I was able to draw on an experience and make someone very important to me a part of the book. It may not be a favorite of everyone else, but it is of mine.

There is a secret project that I am working on which will take some time. But I have already started book 2 in The Falls Series which will be Braxton and Penny’s book. They are going to drive me to drink.

This is my first full length and I truly respect that it may not be everyone’s cup of coffee. (I don’t drink tea) Parts may be difficult to get through, but stick with it because it really is a feel good story. I am open to speak to readers about my work and love doing so. All the books will be able to be read as standalones, however, it is recommended they are read in order so that you can get to know all the characters. After all, you never know who might speak up and tell me to write their story. 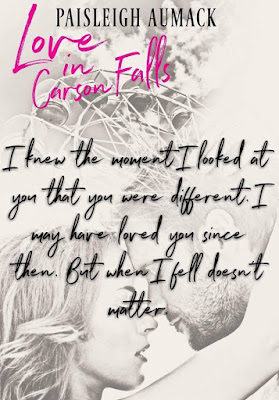 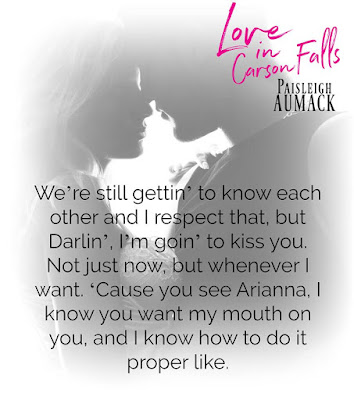 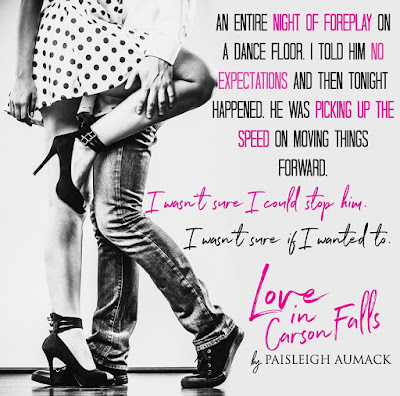 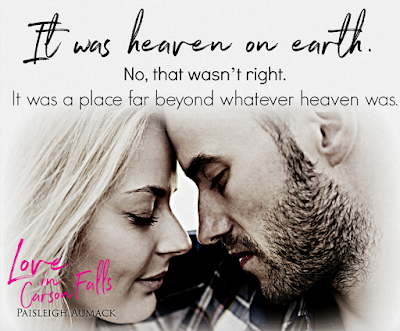 The amount of people already inside was insane. Penny grabbed my hand and pulled me deeper towards the VIP area. I’m wearing heels and have a little buzz going so I bumped into random people as she pulled me. One of the guys I knocked into looked me over like a meal and smiled at me. It was totally creepy and made me nervous. He watched me go the rest of the distance to VIP.  I still felt his eyes on me, so I looked in the direction we came from, and he wasn’t there. That was strange.


We made our way to the corner section. As we approached more velvet stanchions, a sign hung on one near another gigantic gentleman that read ‘Reserved for VIP Members’. Penny dug through her clutch and pulled out some type of card; it was enough to get us inside the ropes. There was one long, black couch, a private, much smaller version of the long bar, and two cream Marylin high-back chairs. There was no one else in here, so we got comfortable on the couch after we placed our orders for professionally-made Grapetinis.

“I really want to dance. The crowd is decent tonight and full of hot guys,” Penny nonchalantly said as she scanned the crowd. “Can we finish our drinks first? I will go out there with you. I don’t want to be left back here. Some guy ogled me before and it creeped me out. It feels like he’s watching me.”  I shivered but not like a River shiver. It was in disgust. “Yea, we can. But Ari, if you feel that again, tell me. I will have Reggie keep an extra eye on us.”“Sounds good to me. Now,” I swigged back the remainder of my drink and stood up, “let’s DANCE!”Just as we made it to the dance floor, the song faded out and a new one started to pump through the speakers. The selections here were either something in the wide rock, rhythm and blues, or country variety. No hip hop. Only booty-shakin’ music. The beginning of Luke Bryan’s “Country Girl (Shake It For Me)” started, and Penny and I looked at each other, smiled huge, and then started to shake it for our guy Luke. The country line dance moves came back like they never left, and we were having the time of our lives. A few more songs, including Blake Shelton’s “Footloose” reboot and Trisha Yearwood’s “She’s in Love With The Boy” played, and then things slowed down with Chris Stapleton’s “Tennessee Whiskey”. Penny and I were no strangers to dancing with each other and we were letting go tonight, so we started doing our thing. A guy came up behind her and he seemed familiar, but my buzz wouldn’t allow me to place him. I felt hands hit my waist as I was swinging my hips to the beat. Those hands didn’t incite the same shiver or tingle that River’s hands did, but what the hell. I was here to have fun and dance, so I turned in his hands and saw Mick. Shit. Slowly moving to the bluesy country song, my hands rested on his shoulders and his landed on my hips, his fingers digging in slightly right above my ass. Too caught up in the melody, I caught my rhythm and took Mickey with me. My mind slipped into every note of the song. I didn’t think anything of it and just kept in time to the music, letting it move through my blood.When I heard the final notes to the song, my eyes opened and I saw Penny looking at me with huge wide eyes. I also no longer felt hands on me. Slowly, I turned around to see Mickey being escorted to the door by Reggie, and Braxton weaving through people to get to our spot on the dance floor, and River. A very pissed, ready to kill, River. I only knew this after I was done eye-fucking the deliciousness that he was. It may have been the alcohol, but at this point, I didn’t care. I took my time and started at his cowboy boots. Made my way to his dark blue-washed jeans that fit his perfect ass in such a way it should not be allowed loose on the female population. Up a little more to the pink button-down shirt he had on with the two top buttons opened. No blazer. No smile. Just his hands on his hips, and his eyes narrowed and full of fury.“Riv…,” I attempted, but he shut me down fast and cut his narrowed eyes to me.“Darlin’ the best thing for you to do right now is not say anything. Not until we have privacy and I’ve controlled my need to commit murder against a man who, Sugar, get me when I say this, is a total dick. Mick is about one step up from your ex. I thought you got the message that day at Thelma’s store. But it seems you’re forgettin’ a bunch of messages the past few days.” I felt like

I was just scolded like a child, and that started to sink in and pissed me right the heck off. Who does he think he is? 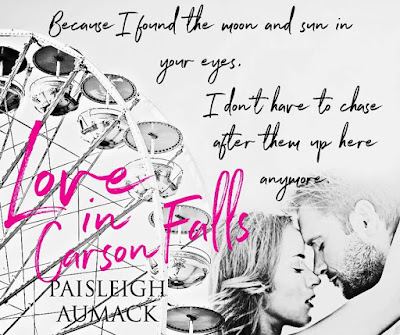 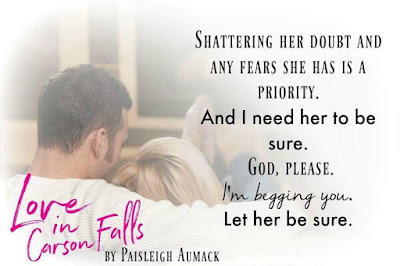 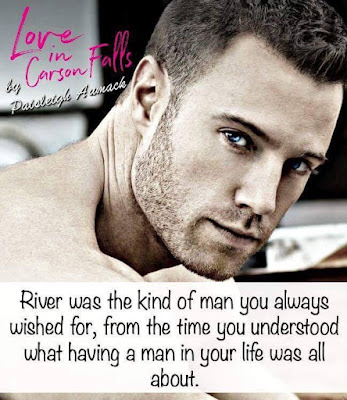 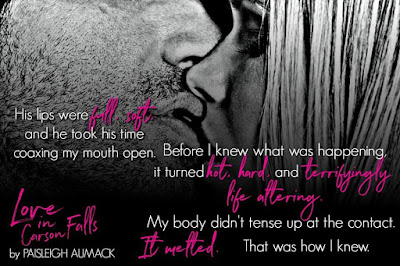 Paisleigh Aumack was born in Red Bank, New Jersey. She grew up in a small barrier island town and has lived there all her life. She has always loved music, going as far as being a trained musician. Her tastes in music range all over the board, but currently, her heart belongs to country music.

Paisleigh is engaged to the love of her life and lives a fairly quiet, peaceful existence. When she isn’t working, she is writing or she is reading. Or singing at the top of her lungs. Paisleigh began writing a short time ago because she had a story to tell.