Enter below for a chance to win $5.00 Amazon Gift Card
from Lily Luchesi 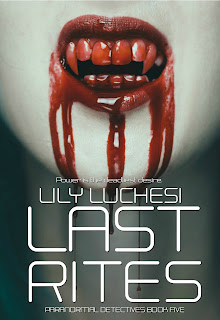 Power is the deadliest desire.

With Leander put to rest and the Paranormal Investigative Division taken care of by the Coven Mistress, Danny and Angelica are finally ready to take some time for themselves while Angelica gets used to her new role as the Empress and they make their relationship official.
When people close to Angelica are murdered by what seems to be a rogue vampire, their sabbatical is cut short in order for her to find the perp and execute him or her.
But this is no ordinary vampire. When the truth is revealed and secrets come to light, it will prove to be Danny's biggest test of faith yet, and Angelica's reckoning of her past, present, and future. Most of all it will raise a single question: just what makes a monster?

Last Rites is the fifth book in my Paranormal Detectives Series, and when I started writing the series back in summer 2014, it was never supposed to exist! The storyline came as a surprise to me, but this was the easiest book in the series to write.
It features one of my favorite types of villain: the classic, bloodsucking vampire, the likes of which I haven’t written about since book one, Stake-Out. It’s also a huge turning point for Angelica Cross as she realized what she really is, what she wants out of her life and her position, and makes her question her own motives.

I have no idea! Seriously, the book wasn’t supposed to exist. Nothing after book one was really “inspired”, it all just came along, one after the other, as nearly complete ideas. Sometimes it felt like Angelica and Danny were the ones telling me their story, and I was just taking notes.

Tell us little about the characters in Last Rites (Paranormal Detectives Book Five).

The series is ongoing, so regular readers will know Angelica Cross and Danny Mancini already, my MCs whom I seem to love putting through Hell. Angelica is a character who I never really created, she just came to me and introduced herself. I love strong female leads in my books, and she really set the bar for me.
Danny is a hotheaded mortal I built from the ground up based on growing up in an Italian family (including cops) in Chicago. He’s a more personal character than I ever give him credit for.Strong, stubborn, slightly possessive, but loyal to a fault, he’s not quite a hero.
I have two minor charactres, Harriet Galbraith, who leads Britain’s Grand Coven of witches and wizards, and Sean Wireman, a male siren who fought in WWII. Both play important parts in the story, and Sean will have his own spin-off novel, Never Again, which will be released on December 5th.

The ending. Not to give anything away, but I always follow my characters’ leads with the storyline, and this time I didn’t. Angelica really begged for a particular ending and I didn’t allow her to have it because it would have ruined book six in the series.
It was also difficult to write because it’s the end of an era. When the series picks up again way next June (2018), it will be different in many ways, because of this book’s ending.

I can’t say much about it, but there’s a scene later in the book between Danny and Sean that has a very big reveal that changes Danny’s entire life and I loved writing it. I never planned on the scene taking place, and I love their rivalry.

I also have Never Again, which I mentioned above, and various anthology projects releasing later this year.

I’d like for them to know that, except for the leather-clad vampiress, this series isn’t like what they’ve already read from most of the PNR authors out there. It’s been described as Charlaine Harris meets Stephen King, and I think that is fairly accurate when you take my plots into account. The series can be read as standalones books 1-4, but if you read book five at least pick up book four first.

Lily Luchesi is a young author/poet born in Chicago, Illinois, now residing in Los Angeles, California. Ever since she was a toddler her mother noticed her tendency for being interested in all things "dark". At two she became infatuated with vampires and ghosts, and that infatuation turned into a lifestyle.She is the award-winning author of the Paranormal Detectives Series, published by Vamptasy Publishing. She also has short stories included in the following anthologies: Death Love Lust, Naughty Bedtime Stories: In Three Words, Naughty Bedtime Stories: Four You, Lurking in the Shadows, Lurking in the Mind, Black Magic, Weirdbook #35, and Beautiful Nightmares.

When she's not writing, she's going to rock concerts, getting tattooed, watching the CW, or reading manga. And drinking copious amounts of coffee.