Blog Tour: Tied Up in Heartstrings by Felicia Lynn 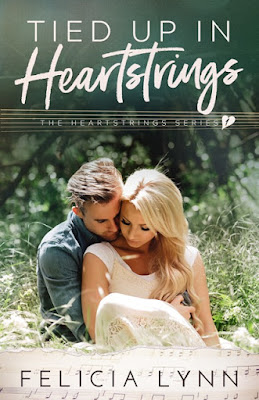 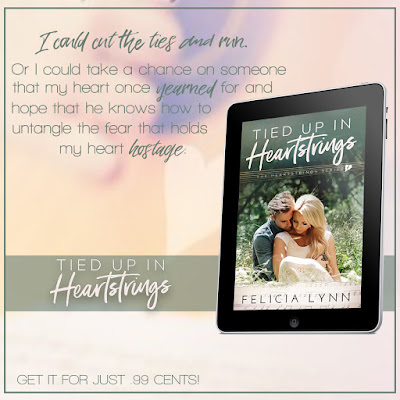 Jed designed this home especially for us—every detail. Until recently, I’ve loved everything about living here for the past five years. Now I’m drowning in the memories and details hiding in each crevice and having the memories crash into me at every corner is too much. I’m just waiting for the massive undertow of these constant reminders to drag me under. This house might have once been my dream home, but it’s not anymore. Now I’m suffocating in it.

Who builds their picture-perfect dream house as their very first home? It’s not normal, but being the perfectionist Jed was, he couldn’t have it any other way. He strived to give us everything one could ever want or wish for, but it was at the expense of sacrificing time with Sierra and me to provide it. He wasn’t wired to reject us in any way, except with the most important thing either of us wanted—his presence. If only he could’ve been satisfied with a simpler life. We would’ve been happier with less if it meant having him around more.

He’d proudly tell us he was working hard so he could lay the moon and stars at our feet, and we always had the best of everything, even if I didn’t need that. For Jed, it didn’t matter. He thought we deserved the best and never settled for less. I didn’t understand, but in his eyes, the image of the materialistic wealth he worked so hard for somehow signified his love, commitment, and loyalty to his family. Plus, the approval from outsiders mattered to him, and accolades drove him even harder.

His career was an obsession, measuring his success with every step up the corporate ladder, but it was never enough. Maybe if he weren’t hyper focused on that ambition, he’d be here now? We could still be an ‘us’—whole and complete.

I round the corner to the kitchen to find my brother and his wife sitting at the farm table talking softly to one another while the others mingle in the adjoining family room. Jason’s posture changes as soon he notices me step into the room, and Kate whispers something to him as they both attempt to hide their exhaustion and worried expressions. Why fake it anymore, but whatever makes them feel better. My sister-in-law jumps up, extending her arm out to embrace me, and my brother is quickly beside her as I approach her open arms.

“What’s up, babe? Are you hungry?” Kate asks a little too hopeful as I step into her hold. I shake my head before resting it momentarily on her shoulder then pull away slowly.

“You should probably eat something. Do you want to take a nap or rest for a bit? You haven’t slept in days, and the house will be cleared out soon.” Jason prattles franticly, barely taking a breath between each question that is really more of a suggestion.

I’m not sure what he’s thinking, though; none of it makes sense realistically. Who could possibly casually eat and sleep while their entire world is crumbling around them? I’m being buried alive with the guilt amongst the rubble of that plane crash, and I’m somehow supposed to take care of my health while I dig for my life. The idea is insane!

The emotional roller coaster from the fluctuations of sadness, anger, and fear are overwhelming, and it’s taking a toll, making me an extra-bitchy crazy person. As long as I’m getting plenty of rest and eating a proper diet, I suppose anything goes. Nonsense.

Frustrated, I take a deep breath, and although trembling, I find my voice. “Jason, I need to leave and get out of this town for a little while. Can you help me figure out a plan?” I plead.

Despite being a seriously overprotective older brother growing up, he has always been my white knight—saving the day whether I want him to not. I’m habitually resistant to his overbearing tendencies and try to avoid directly asking for his help, but today, I’m grateful for his presence in dealing with this nightmare. I’ll gladly accept his control freak tendencies in exchange, especially since I’d rather escape it.

For the past eleven days, I’ve risen from the bed every morning, hoping after another sleepless night that this is just a nightmare that will fade with the light of day, but it hasn’t. Each passing day, the nightmare becomes more and more real, leaving me a weak and incredibly vulnerable version of myself. I’ve fought tooth and nail for a long time to prove to my brother I could be self-sufficient and make my own decisions. He finally accepted that I was filled with pride, but this changes everything. I need him more now than ever before.

Getting back to anything normal with this giant hole inside my chest feels impossible. I’m empty, and I have no idea how to fix it.

Felicia Lynn, author of The Learning Curve series and Heartstrings series, is a transplanted Florida girl, born and raised, who lives just north of Atlanta, GA. She spends most of her days holed up in a cozy chair with her laptop, writing about the characters that live in her head. When she’s not writing, you’ll find her hanging out with her family and friends or interacting with her readers and fellow book lovers on social media! She loves traveling, reading, live music, baseball, good food and great company.

Felicia writes contemporary romance and co-wrote The List, a mystery/suspense book she collaborated on with professional poker player, Chris Bell.