Enter below for a chance to win $5.00 Amazon Gift Card
from Pamela Schloesser Canepa 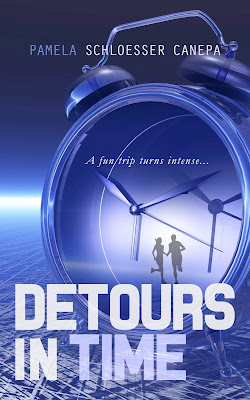 Feisty Tabatha, a struggling artist, and Milt, an awkward Science professor set off on a journey to the future.  What was supposed to be fun soon turns quite intense when they make discoveries about their future selves and end up on other “detours.”  The two set events into action that may save one life, yet destroy another.  Can these friends of completely different mindsets agree on a course of action?   Can Tabatha stick to Milt’s rules of time travel?  Both Milt and Tabatha struggle to witness and not participate in a place and time that is not yet their own.
Amid the backdrop of a future that reveals great wonders and horrors, Tabatha and Milt must resist the temptation to use discoveries from future technology to aid them when they return to the present.  Detours in Time starts as a fantastic escape and grows to present many moral dilemmas and surprises that can either destroy the strongest bond or bring two people closer. 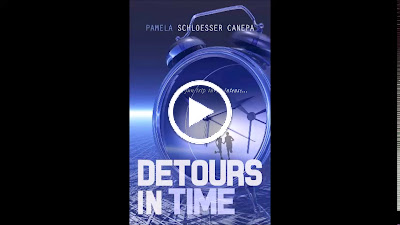 Tell us about Detours in Time.

Detours in Time is a sci-fi, time travel adventure.  Writing it started out as a nice vacation for me, and then it grew more tense and suspenseful.  In writing it, I grew close to the characters, and I am writing a sequel while I get ideas for even a third in the series.  I added in a few side characters in order to further develop the character of Tabitha, and now there’s a family of people that I am concerned with, in her present and her future.  I’ll stop before I give too much away!  So, it started as fun with my imagination, grew more tense and anxious as I imagined some of the horrors a traveler might see in the future, and then ended up with some soulful decisions made by the characters.

What initially inspired you to write Detours in Time?

I responded to a writing prompt about traveling to the future.  I mulled it over for a while.  My long walks with my dog sparked my imagination, as always.  On a pleasant walk, I can look up at the sky and imagine flying to another planet.  On a hectic walk, he is chasing some creature that’s smaller than him; this is what fueled my ideas of hybrid animals.  I also believe that parts of this book reflect my anxieties about the what-ifs.  I was also inspired by a mother’s worries, wondering what horrors, traps, and temptations will befall our young people in the future.

Tell us little about the characters in Detours in Time.

Tabitha, a.k.a. Pinky, is very headstrong.  She skips meals because she is not hungry and eats according to her moods.  We all know people like that.  She’s also a very artsy type.  Tabitha’s a beautiful young woman who loves to wear jeans and band t-shirts.  Then, there’s Milt.  He is older by twenty years, but never married, a little socially awkward, and just a big teddy bear.  He is a sweet guy with a goofy sense of humor and a brilliant scientific mind.  Both of them care about humankind, but differ on what to do when time travel goes off course.

What was the hardest part of writing this book?
Writing horrible things that the characters may or may not have been responsible for changing.  It had to be horrible, but it had to be believable.

I’d say it was Chapter 15, “The Nanny and Matt.”  I had fun with a character that they meet up with who is a total throw back to another era in history, who also reflects certain social factors such as how accessible a college education might not be for everyone in this future.  I had fun building her attitude and describing her style.

What are your future project(s)?
I’ve already written a sequel to Detours in Time, but I plan to hone it and perfect it later this year.
That may be my next NANOWRIMO project.  It’s a toss-up, because I have ideas for my already published series and moving on with the story.  We’ll see what happens in November!  There is also a plan to publish some paranormal stories in a short anthology, but I think that is mostly ready, I just need time to drum up interest.

"Do you remember telling me once, Milt, that all possibilities existed within any given moment, but the possibility we get to live is the one we choose?"

He nodded. "Yes, I was explaining the theory of multi-verses."

She went on, "And that all other possibilities still exist, we just won't live with them in our reality?" He nodded again.

"Maybe that's the case with Brandon, and his parents." Milt turned away, his mouth turned down at the corners. If this was the closest he ever would get to losing a child, it sure was painful enough. And to think, it was all his own doing. Why did I even need to go there anyway? He thought. Why did I HAVE to know? What the hell is wrong with me? Now I get the knowledge that I may have screwed up that very future, that dream of what might have been. For it was all just a dream, wasn't it? The future did not exist yet. All they had seen, was a future based on a trajectory of events projected from the moment they left in 1997. Obviously Pinky was still able to be optimistic about the future to come, and how it may have been altered.

Author Pamela Schloesser Canepa had a childhood full of travel and moving, fueling her writing of poems and stories as a child to provide entertainment for long trips. After a while, her family settled in the southeast. Writing provided an outlet for private thoughts and emotions for years, until she decided to self-publish fiction in 2016. Pamela's genres include science fiction, paranormal fiction, and poetry of all types. The "Made for Me" series was Pamela's first published fiction series. Currently, Pamela is working on a sequel to her time travel novel.